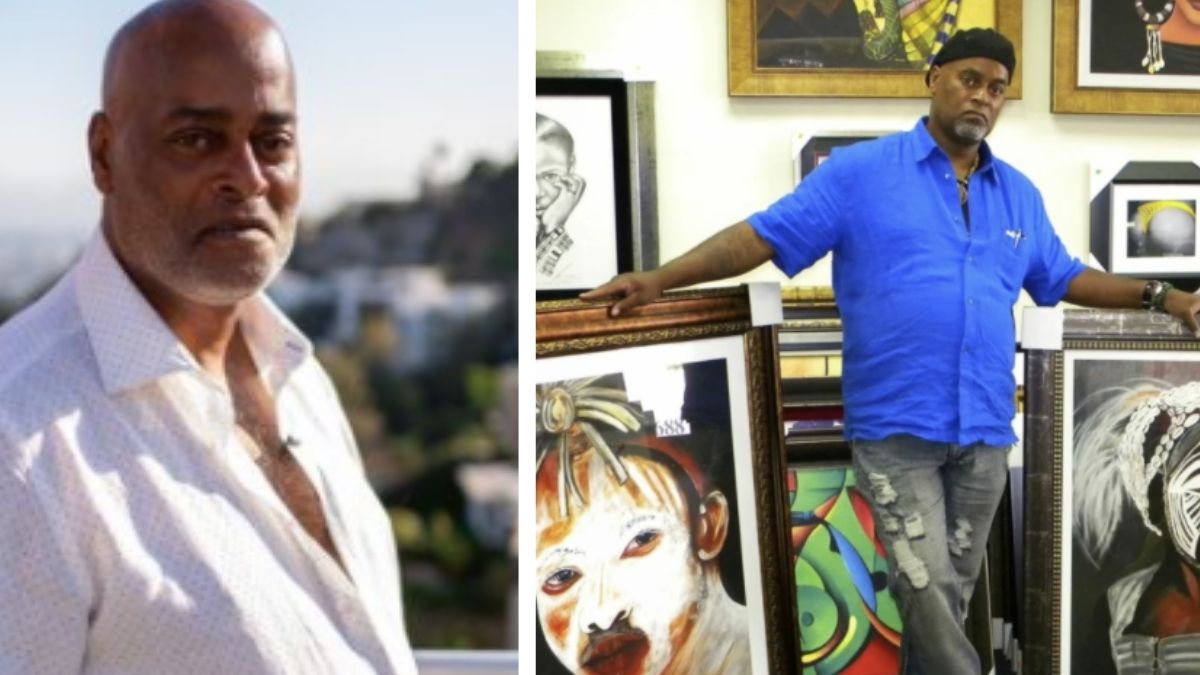 Homelessness is a depleting experience. It drains you of every single energetic fuel in your life and can even try to rob you of your hope. But hope is a powerful force. Hope is the light that shows up in the darkness, and the human spirit has the tenacity to hold onto that hope through the most difficult of hardships.

For one man, Richard Hutchins, homelessness never stole his hope. And in fact, as he puts it, it never “broke” him either.

Richard Hutchins, a talented artist, had grown up in the foster care system. Between his father leaving and his mother never being around, Richard ended up in foster care with little to his name. As a child he was so angry at his family that he began using a fake name.

He eventually got involved with some people who were bad influences during his teenage years. These associations would lead Richard to end up in and out of prison multiple times throughout his life for white collar crime.

Because Richard had no family or real friends to speak of, and felt completely alone in this world, he convinced himself of the fallacy that people will only pay attention to you if you lie and make it sound interesting.

Hutchins then fell in love with art. As his passion for creating grew, he doubted that anyone would show any interest in his artwork without a compelling story. So, Richard decided to create a false narrative to accompany his journey. Richard claimed that he was former NFL player Drew Hill, and that he had become a painter.

Richard is talented, and true raw talent gets noticed with or without a striking narrative. But, Hutchins was going by a false name, and soon he became known as ‘Drew Hill – the celebrity artist.’ He made paintings for Muhammad Ali, Laurence Fishburne, Richard Pryor, Burt Reynolds, and the list goes on.

Despite being hyper aware of his mistake in using someone else’s identity, Richard couldn’t use his own. He had not used his own name since he had left home as a child. He tried to ride the wave and keep this information to himself, but just as a lie often does, it all caught up with him.

An LA times reporter wrote an exposé revealing the truth behind the man who claimed to be ‘Drew Hill – the celebrity artist’ and Richard was sent to prison. But Richard made a promise to himself that this stay in jail would be his last. He decided then and there that he would live in his truth and own who he really is: Richard Hutchins.

While in prison, Richard’s passion for creating did not wither away, and, if anything, he was more inspired than ever before. Using the materials at his disposal, Richard created breathtaking artwork with just envelopes, M&M’s, Skittles, Kool-Aid, toothpaste and coffee grinds.

And then, Charlie ‘Rocket’ Jabaley, from the Dream Machine Foundation teamed up with Dreamr and made the incredible happen.

Richard’s dream, as he says in an Instagram Reel, was “to walk in a museum one day and to see one of my paintings hanging on the wall.” Little did Richard know, Charlie was about to make his dream come true.

Charlie, a former music manager, launched a website showcasing and selling Richard’s art in an effort to secure Hutchins’ financial future. Charlie’s goal was to get Richard off the streets for good.

Oprah not only supported Richard by buying an original piece of his, but she also surprised him with a personal meeting over video chat and encouraged Hutchins to raise his prices.

Charlie then organized a sold-out red carpet art show in Beverly Hills where Richard Hutchins was the featured artist. Richard showed up to the event looking sharp in a new suit to the roaring sounds of the crowd chanting his name with excitement.

“Hey guys, 5 days ago I was homeless. What I didn’t do, I didn’t give up my dream. I didn’t lose hope. My spirit wasn’t broken. This night is not for me. It’s for every homeless person or homeless artist that is left on the streets out there. This is for them, and I promise to this end I will pay it forward. I promise that.”

Homelessness does not mean hopelessness. The experience is by no means natural to the human soul, but it does not strip you of your rights, dignities, and personhood. Nothing can.

Creative spirits will yearn to create in all environments, but especially the intense ones. Art carried me through my experience of homelessness. Artists will default to expression when our backs are up against the wall. We will use any free moment or resource to create, and we will do so for our survival.

Homelessness didn’t stop teaching me lessons once I got off the streets. Homelessness teaches me lessons every single day. That experience can happen to anyone, but most importantly, anyone can also recover.

Homelessness does not define you. Second chances are more than possible, they happen every day.

Richard is being recognized for being Richard. His raw talents are carrying him to the places he always knew in his heart he could see. His experience was never limited to homelessness, and he knew this in his heart all along.

No matter what your current, past or perceived future situations, remember that things can change in an instant. Pursuing your passions in life can carry your spirit through the most volatile of storms.

Stay true to yourself, no matter what the situation. Survival, even when physically at risk, is highly mental. And your pursuit of your passions and commitment to your dreams is more than just your imagination at work, but it is your spirit guiding you towards building an authentic life that you can love.

Never give up on a dream. it just might be the foundation to change or save your life.

Every Parent Needs To Know THIS One Simple Truth | Dr. Shefali | Inspiring Women of Goalcast
The Secret To A Life Worth Living | Powerful Motivational Speech by Tom Bilyeu
Jordan Peterson’s Ultimate Advice for Young People | JOURNEY TO SUCCESS
You Have The Power To Be A Point Of Light | Tyler Perry Inspirational Speech | Goalcast
How to Persist, Be Patient and Succeed | Jordan Belfort | Goalcast