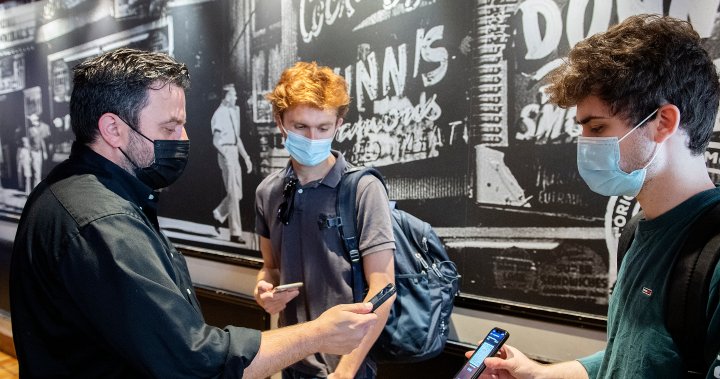 As protests against a domestic COVID-19 vaccine passport got heated in British Columbia, some Canadian restauranteurs say there are concerns about enforcing the new requirement.

Meeru Dhalwala, the chef and co-owner of Indian restaurant Vij’s in Vancouver, said she is expecting some “difficult” customers, as she saw during the previous waves of the pandemic concerning mask policies. She said she will be careful with serving alcohol as that can loosen lips.

“I think we’re always going to have that 10 per cent,” she said, referring to customers that may not be co-operative. “But again, we happen to be in an industry where we kind of have to have a thick skin about that.”

Dhalwala said a lot of restaurants in B.C. are asking whether there is a special number they can call for assistance if resistance to the new system gets out of hand.

Already, the National Police Federation, the union representing RCMP officers, said it is concerned about resources being strained if the force gets a flood of calls asking for assistance enforcing the vaccine passport.

B.C. Premier John Horgan has said businesses who have “difficulty” with patrons refusing to show proof of enforcement can “call law enforcement,” but a representative for the NPF said, “We can’t just have the answer (be) always call the police.”

Dhalwala said Vij’s has had to hire a second experienced manager to help enforce the passport, which will cut into the restaurant’s bottom line.

“Now we’re going to be spending more money monitoring the vaccine passport,” she said. “Just in case we do have some customers that are tired of waiting or getting agitated or irritated, we’ve got somebody else who has some authority to deal with that.”

Both Vancouver and Kelowna recently saw mass protests against the vaccine passport outside of a number of hospitals, with protesters in Vancouver chanting “lock her up,” referring to B.C. chief medical officer Dr. Bonnie Henry — a play on similar chants done at former U.S. president Donald Trump’s rallies.

One Vancouver restaurant Global News spoke to asked post-interview to not be named due to fears of being targeted for showing support for the passport.

“Never in my life have I done this but after the shenanigans in Vancouver from anti-vax protesters, I do not wish to bring any misery on my staff or business,” the source said.

The restaurant said its only concern with the new restrictions is from people who feel “their rights are infringed upon and that they shouldn’t have to be vaccinated or show a passport.”

“The concern there is with conflict and stress on ourselves,” they said. “There is definitely some stress and anxiety there that [enforcement] could be an issue.”

In Toronto, restaurant Bar Vendetta has become the target of weekly protests by a group against vaccine passports after owner Jen Agg tweeted her support for the system in Ontario in July.

“It’s not fun for our servers to be screamed at and called Nazis and for me either,” Agg previously told Global News. “They will chant my name, they will call me the queen bigot.”

Ontario has announced it will be requiring proof of vaccination for restaurants beginning Sept. 22, while B.C. will implement its system beginning Sept. 13. Both Alberta and Saskatchewan are opposed to the idea, and there are no plans for a vaccine passport in any of the Maritime provinces or the northern territories.

So far in Quebec and Manitoba, where vaccine passports have begun for restaurants, industry association Restaurants Canada said there have been no reports of harassment.

Read more:
‘Like a pinata.’ Businesses exposed to harassment without vaccine passports, some warn

“I think that people understand it,” said vice-president Olivier Bourbeau. “You know what, we are just enforcing what we are asking to enforce.”

Despite fears of backlash, ultimately the restaurants Global spoke with are in favour of the vaccine passport as it is better than having to close completely due to a lockdown.

Vij’s Dhalwala just sees it as another hurdle for restaurants in the ongoing pandemic.