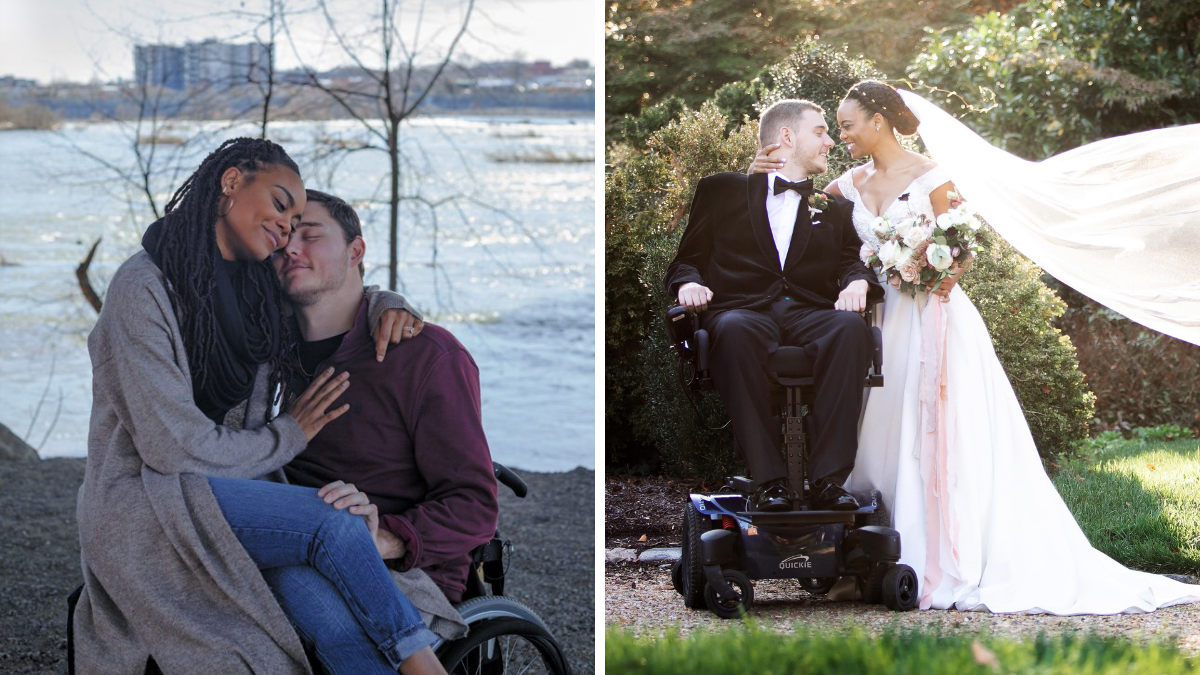 Cole Sydnor and Charisma Jamison had been the fascination of the internet for quite a while before finally consecrating their love with a beautiful wedding.

He had a tragic accident as a teenager

Cole Sydnor was 16 when he had a tragic accident. He was playing in river rapids with some friends and hit his head on a partially-submerged rock. Sydnor had broken his neck and was diagnosed as a functioning quadriplegic, meaning he’d completely lost function of his hands, torso, and legs. He also has limited function in his arms, wrists, and shoulders.

Sydnor thought his condition would prevent him from finding love, but in 2017 at an inpatient rehab technician at Sheltering Arms Physical Rehabilitation Centers in Richmond, Virginia, Sydnor met Charisma Jamison, his future wife.

Charisma cared for him at a rehab facility

Jamison was tasked with helping Sydnor after a workout on an electric bike, which helps stimulate his legs.

“I had electrical pads on my legs, buttocks, and I was exhausted and sweaty,” Sydnor told The New York Times. “It was not the first impression I was looking for.”

But Sydnor had unknowingly made a good first impression.

“It was very easy to look past physical limitations being in my career,” Jamison said. “And the fact that Cole was super attractive didn’t hurt.”

After meeting again at a gala, Sydnor slid into Jamison’s dms and the two started dating.

They proved everybody wrong

At first, friends and family questioned what it was like dating a quadriplegic. Others judged them. But the couple wanted to show everyone that love is love, so they started a YouTube channel, Roll with Cole & Charisma, to show what it’s like.

As the couple continued to date, their love grew.

“The fact that every date we had was fantastic, every moment was electric, made it so easy,” Jamison told The Times. “We both realized this was going to be it.”

As their love grew, so did their YouTube following, which now stands at 615,000 subscribers with some videos, including one of Sydnor standing with the help of an exoskeleton, reaching over 1 million views.

“We had started to receive a lot of positive comments,” Sydnor said. “It’s been exciting to share a new manifestation of love with the world. As an interabled and interracial couple, we’re proof that love can be found anywhere.”

“I just want to share with people that love comes in all shapes, forms, and sizes, and no matter the shape it takes, it’s beautiful.”

On November 7, 2020, the couple consecrated their love with a beautiful marriage ceremony in front of a small group of close friends and family. In the couple’s vows, they expressed the miracle of finding one another in these circumstances.

“For the longest time I didn’t think you were out there,” Sydnor said, as reported by The Times. “Someone so selfless and caring, so beautiful inside and out. From our first date, I could see that in you and every day since, I’ve felt my love for you grow deeper. I promise to never let that love stop growing.”

“You have one of the sweetest souls and a smile that makes any day the best day,” Jamison said in her vows. “You have shown me the true meaning of patience, commitment, and love, and I fall more in love with you every day. You are my best friend, my partner in crime, the love of my life. Through whatever life throws our direction, like the year 2020, I will always be at your side. I love you.”

What a beautiful story and a beautiful message! In an instant, Sydnor went from being an active teenager to living as a quadriplegic. But he didn’t give up and with the help of his caring partner, the couple has defied expectations, proving that love can shine bright under any circumstances.