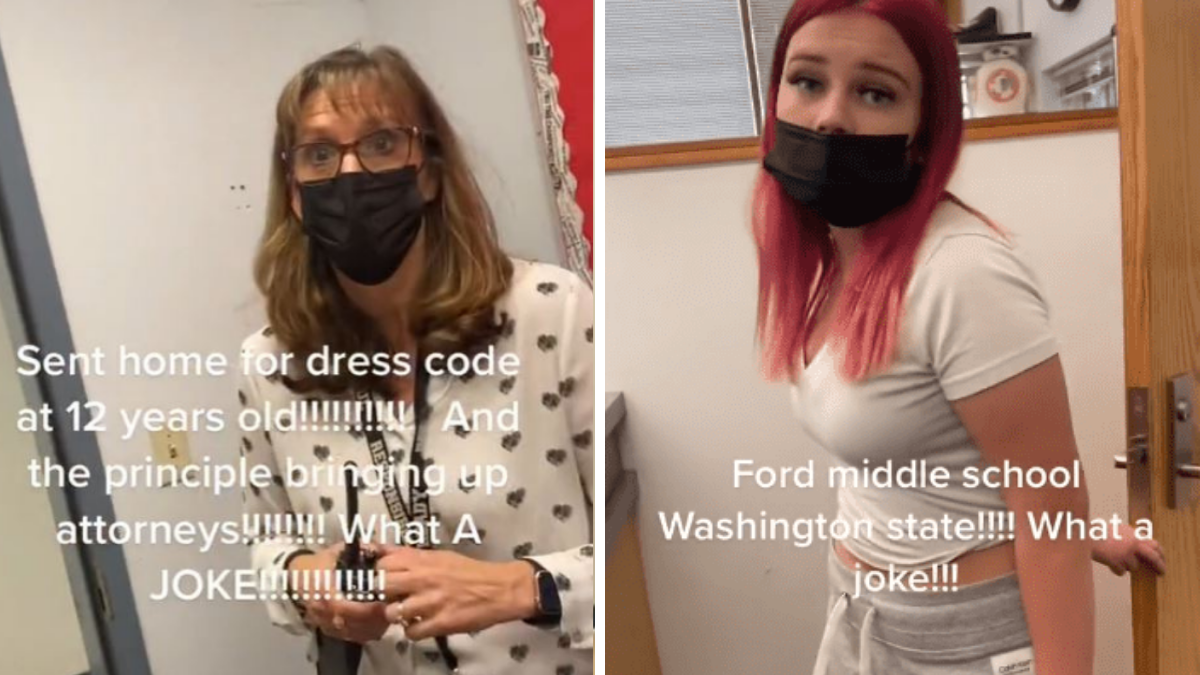 The principal at a Washington middle school sent a tween home for allegedly violating the dress code — a reason the girl’s mother refused to accept.

A Washington mom couldn’t believe it when she was told her 12-year-old daughter was being sent home from her Washington middle school. So, she filmed it and posted videos to her TikTok account, @khalesei_holt.

The first video, which has more than 2 million views five days since being posted, shows her daughter in the office in a white t-shirt and grey sweatpants. It also shows the office secretary threatening to call security on the mom for filming the ordeal.

Mom faces off with the principal

In a second video, which has a whopping 10.3 million views, the mom appears to be arguing with the principal about the suspension and whether or not she’s allowed to record.

“But she’s still going to go class” asks the Mom. “Not right now,” the principal replies.

The mom pushes back, “So you’re taking her education away over her dress code?”

Written on the screen are the mom’s words:

“Sent home for dress code at 12 years old!” And the principal brings up attorneys? What a joke!”

What rule was she breaking?

In a third video, the mom appears to post the school dress code, which says:

“Preserving a beneficial learning environment and assuring the safety and wellbeing of all students are primary concerns of the Board of Directors. Students’ choices in matters of dress should be made in consultation with the parents,” read the school handbook. Student dress shall only be regulated when, in the judgment of school administrators, there is a reasonable expectation that: a) health or safety hazard shall be presented by the student’s dress or appearance, including possible membership in a gang or hate groups. b) material and substantial disruption of the educational process will result from the students’ dress or appearance.”

Several wrote about how the girl was fairly suspended for breaking the dress code.

“Probably because of how low cut her shirt [is] yall push this far I do see how that shirt can be an issue if she jumps a little too much or,” one comment read.

“There’s a school dress code for a reason and always has been this newer generation just can’t stand it lol we all dealt with it,” said another.

Others wrote how the mother didn’t handle the situation appropriately.

“This is why children have no respect for authority because the parents do not,” one said.

But many backed up the mom, pointing out that her outfit isn’t that revealing.

“she’s literally wearing a tee [shirt] and sweatpants… what are y’all saying is inappropriate?”

“students outfits don’t distract anyone but the teachers,” another wrote.

“My thing is why are GROWN ADULTS looking at a minor’s body? Yet there are cheerleaders wearing revealing outfits and ‘it’s not against dress code?’”

Now, we don’t know all the details of every story because we weren’t there — it’s possible that the t-shirt and sweatpants we see the 12-year-old wearing wasn’t the outfit she was being suspended for. Still, the pattern is clear. School dress codes are unfair to girls and need to be updated to treat their students more fairly. In the meantime, parents have every right to stand up for their kids.

Jordan Peterson’s Ultimate Advice for Young People | JOURNEY TO SUCCESS
Morning Routine to Activate Your Brain | Jim Kwik | Goalcast
The Secret To A Life Worth Living | Powerful Motivational Speech by Tom Bilyeu
You Have The Power To Be A Point Of Light | Tyler Perry Inspirational Speech | Goalcast
Every Parent Needs To Know THIS One Simple Truth | Dr. Shefali | Inspiring Women of Goalcast