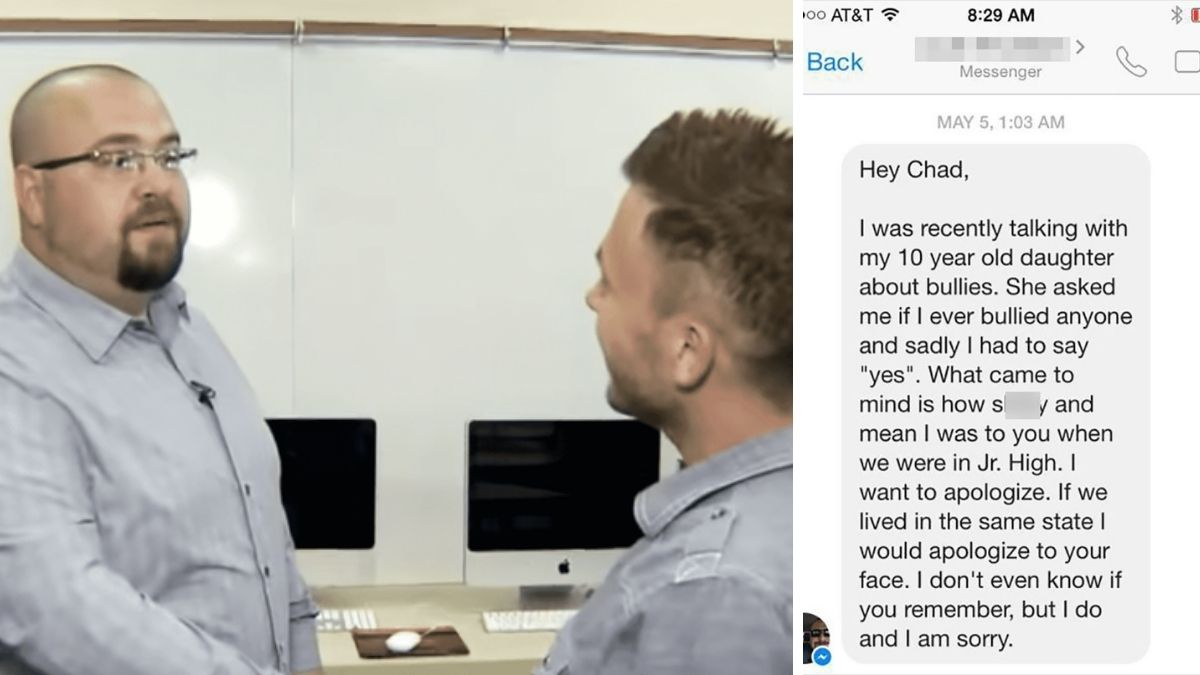 Louie Amundson got a major wake-up call about his actions as a teenager and it’s all because his daughter asked him one question. This story of redemption proves that it’s never too late to say sorry for your past mistakes.

Louie’s daughter was working on a skit about bullying — why kids bully, what to do if you’re bullied, etc. So she turned to her dad and asked if he was ever bullied. He said yes.

“She then asked if I had ever bullied anyone else, and I had to think about it for a minute and that’s the first time I had thought about it in 20-plus years, so I answered honestly and said yes,” Amundson said, according to InspireMore.

Amundson realized what he had to do. He’d attempt to make amends with the person he bullied, despite it being 20 years later.

Chad Michael Morrisette, a brand consultant in West Hollywood who grew up in a small town in Alaska, remembers being bullied.

“The entire football team bullied me,” he told InspireMore. “It wasn’t one guy, it was six or seven guys who would follow me in the hallways, harassing me, insulting me, threatening my life.”

One of those bullies was Amundson. He followed Morrisette around their junior high school, threatening him.

So Morrisette was completely shocked to wake up one day with a text apology from Amundson.

“Hey Chad, I was recently talking with my 10 year old daughter about bullies. She asked me if I ever bullied anyone and sadly I had to say ‘yes’,” the text read. “What came to mind is how sh***y and mean I was to you when we were in Jr. High. I want to apologize. If we lived in the same state I would apologize to your face. I don’t even know if you remember, but I do and I’m sorry.”

Explaining why he sent the apology, Amundson said, “You can’t change your past, but you do still own it.”

“I can’t take back the names I called him, and the threats I made toward him, but I can apologize,” he added.

“It doesn’t excuse my behavior as a child in any way, but as an adult it’s the best I can do to try to make it up to him.”

Morrisette said the note completely floored him, but after a day or two of letting it sink he realized it had healed a deep scar he’d almost forgotten.

“It unlocked something in me I didn’t realize I’d been holding onto,” he said. “I cried a little bit. It was so moving.”

Morrisette responded the next day.

“Louie, I’m quite moved by this. Thank you and [I] accept your apology. In 20 years you are the only person to apologize for being a bully to me when we were younger. I hope you can proudly tell your daughter that you have also apologized for it, and that we are good. It’s amazing what 20 years and children can do to us, no? Thank you again, and I hope you stand up to bullying anytime you see it. Have a great day!”

A half an hour later, Amundson responded.

“Thank you. Your forgiveness means more than you know and I hope I am [not] the last to ask forgiveness with you. Cheers!”

Reflecting on the Morrisette’s response, Amundson said he never expected to be forgiven.

“(I was) humbled and ashamed and relieved all at once,” he told InspireMore. “I owed him that apology, he did not owe me his forgiveness. The fact that he was able to forgive me showed that I may have been the bigger kid, but he is the bigger man. I really didn’t expect him to respond at all, and figured if he did it would be telling me where to stick the apology, kind of like ‘too little too late.’”

The two men said they hope their situation can help kids understand the repercussions of bullying.

The power of an apology

What this story proves is that, as Justin Bieber sings in his famous hit song, it’s never “too late now to say sorry.”

Sure, Morrisette might have forgotten about being bullied and gone on to lead a successful life. But even if he didn’t realize it, he had scars from his past that Amundson helped mend.

Take accountability for your actions

We all make mistakes but it’s how you own up to them that matters.