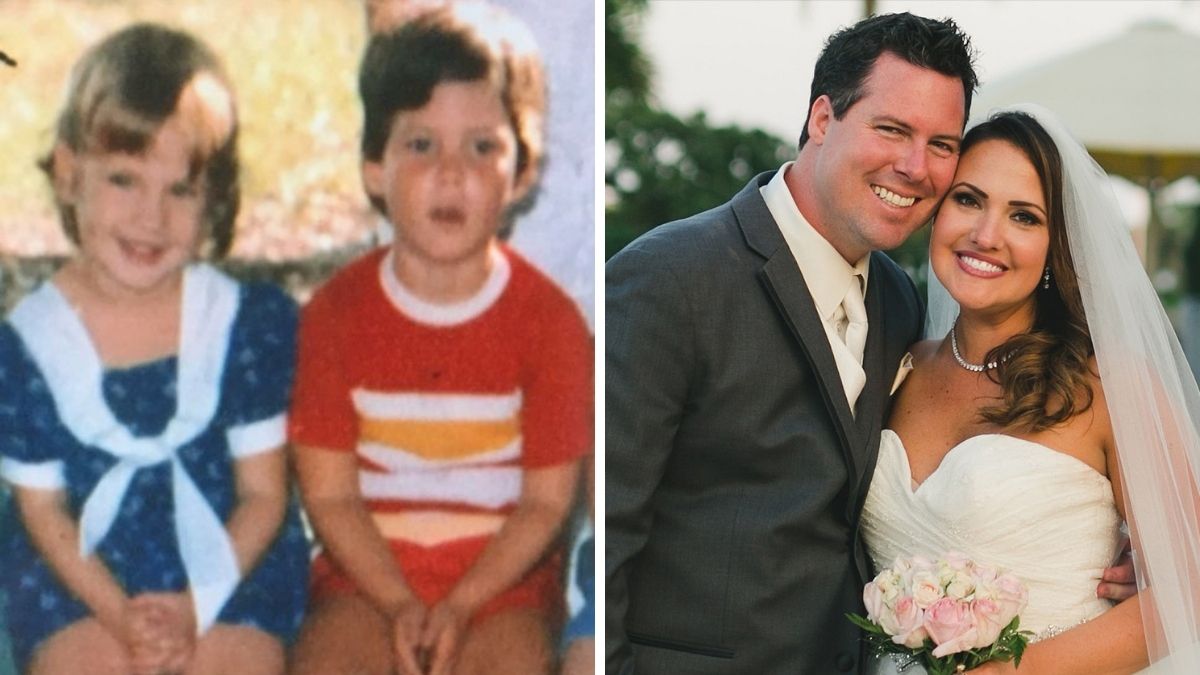 When Amy Giberson and Justin Pounders were in pre-kindergarten in St. Petersburg, Florida, they’d play tag and build blocks together. They say that a “shy” romance developed when they were 3 years old, but they attended different schools growing up and drifted apart.

Then 30 years later, the two matched on an online dating site.

Fate had other plans

Justin said he felt an instant connection to Amy when he first saw her profile on the dating site.

“I saw her photo and for whatever reason, was instantly drawn to her,” he told People in a 2015 story. “She just had this great energy, you could tell. I can’t explain it, but I knew I had to get to know this girl.”

The couple went on their first date to a restaurant and sparks flew.

“Of course, at that point, we still didn’t know we had been pre-K sweethearts, but when we met up and we hugged, it was like I had known him my whole life,” Giberson said.

“When I first saw him, I felt that I was staring at the man I was going to marry.”

They didn’t realize they knew each other

A year into dating, Justin joked that he had a crush on a girl in preschool named Amy.

But it wasn’t a joke. The two had actually been in the same pre-kindergarten class and their parents dug up the photos to prove it.

“Justin’s mom found a photo of the two of us together and I just started crying, I was ecstatic,” Amy told People. “I was the Amy he had liked all those years ago! It was definitely meant to be.”

Shortly after the improbable modern love story came out online, the couple appeared on The View and Justin recruited kids at their former pre-school to pop the question for him.

In unison, the toddlers said, “Amy, will you marry me?”

She said yes, of course.

“I truly feel it was fate!” Amy told People in a 2016 story. “Our hearts met at the age of 3 and we had our own journeys to go through for 30 years, but ultimately our hearts were meant to love each other.”

“Everyone wants a dream love story, and somehow it happened to us!”

Grateful for her love story, Giberson had a message for others looking for their match.

“Always keep your heart open to love, because you never know when you’ll find it,” she said.

Love will find a way

Sometimes even the best romances don’t work out because their lives are on different trajectories. And that’s what nearly happened in this story. But incredibly, they found each other again, proving that love will always find a way if it’s meant to be.

“Whatever our souls are made of, his and mine are the same.” – Emily Brontë

Jordan Peterson’s Ultimate Advice for Young People | JOURNEY TO SUCCESS
The Secret To A Life Worth Living | Powerful Motivational Speech by Tom Bilyeu
You Have The Power To Be A Point Of Light | Tyler Perry Inspirational Speech | Goalcast
Every Parent Needs To Know THIS One Simple Truth | Dr. Shefali | Inspiring Women of Goalcast
How to Persist, Be Patient and Succeed | Jordan Belfort | Goalcast