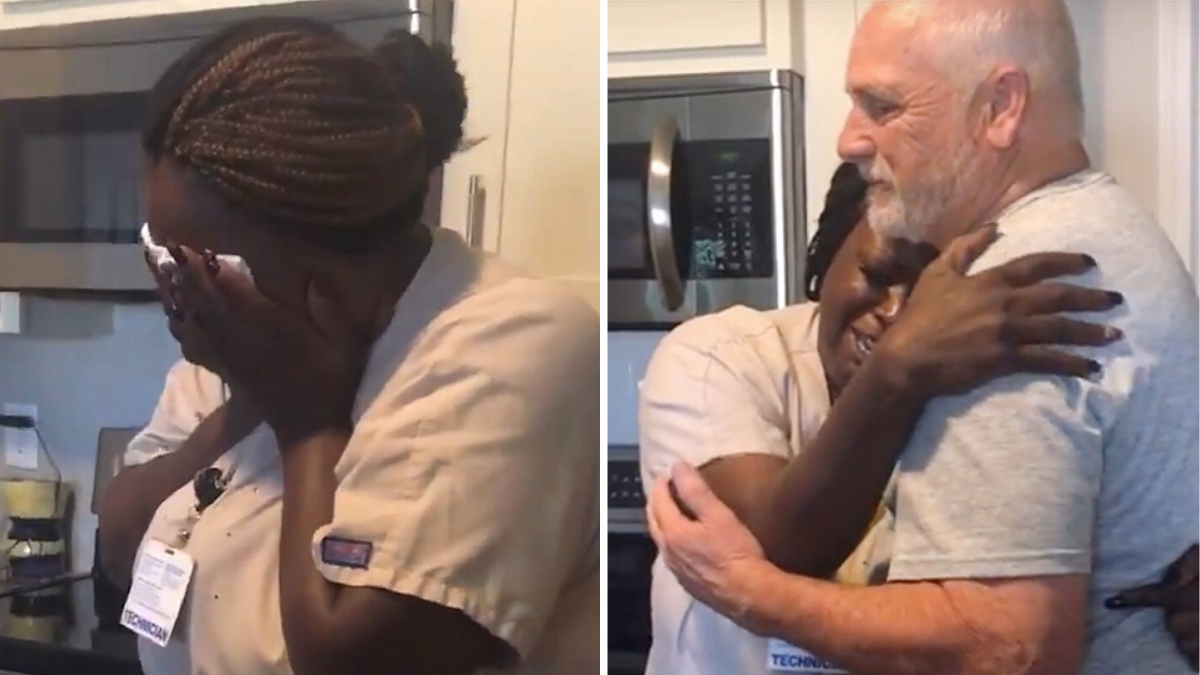 Back in 2014, Georgian native Chris Wright was driving his family to church in the rain. Along the way, he spotted a woman walking along the side of the road with a gas can in her hand. Knowing the closest gas station was still quite far away, he dropped off his family and circled back to pick the woman up.

Turning the day around

For her part, TunDe Hector was going through an extremely hard time. She was in the middle of a divorce and struggling financially, and when her car ran out of gas she had only five bucks in her pocket. Her only option was to walk to the closest gas station. So when Wright pulled over to help her, it was a life-changing act of kindness.

“I was being tugged on the inside again and felt the Lord say, ‘Whatever you have in your pocket just give it to her. She needs that,'” Wright later told ABC News. “I gave her the $40 and she cried and I didn’t know if I’d ever see her again.”

I felt like it was what I was led to do at that point.

According to Wright’s wife, Carmen, her husband always had a big heart but he’d never felt compelled to help a stranger like that before. “You know when you have an urge and a desire to do something good?” she told CBS News. “He was raised that way. He’s kind and generous to everyone. He’d never picked up anybody before, but he felt compelled.”

Although neither of the strangers knew it then, that wouldn’t be the last time they saw each other.

More than a coincidence

Three years later Wright’s mother, Judy Wright, began to suffer from complications due to Parkinson’s disease. After she was discharged from the hospital, Chris and his father decided they needed nursing aids at home in order to help take care of her.

One day, Wright’s parents called him to gush about one particular aid who had come to the house, despite not being scheduled to be there.

“My dad called me after she leaves and said, ‘Hey, I got a lady that we need to use because for whatever it is, there’s something different about her. I feel better when she’s in the house and your mom loves her as well,'” Wright recalled to ABC News. So he reached out to the aid and arranged a time to meet.

Wright and Hector found themselves face-to-face again, although they didn’t recognize each other at first. But when Hector recalled the story of the kind man who helped her that rainy day, he couldn’t help but tear up.

“That was me,” Chris admitted. They both took off their hats and realized their past connection.

We just cried and had a moment right there.

In their hearts, they knew the meeting was more than a coincidence. Wright felt as though Hector was a guardian angel sent by God to help his mother during her time of need.

According to Wright, Hector treated his mother with respect, dignity, and care, often going above the call of duty and even stopping by after hours to help her out.

When Judy died on July 9, 2017, Hector left her own birthday celebration in order to be with the Wright family. Then and there they decided to help Hector with her dreams.

They started a fundraising campaign in lieu of flowers with the goal of $1,000. Hector had spoken of wanting to complete nursing school to become an OBGYN nurse, but her tuition was past due and she also had a family to care for. The story caught on, and within 45 minutes the family had reached its goal. Less than a week later the word had spread and the account swelled to $8,000. A few days following that it was at $34,000.

Inspiring others to give back too

The heartwarming story doesn’t stop there. Ellen DeGeneres brought Wright and Hector onto her daytime talk show, where Hector was presented an additional $10,000 and Wright and his father were gifted a golfing trip.

These days Hector is paying it forward by spreading messages of hope on her podcast, Unusual Blessings. She has also written a book of the same name that highlights her life story and all of the people who helped her achieve her dreams.

It just goes to show you that sometimes what seems like a random act of kindness was always meant to be. Even the smallest acts can make a monumental difference in someone’s life, whether it’s buying a coffee for that person behind you at the drive-through, letting someone in front of you at the check-out, or gifting someone a small present just to let them know you’re thinking of them.

Kindness Has a Lasting impact

One small act of kindness can influence someone’s life in a big way.

How to Persist, Be Patient and Succeed | Jordan Belfort | Goalcast
Morning Routine to Activate Your Brain | Jim Kwik | Goalcast
The Secret To A Life Worth Living | Powerful Motivational Speech by Tom Bilyeu
Jordan Peterson’s Ultimate Advice for Young People | JOURNEY TO SUCCESS
You Have The Power To Be A Point Of Light | Tyler Perry Inspirational Speech | Goalcast