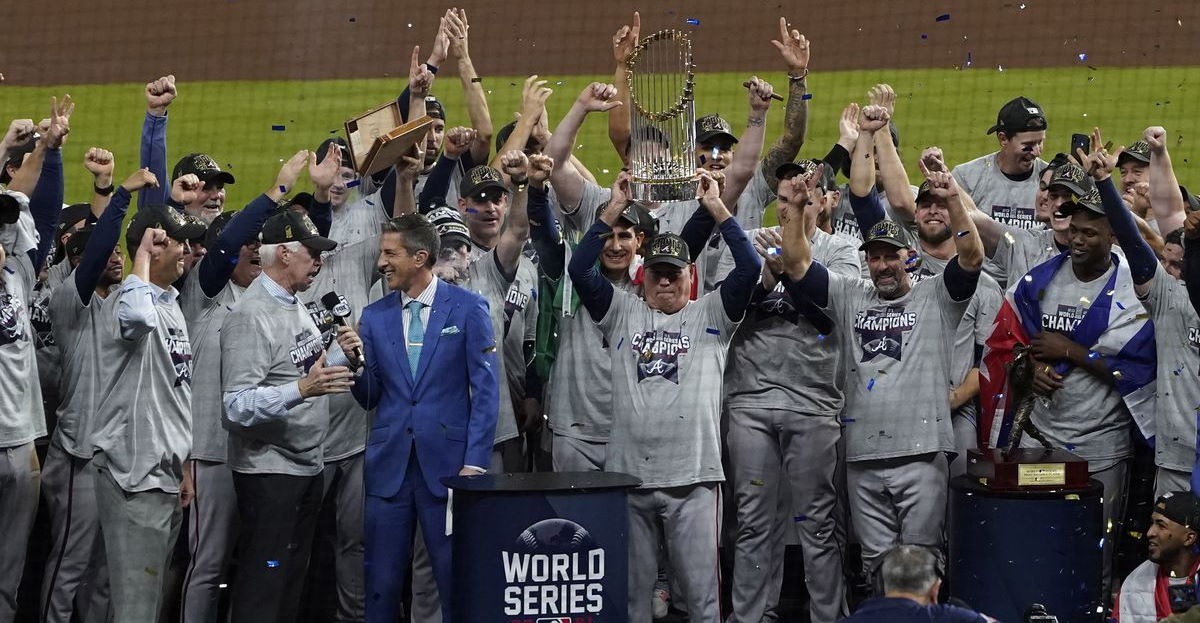 In Major League Baseball’s postseason playoffs, a player is chosen as the Most Valuable Player (MVP) in each series, culminating in the MVP of the championship round, the World Series. But at times it seems that the most valuable person for a sports team’s success wasn’t a player at all. Some years it was a coach or manager’s strategic moves during the games that made the biggest difference.

This year one could make the case that the key person wasn’t on the field at all—in fact, he wasn’t even at the ballpark for several of the final games due to coming down with COVID-19 (yes, he was vaccinated). That person is Atlanta Braves General Manager Alex Anthopoulos.

The general manager of a baseball team has many duties, but the most important—and the one they are most known for—is to essentially serve as the head of talent acquisition for the team. I don’t mean they are in human resources and head up talent acquisition for the entire corporation that runs the team. I’m talking about the on-the-field talent, most notably the players, but also including the team manager and coaching staff.

It was the strategic decisions made by Anthopoulos, including four key talent acquisition moves during the season, which were critical to the Braves ultimately achieving the pinnacle of baseball success in 2021.

A difficult start to the season

In many respects, the 2021 Atlanta Braves were improbable champions. Few baseball experts chose them at the beginning of the season to go all the way. And they got off to a bad start during the first three months of the season (which is nearly the first entire half) by posting 38 wins and 41 losses.

Things got much worse on July 10th, when their best player, outfielder Ronald Acuña Jr., suffered a season-ending right knee injury. The team was already missing a key starting pitcher (Mike Soroka) and another key outfielder (Marcell Ozuna, the National League’s home run leader in 2020), so this was devastating.

The end of July in Major League Baseball is the trade deadline: the last date that teams can trade players for the rest of that season. After Acuna’s injury, many baseball pundits wondered how far the Braves would sink in the standings, and whether they would become “sellers” at this deadline, meaning they would trade some of their best current talent to contending teams in order conserve cash and gain some younger players.

No doubt Anthopoulos considered this strategy of essentially giving up on 2021 and looking to the future. But instead, he took a different approach, acquiring several players who would change the course of the team’s season and ultimately play key roles in winning them their first World Series championship since 1995.

The talent acquisition decisions that made the difference

The key need that the Braves faced in mid-July of 2021 was upgrading their three outfield positions. Stars Acuna and Ozuna were out, and the other players they had been using at right field, center field, and left field were not performing well. Any young, up-and-coming outfielders that the team had in their minor leagues—the next generation of players that are being developed—were not deemed to be the answer to the problem. So Anthopoulos made the unprecedented decision to trade for not just three but four outfielders within the span of two weeks.

Like any skilled talent acquisition leader, Anthopoulos looked far and wide, ultimately making trades with four separate teams (Dodgers, Indians, Marlins, and Royals.) In each case, the Braves did not have to part with much in terms of current talent or future prospects, but the dividends for their 2021 season would turn out to be significant. The Braves won 18 games and only lost eight in August, and then won another 18 games with only 11 losses to finish the season with an 88-73 record. While not elite by baseball standards, it was good enough to win the National League East division, thereby giving them a spot in the playoffs.

The four new outfielders were each important to this dramatic rebound in their own way:

Beyond their importance for turning around the Braves’ fortunes in the second half of the season, the role of these four players in the playoffs and World Series was historic:

In summary, without these four new players it’s highly unlikely that the Braves would have rebounded so well in the second of the season, won the National League East Division, and ultimately the World Series championship.

Are you 4 players away from winning your World Series?  Three talent lessons from the champs

There are of course many differences between a Major League Baseball team’s roster of players, and a non-sports organization’s group of employees. Businesses usually have annual and quarterly goals that flow 365 days a year, whereas baseball teams have discrete seasons with an off-season of down-time.

Compared to the talent pipeline for a professional sports team, organizations must leverage a broad range of talent sources to fill an even broader set of roles. Nonetheless, there are several lessons that non-sports organizations can learn from Anthopoulos’ talent and team-building success:

Research from the Institute for Corporate Productivity (i4cp) has found that using people analytics data to create profiles of high-performing employees, and then match those profiles to candidates when recruiting talent is a next practice (a strategy correlated to superior performance but not yet widely adopted by most organizations). Another recent trend in assessing internal and external talent is to rely more heavily on assessment results and to look for adjacent skills that analytics deem relevant. Doing so has the added benefit of minimizing any potential bias that a heavier reliance on formal degrees and strict job experience requirements can create.

After their World Series success, Atlanta Braves manager Brian Snitker said: “Overall, in my experience, this is probably the best I ever witnessed about how a general manager went after this. I always say the only thing [Anthopoulos] is guilty of is he never stops trying to make this thing better.”

If you can say the same about your organization’s talent leaders, then you’ve got a good chance of having championship-level success in your industry.

Tom Stone is a Senior Research Analyst at i4cp, and co-author of Now Taking the Field: Baseball’s All-Time Dream Teams for All 30 Franchises (ACTA Sports, 2019).