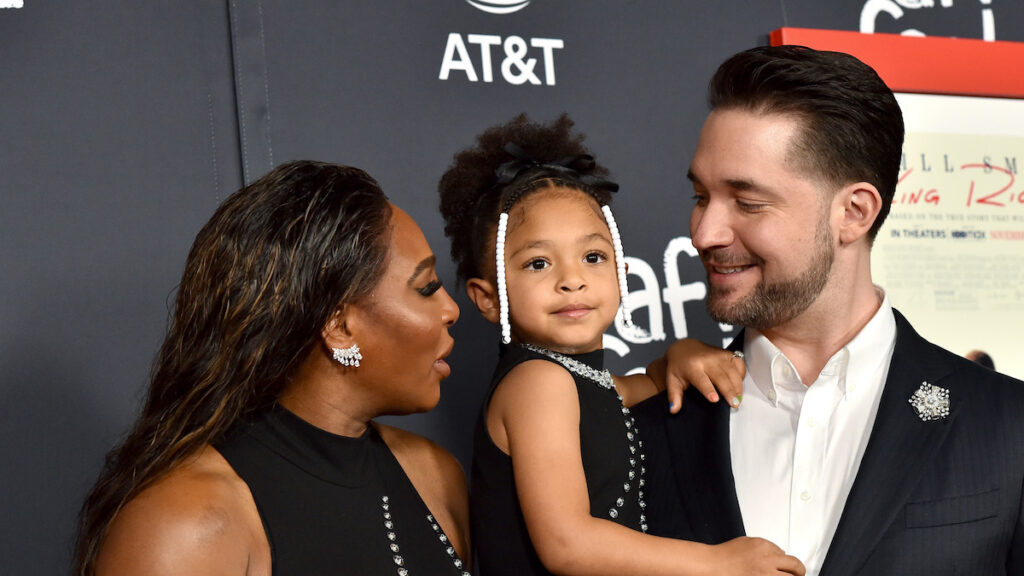 Serena Williams is quite literally the most prolific athlete of our times.

There isn’t a single record she hasn’t broken, a glass ceiling she hasn’t shattered, and an opportunity she hasn’t seized and completely crushed. She’s received unprecedented acclaim from nearly every single section of society, but it still doesn’t feel enough, especially in light of the undeniable impact she’s made on tennis and sport in general.

In recent years, a lot of the focus has turned to her husband, Alexis Ohanian. Their relationship is thought to be fairly unconventional in today’s culture, even with the progress that’s taken place in matters of gender equality over the last decade or so. Their sweet, loving partnership, which the two haven’t been shy in showcasing, has been singled out by the press time and again, but it’s not often that they delve into Alexis’ thought process and decision-making.

The more you learn about his understanding of masculinity and marriage, the more appreciation you develop for their unique arrangement. Here’s what we can learn from Alexis Ohanian and his point of view.

The first thing to note about Alexis Ohanian is that he isn’t just some trophy husband who had no choice but to surrender to Serena’s enormous career.

He’s the co-founder and executive chairman of Reddit and has developed and launched a number of other enterprises on the side, including venture capital firm Initialized Capital, travel search platform Hipmunk, and niche merchandise website Breadpig. He’s an influential entrepreneur and philanthropist in the tech space, so he could have easily rested on his laurels and tried to maintain a ‘balance’ between work and family, as many men do.

Yet Alexis didn’t want to go the easy route. He wanted to be the best possible husband to the woman he calls the “greatest mom of all time.” In an eye-opening essay for Glamour, Alexis credits his mindset to his mom and dad and how they instilled in him a passion for “showing up” and putting in an effort day in, day out. He realized early on that it was going to be an uphill battle to get quality time with Serena, seeing how they both had hectic schedules that always kept them “on the road.” That’s why he and Serena always planned out their calendars in advance: to ensure there “isn’t more than a week that [they] go without seeing each other.”

By watching [my parents] up close, I learned what it means to be supportive, how to make compromises without sacrificing yourself, and how to show up in the ways that matter.

However, when their daughter Olympia was born, their dynamic shifted to a whole new level. Alexis was lucky enough to take 16 weeks of paid leave, which enabled him to discover the beauty of fatherhood in its most powerful form. Since then, he’s undertaken the role of a “business dad” where the lion’s share of his energy is fixated on his daughter and whatever his wife requires from him. It’s not that he’s entirely retired from his profession but more that he understands the necessity of making “compromises” for the sake of the family. He does say he’s “fortunate to be his own boss,” which extends freedoms such as bringing Olympia into the office or working remotely, but also acknowledges that Serena’s work does take precedence in the grand scheme of things.“At the end of the day, sometimes her career really does have to come first,” he wrote on Glamour.

He admits Serena’s career does “come first,” but their partnership isn’t a one-way street, either

Since welcoming Olympia, Alexis has become a staunch advocate for paid paternity leave and encourages other men to prioritize and truly value what it means to be a dad. They shouldn’t be ashamed if they’re left to do what is traditionally known as “women’s work.” Taking care of your child should be an intuitive feeling — you’re not supposed to consider social stigmas or how they interfere with your presentation of masculinity. As Alexis writes in the essay, “If you need to make more money than your partner to have confidence, then I think there’s something more going on under the hood.”

If your “swagger” relies on seeking validation from archaic gender roles, it’s probably not real in the first place, as per Alexis. Despite social changes that have taken place over the last fifty years, many men still pride themselves on being the breadwinner in the household. Childcare is a secondary hobby for many of them, which is why we should celebrate Alexis’ approach to what he deems as a necessary evolution of our culture.

I know I’ve been successful in my career, but I’m not the one racking up the trophies. It helps that my wife and I both know what it takes to be successful and bring that mutual understanding, drive, and relentlessness to the table […] I’m far from perfect, but I try to get behind her and let her know I’m there for her and our daughter, no matter what.

Furthermore, he doesn’t see their relationship as a one-sided system. Revealing how he and Serena have extensive conversations about “her career goals and what she can do to reach them,” he also adds how “she does the same with [him].” The pair are always looking out for each other and their happiness; if neither is happy within the partnership, the other is willing to do whatever it takes to adjust and change course. “I know I’ve been successful in my career, but I’m not the one racking up the trophies,” he said. Both Alexis and Serena are well aware of “what it takes to be successful,” and they’re able to bring “mutual understanding, drive, and relentlessness to the table” to ensure their family doesn’t run into any major obstacles. Alexis is not the first or last man to favor fatherhood over professional glory, and it can feel problematic to underscore a man’s sacrifice when women have been doing the same since time immemorial, but progress is progress nonetheless. Any upward movement in the road to gender equality should be recognized; if we don’t address any change, how will we know what comes next?

Little compromises are part of a healthy relationship

It goes without saying that many men need to step up and “surprise and delight” like Alexis if they want to develop a true partnership with their women.  You can’t expect to get it right 100% of the time, but as long as your head is in the right place and you care about the other person, you’ll make it work. Of course, it’s not like women don’t also have to concede in many areas to strengthen the partnership. Sacrifices need to come from both sides, but when you’re in love and immersed in the idea of happiness, it doesn’t matter. It doesn’t feel like a compromise at all because it’s instinctive to you; it’s what you’re meant to be doing with your time because it’s what brings you the most fulfillment.

At the very least, if you don’t have time or space or mental capacity to make a compromise, effort does go a long way. Persistent, strategic, oftentimes creative effort is a potent weapon; it shows that people you are serious and ready to navigate any hurdle. As long as you’re showing willingness, half your battle is over.

“You cannot be lonely if you like the person you’re alone with.” ― Wayne W. Dyer

You Have The Power To Be A Point Of Light | Tyler Perry Inspirational Speech | Goalcast
Every Parent Needs To Know THIS One Simple Truth | Dr. Shefali | Inspiring Women of Goalcast
Jordan Peterson’s Ultimate Advice for Young People | JOURNEY TO SUCCESS
How to Persist, Be Patient and Succeed | Jordan Belfort | Goalcast
The Secret To A Life Worth Living | Powerful Motivational Speech by Tom Bilyeu