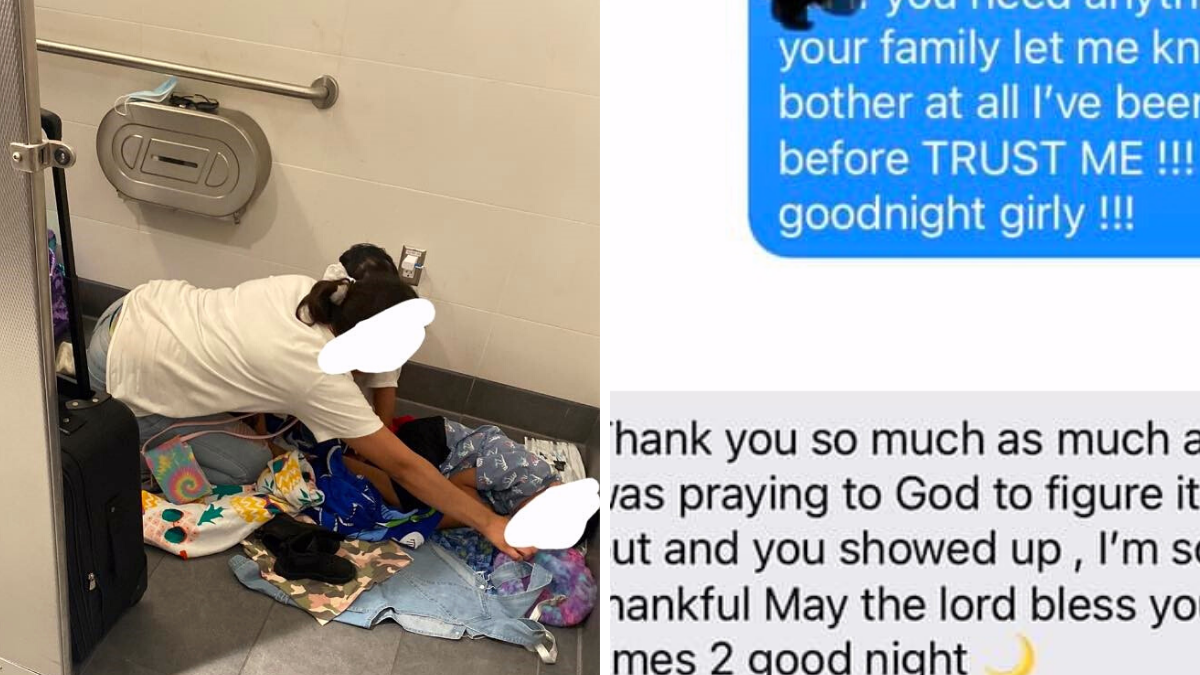 Missing a flight is never a great experience. So Cyn Symoné was understandably upset when she missed her first plane to Los Angeles and had to rebook a seat on another. But as it turns out, that little delay put her in exactly the right place at the right time.

By the time Symoné landed at LAX last April and made her way to baggage claim, she decided to check her makeup in the bathroom. There, she revealed afterwards in a Facebook post, she “heard a woman crying so hard.” Unsure what to do she left, but then she came back about four times.

“I was thinking should I say something like ‘it’s gonna be okay,” but I was nervous and she was speaking Spanish so I didn’t know if she’d even understand me,” Symoné wrote. “I left and came back to the bathroom like 4 times while I was waiting for my bags to come down (full flight) and I heard her say, ‘But the bus doesn’t come until tomorrow.’”

How many people came into the bathroom [and] heard her crying for hours?

That was all it took for Symoné to reach out and ask if the woman had any money or a way to get some. When the woman said no, the weary traveller decided to help and asked if she could pay for a hotel room. “She stopped crying and opened the stall door AND I SEEN THE SLEEPING KIDS !!!” Symoné added.

Stopping to help others in need

As soon as Symoné saw the kids, she was so glad that she had stopped and asked the woman if she was okay. “I felt so happy to help her.” she said.

Symoné then took photos of the mother and her kids to send to her ride and to explain why she wanted to help the family out. Later, she rode with the woman and her kids to a Marriott, where she got them a room.

“I wanted to share this because I kept thinking like HOW MANY PEOPLE CAME INTO THE BATHROOM [AND] HEARD HER CRYING FOR HOURS,” Symoné continued in her post, which has since gone viral. “[They] didn’t know there were kids and kept going… I’m glad I said something because she was super sweet and appreciative, and she had babies with her.”

Symoné left the woman at the hotel, but she also got her number and sent a follow-up message via text saying that if she or her family needed anything at all to please call her.

“Thank you so much. As much as I was praying to God to figure it out and you showed up, I’m so thankful,” the woman wrote back in a shared screenshot. “May the lord bless you times 2 good night.”

Symoné revealed the reason she shared photos of the family alongside her post was to encourage others to help those in their own time of need.

When I woke the next morning, I thought to myself, if people only knew the extent of the crying woman in the stall, would they have stopped? Unfortunately for most, seeing is believing. I hope everyone takes something from this.

Symoné’s initial reaction was to leave the woman alone because she didn’t want to intrude on what she originally believed was a private moment. Many people in that situation would probably feel the same way and do the same thing. However, Symoné didn’t want to just leave the woman without knowing for sure that things were okay, which is why she repeatedly returned to the bathroom.

It’s a reminder to follow your gut, but it’s also a reminder that many people don’t know how to ask for help in their time of need. Extending a hand and being there, even if they don’t take you up on it, could make a world of difference in that person’s life.

This story also makes us remember that sometimes life throws you an unexpected curveball, like a missed flight. But at the end of the day many things really do happen for a reason, so why not sit back and enjoy the ride?

“Helping others, without expecting anything in return is what true self-worth is all about.” – Gavin Bird

David and Goliath (Official Lyric Video) Fearless Motivation
You’re Making Decisions The Wrong Way – Here’s How to Do It Right
Ability to balance on one leg may be linked to a longer life: study
Amazon’s Alexa could soon mimic the voice of your dead loved ones
Discern Between Your Hunger and Appetite To Help Achieve Your Fitness Goals