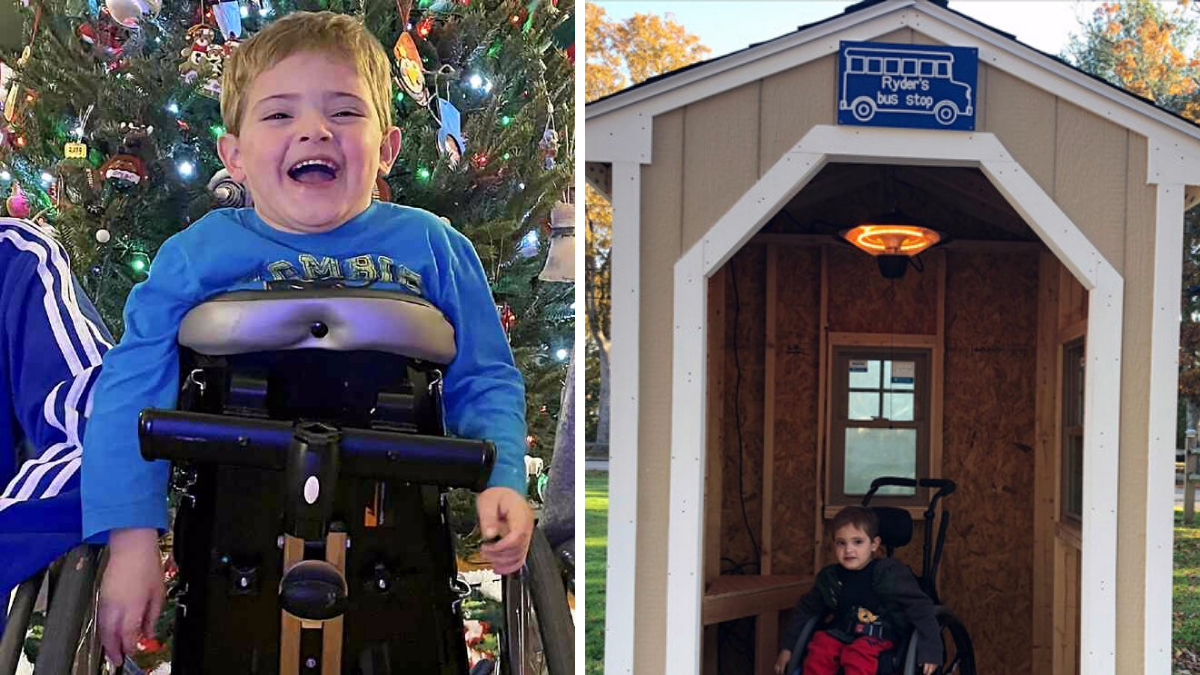 Five-year-old Ryder Killam rides the bus like other students in his class at Dunn’s Corners Elementary School in Rhode Island- but he can’t simply run out to catch it when it arrives.

“With Ryder being in a wheelchair, unfortunately it’s about 75 feet from our house to the bus,” said Ryder’s Dad, Tim Killam to WJAR. “He’s not the typical child that can run out when the bus comes.”

He needed a shelter to wait for the bus

Tim would go out with Ryder and shield him from the elements, but it didn’t work very well.

“We ended up having an old patio umbrella standing out here to keep him dry, but with the wind blowing and stuff it just didn’t work,” he said. “So we decided to reach out to the community, we actually put a post on Facebook looking for friends that maybe knew somebody that had one that they were no longer using.”

A class project with a purpose

Soon, a teacher at Westerly High School reached out and said he had the solution- a bus shelter built by students in his class.

“I think my first email was, absolutely we’re in,” said teacher Dan McKena to WJAR. “We’ve done other projects before. I think it’s very important for my students to learn not only the aspects of construction but of being involved in the community dealing with people outside of the school environment.”

The class got to work building a structure for Ryder with $300 of wood donated by Home Depot.

McKena said it wasn’t just a worthwhile use of the students’ class time; it was also a lesson in the power of helping others.

They all worked together for a common goal and they really enjoyed knowing the end result and knowing where it’s going. On days when it might’ve been like, ‘I don’t feel like working’ or whatever it may be, they just come in eager, ready to get going and get to work.

The students at Westerly managed to build the bus shelter before the snow came, and Ryder has been using it ever since.

“He loves it, he actually after school makes us stay out here and hang out now it’s his new fort so he gets home,” Tim told WJAR. “The community, they’re incredible, they’ve come forward a couple of times for Ryder. It’s unreal how everyone comes together to make things work for everybody.”

“The family sent me a photo of Ryder in the bus stop and his grin, his smile, I think my response to that email was just, ‘priceless,’” added McKena. “That one photo that the family sent me made it all worth it and I shared it with the students that were involved in the construction.”

The importance of community

Being in a wheelchair will undoubtedly bring plenty of challenges for Ryder in his life. But thanks to students in construction class at Westerly High School, the minutes spent waiting for the bus are that much easier.

This heartwarming story is a good reminder of the importance of helping others in our communities.

“There is no exercise better for the heart than reaching down and lifting people up.” –
John Holmes