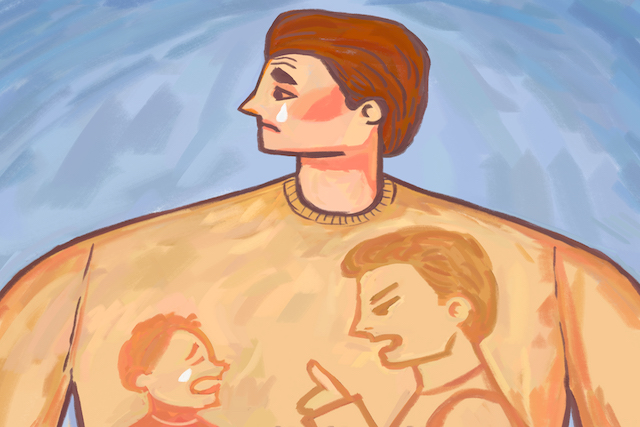 “The way we treat our children directly impacts what they believe about themselves.” ~Ariadne Brill

Growing up, I always felt odd. I often wondered what was wrong with me. I compared myself to my friends and always thought they had a better life than me. They had both parents still together, went on family vacations. It was not that I was jealous or bitter, it was just that they seemed to be ‘normal’ and happy. Whatever that means.

I never remember my parents being together. My parents divorced when I was two. I lived with my mother and older sister, who was eight years older than me.

My mother was a nurse, and we grew up in various nurses’ residences, as she did not have money to buy a house.

She was diagnosed with depression, and I remember nights and weekends with her being totally detached from us. She often seemed like a statue just sitting in the lounge chair or lying on her bed watching TV.

She was morbidly obese and ate to control her emotions. She never went out except to go to work and back home. When we did go out, she was anxious and always worried about everyone around her.

She was the kindest person I have ever known—she would give her last cent to help a needy person or animal. She was also the most intelligent person I have ever come across. She knew about everything. Her general knowledge was exceptional. But she never believed she was good enough and never had any self-confidence. She was insecure and self-conscious.

My father was an alcoholic womanizer. Unlike my mother, he needed to be out and about and to be seen. He appeared confident, had hordes of women falling at his feet, and he never seemed shy or insecure. He was the love of my life. I adored him and couldn’t wait for him to fetch me on a weekend to get away from my mother and sister. It was an escape for me.

Our clothes had to match perfectly. I can still remember her saying that no decent woman goes out without matching shoes and bag. She would say that only prostitutes wore makeup and ask why we would want to degrade ourselves in that way.

When we did well at school, she told us we needed to work harder and that we would never get anywhere in life if we didn’t. She told us that men were Satan’s children who only ever wanted sex from a woman and that they never loved anyone but themselves. A woman’s place was to just make a man happy while he went off to have affairs.

Starting when I was a young age, she would say, “You can never trust a man, Samantha. They are all the same.” When we got injured, she would be angry with us for showing emotion. She would say only weak people cried. She would never hug us or tell us she loved us.

My father, on the other hand, treated me like a princess. He detested my sister and excluded her from everything. I never understood this behavior until many years later. He had written her off as she had bipolar disorder, and he couldn’t deal with that.

Everything I did was perfect in his eyes. He took me everywhere with him when he fetched me. This would include going to his numerous girlfriends’ houses, bars, clubs. But I loved every minute with him and never felt unsafe. I remember begging him to let me stay with him to avoid going to my mother.

Unlike many people in this world who blame their parents for how they turn out, I have never done that.

I know my mother tried her best under the circumstances. She was brought up in a toxic environment herself, so she did not have any positive role models to base her experiences on.

My father grew up with alcoholic parents who beat the children almost daily. He never had positive role models either.

My sister committed suicide in 2007, as she was too wounded to carry on in this life.

I had never thought about how my childhood had affected my adult life until I left a toxic relationship in March this year and finally realized that perhaps it is true that the way I was treated as a child has directly impacted how I am in adulthood. How the choices I have made have been a direct result of my upbringing.

At forty-eight, I can confidently say the following about myself:

I trust no one, I am insecure, I have zero self-confidence and self-image. All my clothes are a size bigger to hide my body. The only time I ever wore makeup was the day I got married.

I push myself beyond my limits to achieve perfection in my work.

I am terrible at managing my finances.

My relationships have all been disastrous—I have just had toxic people all around me all my life.

The only good thing that has come out of my life are my two precious boys.

When I had my first son, I promised myself that I would not be my mother with him. I hugged him and told him constantly that I loved him. I told him he was good enough, clever enough, that he was doing his best. I did the same with my second son.

With my new understanding and mindfulness, I am trying daily to shift my thinking and telling myself that I too am good enough and that I too deserve love and kindness.

We can only try our best, and while it is not easy, we have a choice to break free of our childhoods and become the best version of ourselves. No matter how old we are.

We have a choice to recognize how our upbringing affected us, heal the wounds they gave us, and break the cycle so we can raise children who believe they’re worthy of love—and treat themselves with love.

Samantha Stewart is a nurse by profession. She loves animals and children and is happiest when she is surrounded by nature. She loves reading and spending time with her children. She has a huge interest in mental health issues. She has only recently started writing and finds it very therapeutic.

How to Persist, Be Patient and Succeed | Jordan Belfort | Goalcast
You Have The Power To Be A Point Of Light | Tyler Perry Inspirational Speech | Goalcast
Jordan Peterson’s Ultimate Advice for Young People | JOURNEY TO SUCCESS
Every Parent Needs To Know THIS One Simple Truth | Dr. Shefali | Inspiring Women of Goalcast
Morning Routine to Activate Your Brain | Jim Kwik | Goalcast