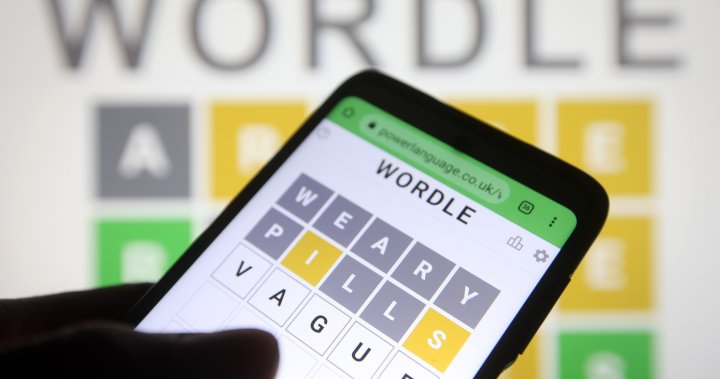 It’s becoming clear that Wordle is a little bit like a budding romantic relationship.

After some time passes, however, the shiny patina starts to wear off, revealing some not-so-cute traits. You have to decide whether it’s worth sticking around.

Wordle: Why so many people are obsessed with the new online game

It seems as though a lot of Wordle players are entering this latter stage, with the honeymoon phase coming to an end.

Some fans think the viral word game has gotten harder in recent weeks since The New York Times bought it from developer Josh Wardle in late January.

One Twitter user went so far as to claim the game has gone to “the dusty section of the dictionary” to find its latest words.

Is it just me, or ever since Wordle got bought by NYT, the words have gotten too complex? They were simple words before, now they’re going to the dusty section of the dictionary to find five-letter words pic.twitter.com/5EBIQj20Vb

The past few days of Wordle have had a different vibe. Seems like those choosing the words are actively seeking uncommon letter combinations in a way that wasn’t happening before. Not sure how I feel about it. 239 5/6

Am I getting dumber or is Wordle getting harder?

But, has it really gotten harder?

The short answer is: no, not really. The long answer — well, it’s a bit more complicated.

The New York Times claims they haven’t made the answers harder on purpose. In fact, Times communications director Jordan Cohen told The Guardian “nothing has changed about the game play.”

That said, the NYT did mess with the back end code a bit, removing some offensive and sexual language, as well as some obscure words like “AGORA” and “PUPAL,” reports The Verge.

But even the original game, before it was sold, did not include all of the English language’s five-letter words. Wordle’s creator Wardle previously said that he whittled down the list from about 12,000 words to approximately 2,500 — using only words that his partner, for whom he first developed the game, considered recognizable.

(Side note: Wednesday’s answer of “CAULK” was a head-scratcher for many, and the word briefly jumped to the top of Google’s trending topics while players searched for the word’s meaning.)

What’s also creating some confusion (and a bit of vitriol, if we’re being honest) is the fact that there are now two versions of the game available for play. If you’re playing Wordle on the new NYT platform, you will get one answer. If you are playing on the old platform, your answer will be different.

Todays word is one I have never used, and what’s more, it was different to the winning word on my wife’s version of Wordle. What’s happening? Are there two versions out there running in parallel?

Cohen told CNET that the newspaper is working on a slow migration to the new site and that there will be a period of time where both platforms are available before users are permanently directed to the NYT version.

“Our priority is making sure people can carry their stats and streaks from the original site, and this is a migration that is happening over time as people play,” he said.

On Wednesday, the NYT’s Wordplay Twitter account nudged users to refresh their page so they could be directed to the new version.

Was your Wordle answer (Wordle #241) AGORA yesterday? You could still be on the old Wordle site. Give your browser a refresh to be redirected to the NYT site and guess today’s word. pic.twitter.com/US82NuhJAV

Still, that hasn’t stopped people from poking fun at the NYT and the confusion that’s been created this week.

People that think the NYT made Wordle harder are weak

Regardless of what’s going on, Wordle remains a staple on our social media feeds and we likely won’t stop playing any time soon.

What You Need to Make Your Dreams Come True | Inspiring Speech by Tyler Perry | Goalcast
U.S. shares plan to drastically reduce nicotine levels in cigarettes
Why Stability Feels Unsettling When You Grew Up Around Chaos
Lizzo Was Almost Canceled Over an Offensive Slur – Her Surprising Response Changed Everything
The Hidden Source of Regret (And How To Overcome It)