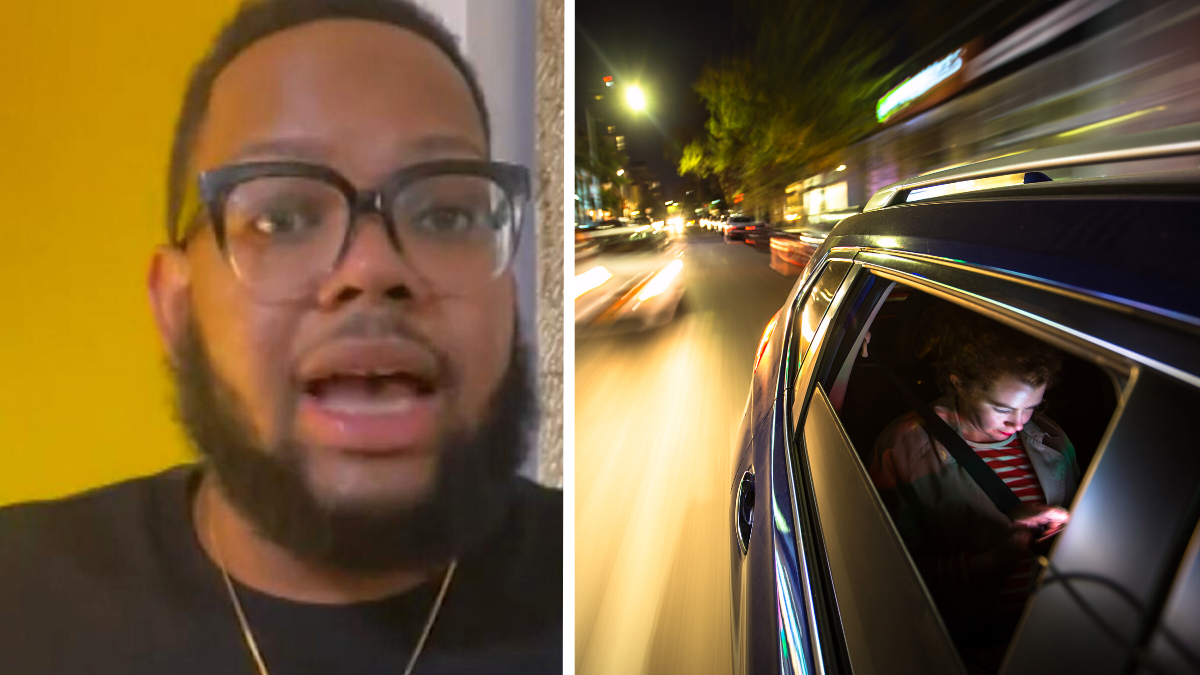 When 32-year-old part-time Uber driver DaVante Williams was driving his teenage passenger to her home in Virginia when vehicles on the I-95 ground to a halt, it proved to be far more than just rush hour traffic.

A severe winter storm earlier created a 50-mile long backup, leaving some motorists standed for over 24 hours in one of the worst traffic bottlenecks in the entire U.S.

“I noticed trucks and cars, there’s a ton of red lights ahead of me,” he said.

Worse than the road conditions, Williams noticed his passenger was in distress.

She’s telling me she’s okay, but I could hear her on the phone talking to family and friends and I can hear that she’s just exhausted, emotional, and just tired.

Williams consoled the teen, offering her drinks and snacks. However, things were getting dire. Williams had no blankets and was running low on gas due to keeping the heat running.

He did manage to turn around and head back to Washington, where he had originally picked up his passenger. However, faced with leaving her alone at Union Station, Williams had a dilemma.

“I wanted to make sure she was comfortable and didn’t want to leave her stranded,” he recalled.

As the passenger was calling her parents in a panic, he asked if he could speak with them with a bold offer: He’d get a hotel room for her- with his own money- so that she could rest and be safe.

In an interview, Williams said that he told the girl’s parents that he only had one intention.

I had to explain to her parents that hey, I’m not anyone crazy, I’m just trying to get your daughter somewhere safe.

After some hesitation, her parents agreed, knowing that it was the best idea.

With that, Williams put her up in a hotel at 8 that morning and even offered to take the passenger back home for free once the roads cleared. In the end, a family friend drove the girl home.

Shortly after parting ways, Williams got the text he was waiting for: His passenger got home safe- and grateful.

She thanked me for everything and her parents had also thanked me, for doing what I did for their daughter because I didn’t have to do it.

She wasn’t the only thankful one. In addition to reimbursing the hotel fees, Uber lauded his kindness in a tweet with the caption, “Not all heroes wear capes ❤️ thank you, Davante!”

In a surprise twist, the buzz created an unexpected opportunity. Williams was offered a part-time job as a lead driver at Alto, an upscale rideshare company. The position included training other drivers on customer service and maintaining their vehicles.

“We are thrilled,” said a spokeswoman. “DaVante is exactly the type of customer and safety-focused leader we are looking to help lead our DC presence.”

Williams is working out the details as he works full-time as a property manager and realtor.

It’s crazy how despite our plans, life can re-route us into chaos. It makes us realize there are very few things we actually have control over. Yet in those times, caring and compassion can conquer all. Williams and the passenger might have met as strangers, but in crisis, they had a common purpose.

With one Uber driver’s caring and one passenger’s trust, they made it through, and you can bet that neither will be the same. Wherever your next stop is, let it also be guided by kindness- you just never know what it might bring.

“True compassion means not only feeling another’s pain but also being moved to help relieve it.” -Daniel Goleman

Deaf Comedian Turns Tragedy Into Comedy | Kathy Buckley Inspirational Video | Goalcast
How to Live an Extraordinary Life, Starting Right Where You Are
Discern Between Your Hunger and Appetite To Help Achieve Your Fitness Goals
Why Stability Feels Unsettling When You Grew Up Around Chaos
Chris Pratt’s Tragic Divorce Taught Him One Crucial Thing before Marrying Katherine Schwarzenegger