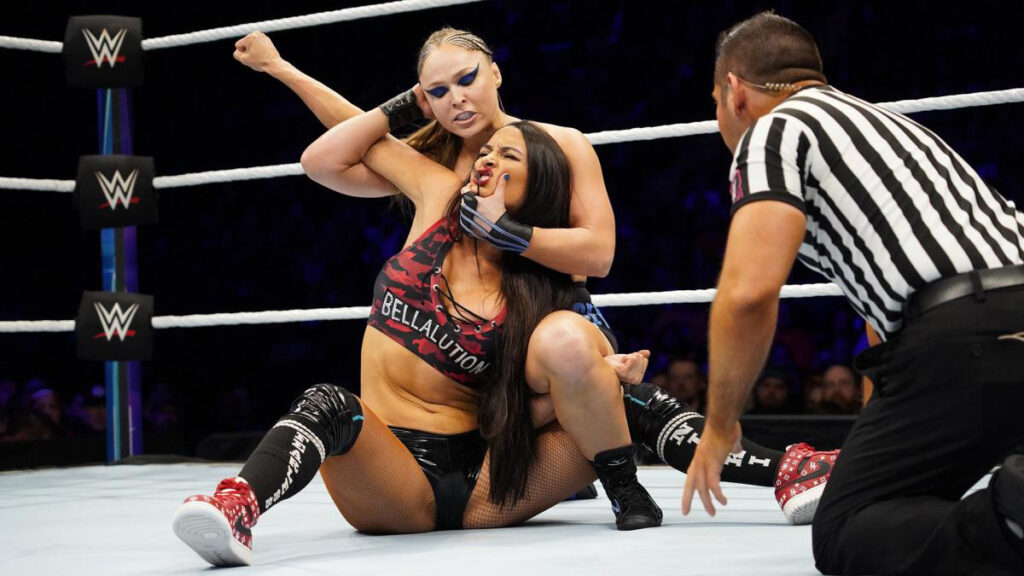 Nikki Bella is opening up about her biggest test yet.

As a WWE Hall of Famer, Nikki is no stranger to physically demanding challenges, both inside and outside of the ring. However, there is something so uniquely challenging about her latest undertaking that it surpasses the pressure of fighting fellow WWE superstar and former UFC champion, Ronda Rousey. Nikki’s perspective doesn’t only reveal what it’s like being a female athlete in a male-dominated sport, it also demonstrates how women usually have to go an extra mile to strike a balance between their personal and professional spheres.

Here’s what we can learn from Nikki Bella’s experience:

In an interview with E!, Nikki spoke out about some of her most impressive feats in a career spanning nearly 15 years. You would think that voluntarily getting in the ring with opponents like Ronda Rousey would be her most grueling moment, but as Nikki clarified, it wasn’t, though it did come close. “The most extreme thing I’ve ever done, I’d have to say for sure, getting in the ring with Ronda Rousey. Who would do that?” she said.

Additionally, fighting through prolonged injuries and sibling rivalries wasn’t a walk in the park either. “And I just think of some of my past matches, working through a broken neck, working through any injury, fighting my sister,” she said. As a WWE star, you have to quickly acclimate to the most intense scenarios, not just in terms of physical capability but how you have to maneuver the bizarre narratives contrived by both the press and the wrestling promotion. “Definitely everything extreme I’ve done has been inside that WWE ring,” she shared.

However, while exchanging blows with one of the most intimidating women in combat sports does constitute a career highlight, it wasn’t the only “extreme” event in her life. That honor is reserved for none other than giving birth. “Having a baby,” she revealed. “That, for all moms, is pretty extreme.”

The best part about being a mom is just the love. The love that Matteo gives me every day is just beyond unconditional. I have a bad day, he makes it come. I’m just so obsessed with my son and the love he gives me is so amazing.

For someone who’s worked so relentlessly to be a professional wrestler and has showcased time and again the extent of what her body can withstand, it’s heartwarming to see her get humbled by childbirth, a phenomenon that can feel, if not more daunting than brawling with other women for public entertainment, at least its equal. She is a beast in the ring, yielding to no one and competing with high-level performers in the industry, but when it comes to motherhood, Nikki is still on a learning curve.

As a result, she has had to change the status quo in her domestic affairs and prioritize her wellbeing. “Self-care to me is definitely mental and physical. I feel like mentally when I’m taken care of, my outsides just look amazing,” Bella told SheKnows. At the same time, Nikki adheres to a couple of hard and fast rules to guide this work-life balance. “[Matteo’s] first,” she said, referring to her son. “And if people around me don’t like that, are those people I want to be surrounded by?”

Furthermore, Nikki is also coming to terms with the concept of saying “no.” So far, she’s built her reputation as a bonafide hustler, someone who is ready to brawl and scrap her way into a victory, but with the arrival of her son Matteo with partner Artem Chigvintsev, she is getting acquainted with setting boundaries and refusing requests on the basis of her mental health.

People were very understanding when I was simplifying everything and not always being a part of the hustle — it was like my hustle kind of changed in a way that I knew I wanted to be the best mom ever.

As a reality television personality, she’s aware that she has to endure some nasty, demoralizing assumptions about her ability to be a good mother. For example, when people found out last year that she’d been away from her newborn for 24 hours due to a work trip, they leapt to judge her choice. “I was literally there for 24 hours,” she said, decrying the outrage that had surfaced in the media. “Artem and I have an incredible relationship and understanding of like, ‘Hey if we can do these things and someone can stay home, let’s do that because it’s better for our baby,’” she said in The Bellas Podcast.

Parenthood will perhaps be the most extreme, intense and powerful journey of your life, and most parents wouldn’t want to trade it for anything else in the world. If someone like Nikki Bella says giving birth was more strenuous than fighting the great Ronda Rousey, it’s time to acknowledge the physical, mental and emotional work required in being a parent.

Moreover, when you’re a woman, let alone a female wrestler, the obstacles in your way may seem all the more significant to overcome, and you might feel like you’re being judged for each and every move. It’s times like these when you have to set boundaries and gain confidence in your sense of self — if you can do so, the road becomes far easier.

Lizzo Was Almost Canceled Over an Offensive Slur – Her Surprising Response Changed Everything
5 Times Madonna Completely Destroyed Your Perception of Women Over 50
‘Tigger come back’: B.C. house cat chases black bear out of family’s yard
Dear Everyone Who Tells Me I Should Reconcile with My Parents
Canada has 3 of the world’s most liveable cities in 2022