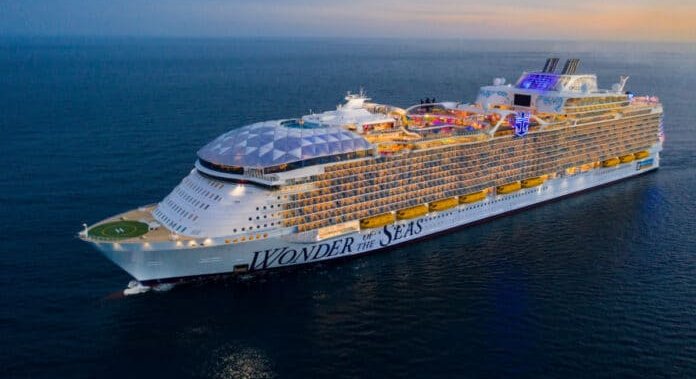 At long last, the world’s largest cruise ship is set to embark on its maiden voyage.

The Royal Caribbean’s Wonder of the Seas arrived in Fort Lauderdale, Florida, over the weekend and is gearing up to welcome passengers aboard its first sail to the Caribbean on Mar. 4.

At an astonishing 18-decks tall, the Wonder replaces sister ship Symphony of the Seas as the biggest ship of its kind, and also dwarfs the largest military ship in the world, the U.S. Nimitz-class aircraft carrier.

COVID-19: CDC says not to go on cruises, regardless of vaccination status

It’s been a long journey to get the Wonder ready for its big debut. According to Cruisehive.com, the Royal Caribbean Group first ordered the ship in 2016 with a sailing deadline of 2021. However, the COVID-19 pandemic threw a wrench in that plan, and delivery was delayed until this year.

The ship measures an incredible 1,188 feet, and has capacity for almost 7,000 guests and 2,300 crew. Guests have their pick of 2,867 staterooms over 16 guest decks, and can make their way through the vessel by using one of the boat’s 24 guest elevators.

The ship is divided into eight separate neighbourhoods, including a cantilevered pool bar named “The Vue” and a giant play area for kids. The “Central Park” neighbourhood features over 20,000 live plants.

The ship also boasts a water park with the “tallest slide at sea”, as well as a 10-deck-high zipline and a massive poolside movie theatre.

And if those perks aren’t enough, the “Suite Neighbourhood” offers private lounges and VIP pool areas for those guests who upgrade to a larger room.

The ship will begin offering five-to-seven night cruises from Florida to the Caribbean in March, and Western Mediterranean cruises from Barcelona and Rome will begin in May.

Worldwide, the cruise industry has been one of the hardest hit by delays and suspensions due to the pandemic. During times of loosened restrictions over the past two years, cruise ships have often been the sites of super-spreader events.

Barry Penner, legal advisor to Cruise Lines International Association in Canada, told Global News last week that he’s “optimistic” about the industry’s future, especially after the Canadian government announced that they would ease some testing and quarantine requirements for returning international travellers at the end of this month.

“We recognize Transport Canada has been working hard to get us to where we are now, and we’re a lot closer to having everything resolved than we were even a few weeks ago.”

Earlier this month, the U.S. Centres for Disease Control and Prevention downgraded their public guidance on cruise ship travel from “very high” level, which asks people to avoid cruise travel, to “high” level, which urges only fully vaccinated passengers to participate.

The Canadian government has not yet changed its guidance, which continues to recommend against cruise ship travel outside of the country.

Penner said he hopes that change comes soon, noting that double-vaccination and a negative test result are requirements for virtually everyone on board cruise ships, and robust health and safety plans are in place.

Podcast: The best caffeine vehicles
Why We Champion the 4 Day Week
U.S. shares plan to drastically reduce nicotine levels in cigarettes
Canada has 3 of the world’s most liveable cities in 2022
David and Goliath (Official Lyric Video) Fearless Motivation