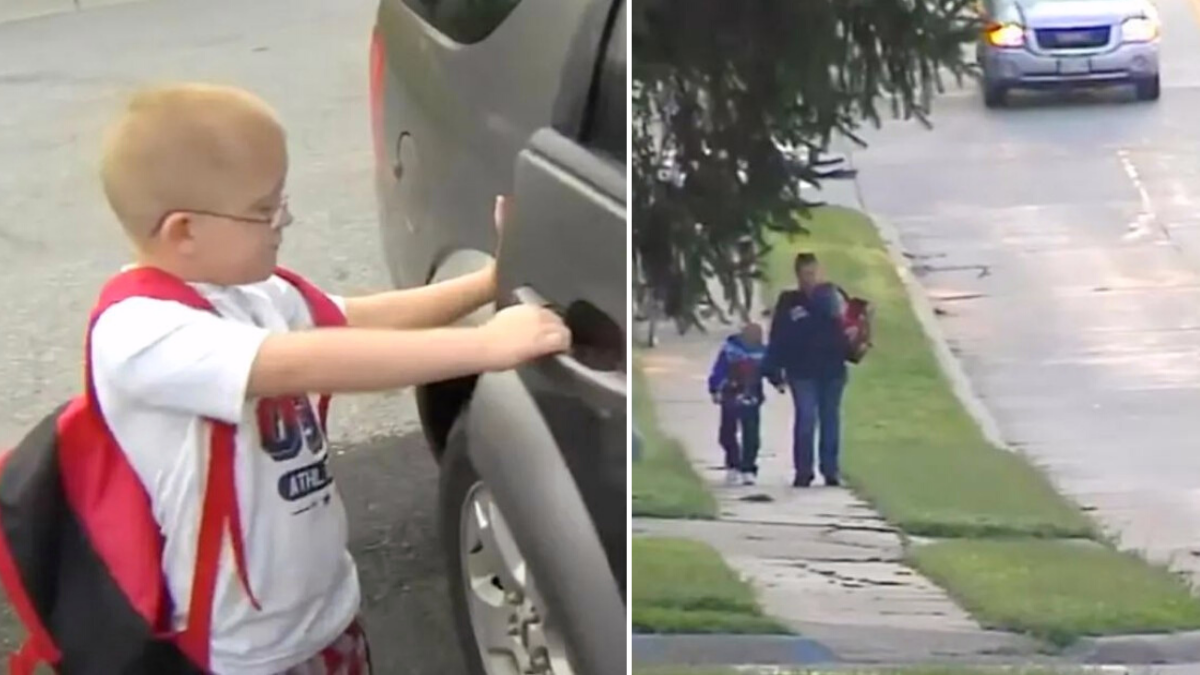 “It takes a village” might be one of our favourite family quotes, but this story is even more proof there’s truth to the saying. When Kim Bellus learned her son was ineligible to take the bus to school, it was a neighbour who stepped in with remarkable kindness to help them out.

We all remember those stories from our parents about how they had to walk miles to school- uphill both ways in the snow- when they were younger. But that exaggeration was actual reality for one resilient Nebraska mom and her young son in 2015, when they learned they weren’t eligible to take the bus.

Kim Bellus and her son, Gabe, lived two miles away from his school, Carriage Hill Elementary. Because of local school district regulations, that meant they were inside of the border that would allow the second-grader to hop on a bus. And, since Kim was a full-time student and stay-at-home mom who couldn’t afford a car, that meant she and her kid had to walk for hours every single day to get him to and from the building.

Worried about the upcoming winter months and concerned about how tired her kid was from the exhausting walk, Kim had a hard time staying motivated and wondered how long things could continue. Luckily, a local news outlet was interested in their story and their fortunes changed.

In an interview with KMTV, Bellus revealed she didn’t mind the walk so much in the nicer weather, but it was about to get cold. Plus her son was so tired by the time he got to school, it was hard for him to focus. “I’m really tired when I get back,” Gabe added in the interview.

“[Walking] is no problem at this point, but it’s going to be a problem once the winds, let’s say, are 30 below,” Kim further explained to the outlet.

After the report aired, a neighbour named Becky Novotny recognized Kim and Gabe. And so the next time she spotted them walking home after another long day, she pulled over and explained she too had a kid at the school and would like to help. She drove them home that day and made a deal with Kim to pick up Gabe and drive him home every single day. As a fellow stay-at-home mom to three, she understood the struggle.

If I was in the same situation, I’d think I’d want someone to help me. It’s a small town. You’re there for everybody.

After Novotny began giving Gabe rides, the boy’s mood shot up. The outlet reported he had better focus at school and seemed more energized not having to walk there and back every single day. With all of that time saved, he also joined the Boy Scouts, and secured a ride to those meetings too.

I had nowhere else to turn… I greatly appreciate [the] help.

This all happened because one mother saw another mother and her kid struggling and decided to help. How many people watched the pair walking for months and just kept driving? How many educators were concerned about the boy’s energy levels in class, but chose not to do anything because of regulation? This story is a reminder that sometimes it just takes one person to step in and offer to help for a young family’s entire world to change.

Rather than wait for someone else to be that change, we could probably all step in more to help those in our communities too. Offering rides to single moms or struggling parents isn’t just a time-saver, but it may allow them more opportunities in the long run. It isn’t just rides we can help with either. Cooking and dropping off a meal, picking up extra groceries, or even offering a tired mom a coffee can make a world of difference in her day.

Because again, it takes a village. And no one should have to go through this parenting journey alone.

It takes one person to make a difference.