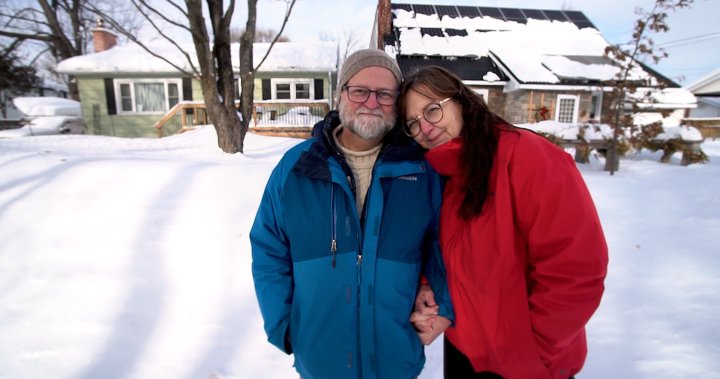 There is a growing phenomenon among Canadians in the way love is being lived. It has a lot to do with the need for couples of all ages to keep their independence but still remain in a loving committed relationship.

Louis St. Pierre and Kathie Brosemer are an example of the way relationships are shifting. When they started dating six years ago they weren’t looking for love.

“It developed very slowly. Actually, it was about three months, I think, before he gave me a real kiss,” Brosemer says with a laugh.

Years later they are happy and committed — even though they have different interests.

What makes their relationship unlike a lot of others is their living arrangement.

“I’ve been in my house for almost 35 years and I’ve got it just the way I love it. And when I met Louis six years ago, he was in a house about a mile away,” Brosemer says.

St. Pierre says they kind of had an “aha” moment when they realized they didn’t have to live together to be in a relationship.

“We can just keep on living like this apart, living apart together,” St. Pierre told Global News’ The New Reality.

It’s called living apart together or LAT. St. Pierre and Brosemer are so committed to their arrangement that St. Pierre recently bought the house next door to Brosemer in Sault Ste Marie, Ont.

A growing number of Canadians are finding partners and deciding not to live in the same space.

Do couples living apart hold the secret to everlasting love?

Brosemer loves the convenience of their setup. Whenever she needs some peace and quiet to work on her dissertation, her partner heads to his home.

“He can go home for a couple of hours and then come back and give me a good night kiss,” Brosemer told Global News’ The New Reality.

The number of couples choosing a LAT lifestyle is growing. Between 2006 and 2017, the percentage of couples claiming to be living apart together rose to nine per cent from six per cent, according to Statistics Canada.

There’s even a Canadian-led Facebook group devoted to this style of relationships called “Apartners.” It was created by Montrealer Sharon Hyman who is also in the process of doing a documentary about the subject.

“The documentary is called, Apartners: Living Happily Ever Apart and is about people who are in lifetime, committed relationships. They just do it from separate addresses,” Hyman says.

“It is autobiographical, since I have been an apartner myself for 23 years, and will feature other apartners from all walks of life and every corner of the globe,” she adds.

She hopes the documentary will show there are options for relationships. “There is no cookie-cutter, one-size-fits-all way to love. So many people have told me, had I known this option existed, maybe I would not be divorced now,” Hyman says.

Modern families: Living apart but together

She started the Facebook page in 2015 because of her film and now it has almost 5,000 members from around the world.

At Stockholm University in Sweden, Livia Olah, an associate professor of family demography, studies what kind of people are drawn to living apart together relationships.

“It seems that it’s appealing, especially to women and particularly for single mothers,” Olah says.

She says it allows for more equity in roles and breaks down stereotypes.

“We do not have to follow the usual traditional gender roles: women doing what they used to do, household work and other caring activities. So therefore this is appreciated by quite many,” Olah says.

The largest group of Canadian couples living apart are 25- to 34-year-olds, according to Stats Canada.

Heather MacDonald, who lives in North Vancouver, met her partner when she was in her late 30s. They have been together now for more than three years.

“You just make a point of every time you’re together being special because you don’t have a lot of it,” McDonald told The New Reality.

She’s the mother of a 14-year-old son and her partner has sons living at home as well. She wants to be there for her stepkids without feeling like she has to parent them.

“So by not living together, you avoid the conflict of the day-to-day parenting, and you can just enjoy the company of your stepkids.”

But living apart together is not without some downsides.

It’s one of the reasons why the research people like Livia do is important. It gives policymakers a better understanding of what modern-day relationships look like and how to adapt.

State of the Union: How alternative relationships are reshaping love in Canada

Natasha Sharma, a relationship expert and CEO of NKS Therapy, says some people might question the commitment of couples in this type of relationship. Yet she recommends that we step back from this indoctrination of how we think things should look.

“We’ve been raised and shaped in this archetype that says this is wrong, this is not normal, this is dangerous to the relationship,” Sharma says.

“But I think what we’re seeing is that the reality of humans and how we are, for the most part, may not fit that model, at least not 100 per cent of the time.”

The pandemic and lockdowns have shown us that too much together time isn’t always best for a relationship, so we should be open to other approaches to love, she adds.

St. Pierre is quick to point out that you can’t really judge the commitment in a relationship on the basis of whether two people live together or not.