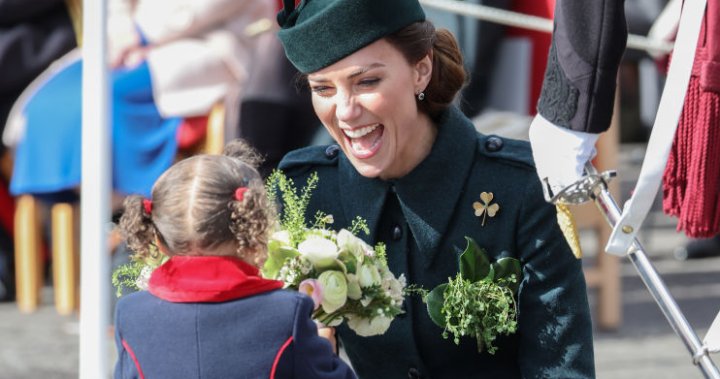 It’s no secret the Duchess of Cambridge loves children — she has three of her own, and early childhood education is a cause she’s championed in her role as a royal.

So, it was not surprising to see the special attention Kate Middleton paid to toddlers and kids at the annual 1st Battalion Irish Guards’ St. Patrick’s Day Parade in Aldershot, England yesterday, as she and Prince William showed up to lend their support after missing the event the last two years due to the pandemic.

Usually Middleton steals the show at these events with her regal fashion and bright smile, but this year Middleton couldn’t hold a candle to the adorable daughter of one of the Irish guards.

Gaia Money, a 20-month-old little girl, was chosen to deliver flowers to Middleton. Dressed in a navy blue, A-line coat with red trimmings and matching red tights, Gaia couldn’t have been sweeter in her shy interactions with the Queen-to-be.

After carrying out her official duty of handing a bouquet of flowers to Middleton, Gaia quickly ran to hide behind her mom. Soon after, she mustered up the courage to ask for the flowers back.

Middleton can be seen obliging the toddler with a big laugh.

But the heartiest laughs came later in the celebration when Gaia’s dad, Lt. Col. Rob Money, took his large, bearskin hat and slipped it down over his daughter’s head.

The ornamental cap almost swallows the toddler whole and the Duke and Duchess appear positively amused.

Photographer Chris Jackson shared the photo on Instagram, expressing his delight with the photo.

“Absolutely loved this today at the St Patrick’s Day parade with The Irish Guards in Aldershot. Lovely moment for The Duke and Duchess of Cambridge as Lieutenant Colonel Rob Money puts a bearskin hat on his 20-month-old daughter Gaia Money 🇮🇪 ☘️,” he shared.

Middleton was clearly in her element at the parade, visiting with members of the crowd, and even giving a few scratches to the regiment’s Irish Wolfhound.

The Cambridges have had a very busy month. Last week they met with volunteers at the Ukrainian Cultural Centre in London, and this week attended a Commonwealth Day Service at Westminster Abbey.

Next, they’ll be heading off on a special royal tour to mark the Queen’s Platinum Jubilee. On their tour they will travel to Belize, Jamaica and the Bahamas.

David and Goliath (Official Lyric Video) Fearless Motivation
Chris Pratt’s Tragic Divorce Taught Him One Crucial Thing before Marrying Katherine Schwarzenegger
The Hidden Source of Regret (And How To Overcome It)
Ability to balance on one leg may be linked to a longer life: study
Discern Between Your Hunger and Appetite To Help Achieve Your Fitness Goals