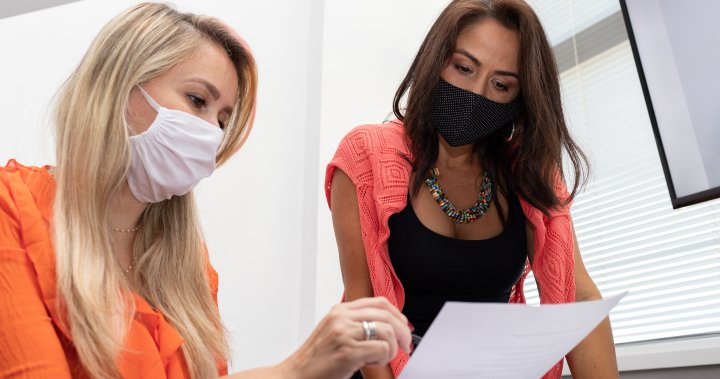 Ever since Alva Bourque entered the workforce in 2011, she always made sure to dress up, choosing to wear a pencil skirt with a blazer or a long-sleeved top with a necktie, and of course heels, for work.

Even during her pregnancies, Bourque who lives in Halifax, N.S., and works at a non-profit organization, dressed the same way, but the COVID-19 pandemic changed the way she presents herself professionally.

“I still look presentable, but maybe the pandemic has made me care for more important things rather than my power dressing,” said Bourque. “I don’t need to be in blazer and heels right now … I’m just too exhausted coming from this pandemic. Super exhausted.”

As a mother of two kids — aged three and seven — Bourque says it has been exhausting to work from home while simultaneously caring for her children.

Even now, as she returns to the office four times a week, she says she’s been choosing to dress more comfortably in jeans or lower-heeled boots.

Suiting up: Workwear business making a comeback in a work-from-home world

With the easing of public health restrictions, more and more Canadians are going back to the office, but what they choose to wear to work is going to change drastically, one expert says.

A graduate program director for fashion at Ryerson University, Henry Navarro Delgado says that the COVID-19 pandemic has had a huge impact on the way people dress and present themselves. Delgado says office wear has changed a lot and will change more going forward.

“Trends die and sometimes pick up again. We saw something similar in the 1990s where there were a lot more relaxed dress codes at work because of the culture from Silicon Valley,” said Delgado.

Then in the late 2010s, there was a return to suits and ties for the office.

“They became again like the hallmark of being well-dressed. But right before the pandemic hit that trend was going in decline a little bit. And then with the pandemic, I think it just put the last nail in the coffin for that,” Delgado said.

Delgado also explained that there has been a shift towards relaxed dress codes lately. Even when people are required to dress formally these days, we see a change in that type of dressing, he said.

“I have seen the inclusion of elastic materials, even for suits. So there’s that added element. There is also definitely a lot of influence from sportswear and activewear in evening formal wear right now,” Delgado said.

“Now we have what is called the jogger waistline, which is flat in the front, and it has an elastic in the back … it has this kind of formal look, but is more functional,” he added.

Even the color schemes have changed, according to Delgado. In pre-COVID times, formal wear was dominated by greys and charcoals, but now there is a lot of blues and earth tones.

READ MORE: Canadians favour hybrid work amid COVID-19. Can employers force them back?

“When you see all of that, then clearly formal wear is crossing the line into activewear,” he said.

In terms of what people think of fashion, Delgado explained that people tend to think only of clothing in particular, but another shift is happening around dress and personal appearance overall, like hairstyles.

“Some states in the U.S. have passed legislation related to Black hair, so I think there is going to be more acceptance of things like that … things that from a mainstream perspective might not be considered fashion itself, but actually are part of the appearance,” said Delgado.

“You’ll start seeing more acceptance of the hijab, for example, and all the different hairstyles,” he said, thanks to the shift of style taking place because of COVID-19.

He explained that working from home due to the pandemic has given employees the upper hand, meaning that they have more say in terms of their working conditions.

“Employers are a lot more flexible out of necessity to accommodate … including when it comes to dress codes,” Delgado said.

Ever since provinces started easing restrictions, several Canadian banks, including Bank of Canada and other institutions have called their employees back to work.

“Our informal policy is ‘dress for your day.’ For example, staff may dress more casually if their day consists mainly of team meetings or heads-down work, but more formal attire may be expected if they’re giving a presentation, hosting external visitors from or meeting clients/stakeholders on business travel,” the bank’s spokesperson Alex Paterson.

He said this approach was in place pre-pandemic and will not be changed.

1:36
Back to work after 2 years at home? Your dog’s mental health could suffer, says Winnipeg trainer

Back to work after 2 years at home? Your dog’s mental health could suffer, says Winnipeg trainer

Regardless, Delgado said, “companies will have no choice” but to relax their dress code since the landscape of work has shifted and become more virtual and remote.

“The landscape has shifted, so crucially, so fundamentally that they have no choice but to adapt,” said Delgado.

“I’m still within the dress code policy. It’s just that I’m not within my own standard of how I want to go,” she said. “But my clothes aren’t going anywhere … I’m just taking a break.”