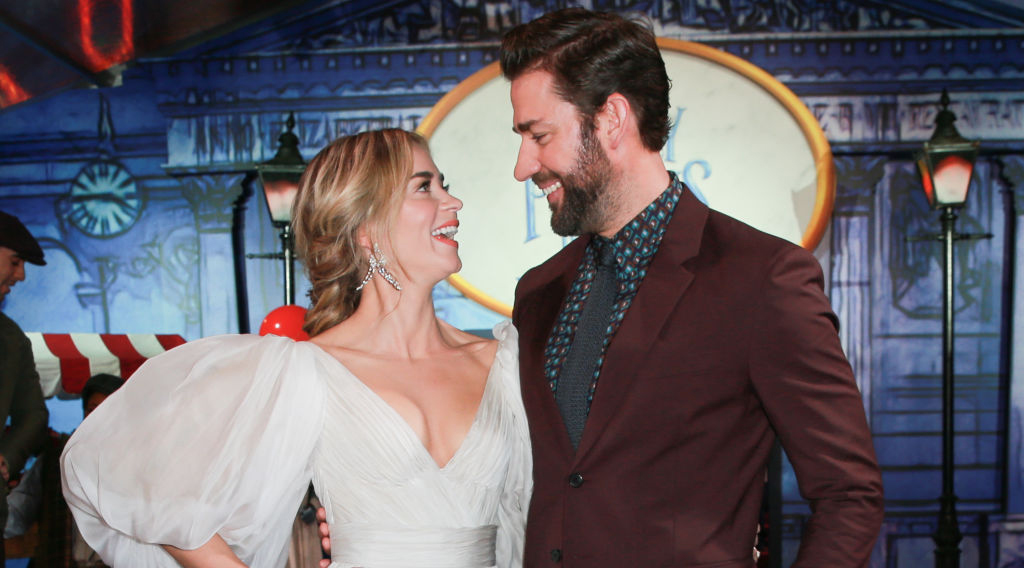 Relationships are never easy, especially for Hollywood couples. It’s hard to keep those feelings alive when the partners sometimes work from different continents, often for long periods of time. It’s even harder when temptation is all around. However, Emily Blunt and John Krasinski are hopeful exceptions that restore our faith in healthy and beautiful relationships.

When it comes to relationship goals, these two have set the bar pretty high. The couple has been happily married since 2010 and have two beautiful daughters, Hazel and Violet. On top of everything, you can still see that spark in their eyes whenever they talk about each other, and if that’s not heartwarming, we don’t know what is!

So what is their secret? Do they know something that we don’t?

Krasinski was already head over heels in love before he had the chance to meet Emily in person. He revealed in several interviews that he was a fan and had a huge crush on her. His crush was so big that he admits he hit “full stalker status” with Blunt, as he watched The Devil Wears Prada 75 times (give or take).

I’ve always been the biggest fans of hers, but not until you’re in the room when she does what she does do you know why she’s so phenomenal. She is the most unbelievably talented person, powerful person, kindest person. She makes everyone around her better.

They finally met in person at a restaurant and they both say it was love at first sight. But that was not a date, they just happened to be in the same place and a mutual friend introduced them. After that, John simply wouldn’t leave the table. He just stood there and made Emily laugh. Cute, huh?

For their first date, however, they chose something rather unusual for a Hollywood couple. While others would have an extravagant, fancy dinner — you know, something to impress each other and the audience — these two chose to meet at John’s apartment and order a pizza. That was it! No planes, no exotic destinations, just two people feeling comfortable around each other from the very first date (and for many years to come).

Couples Who Have Fun Together, Stay Together

Whether conducting an interview or posing on the red carpet, Emily Blunt and John Krasinski are constantly making each other laugh. While most celebrity couples choose to be more formal, especially on the red carpet, Emily and John have no problem in showing their real selves. They are individually very funny people, they are best friends, and neither are afraid to show it, no matter how corny it may seem to others.

They also play pranks on their friends together. If you’re a fan, you probably know about their long-standing prank war with their neighbor, Jimmy Kimmel, every year at Christmas. That’s something worth watching, if you haven’t already.

And since they both have such a great sense of humor, they decided they needed a couple nickname. They had us all laughing in tears when they unveiled it.

Hi, I’m Emily Blunt and this is my husband, John Krasinski. But it’s cool if you only know us by our celebrity couple name, Krunt.

Krasinski and Blunt Collaborate on and off-Screen

Before becoming this strong, cute couple, Emily and John have spent years independently building their successful movie careers. She starred in a bunch of great movies while John is best-known for his iconic role as Jim Halpert on The Office.

In 2018, they appeared together in the post-apocalyptic thriller A Quiet Place (parts one and two), and the fans loved it. The movie had great reviews from viewers, received an Oscar nomination and a solid number of other awards.

Now, we wanted to share the film’s success because it was directed by Krasinski. While he didn’t think he was ready to be a director, his wife encouraged him to go for it. She knew that her husband was good enough for the job, just as he knew Emily would be a great co-star for him.

Mixing business with pleasure can definitely be risky, but it was not the case for these two. They teamed up and became a strong example of what supporting each other in a couple means, and how far it can get you.

Krasinski and His Wife Understand Each Other and Make It Work

Having fun and collaborating for different projects can obviously make a relationship last, but these were not the only two ingredients for Emily and John. A strong relationship often means understanding each other on a deeper level and it sometimes requires sacrifices.

Not all of us are so lucky to find someone that knows and understands us inside and out. In an interview with Playboy in 2018, John said that Emily gets him like no other. There’s no need for further explanations when he’s having a bad day. She simply there for him and helps him deal with daily stressors and fears.

Things may look easy from the outside, but the couple often has to put on an effort to stick together as a family. For example, while John was shooting for Jack Ryan, he flew from Canada to London every single weekend to spend time with his loved ones.

But regardless of how hard those times must’ve been for them, they came out stronger. John is Emily’s biggest fan and after all this time he is…

He is my perfect man. He’s funny and warm and bright and confident. He’s a very emboldening person.

Ever since Disney talked about a new Fantastic Four movie, many Marvel and MCU fans have been infatuated with the idea of Blunt and Krasinski taking on the roles of Mr. Fantastic and the Invisible Woman. During the long wait, nothing much seems to have changed as fans would love to see a real-life power couple portraying Reed Richards and Sue Storm, but rumors continue to swirl that the fan casting could become a reality.

While not many details surrounding the movie have been confirmed yet, we’d definitely love to see these fantastic two in the Fantastic Four because they effervesce the same lasting relationships that have made Reed and Sue arguably one of the most unshakable family units in all of pop culture!

Why Are Emily Blunt and John Krasinski #RelationshipGoals?

Emily Blunt and John Krasinski are proof that any couple can stand the test of time — the partners just have to be dedicated enough.

Building such a strong and beautiful relationship takes time and patience. Remember to laugh together and celebrate each other’s successes, as they do. Your love won’t fade away if you don’t let it.

How to Persist, Be Patient and Succeed | Jordan Belfort | Goalcast
Every Parent Needs To Know THIS One Simple Truth | Dr. Shefali | Inspiring Women of Goalcast
Jordan Peterson’s Ultimate Advice for Young People | JOURNEY TO SUCCESS
The Secret To A Life Worth Living | Powerful Motivational Speech by Tom Bilyeu
You Have The Power To Be A Point Of Light | Tyler Perry Inspirational Speech | Goalcast