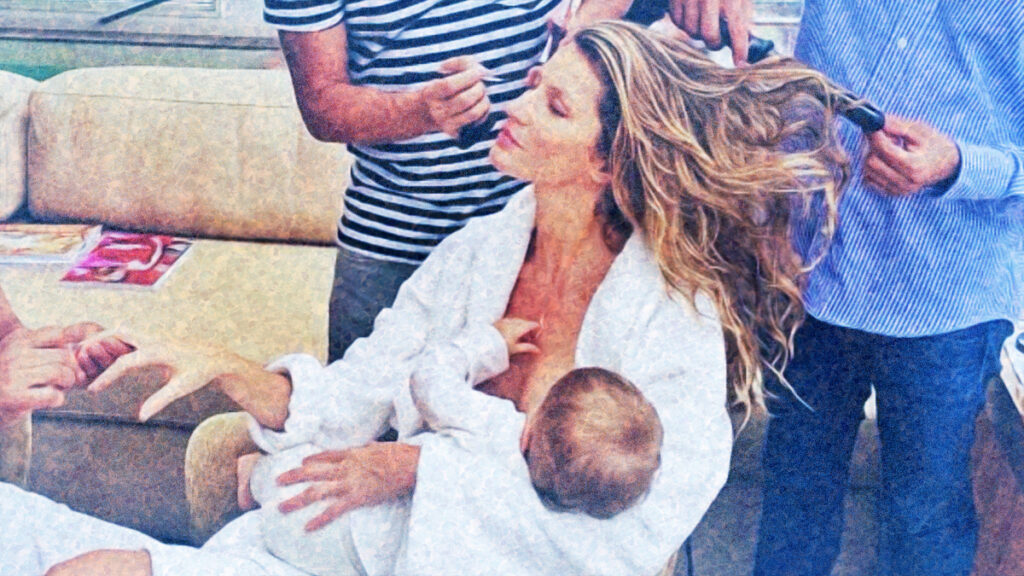 RELATED: Jada Pinkett-Smith Opens Up About Her Experience With Mom-Shaming

While no one should ever be judged for choosing to breastfeed over choosing not to breastfeed (everyone has their reasons), many who do breastfeed — celebrities among them — have taken to posting photos on social media as a way of exercising their freedom of choice and expression, thereby facilitating that same choice for the rest of us as well.

But first, why has such a natural, seemingly apolitical act of human sustenance known such controversy?

Why Is Breastfeeding So Controversial?

Many new moms post breastfeeding pics to social media because they want to share the most beautiful moments in their lives with their communities. Breastfeeding photos have also become a way of demonstrating breastfeeding positivity in response to those who take offense to women breastfeeding in public places, revealing a prudish culture that valorizes motherhood while wanting to cover up its realities both at once.

Mothers face enough challenges without having to worry about shutting themselves up in a bathroom stall every time their baby is hungry, so posting photos online is one way of celebrating the freedom to breastfeed openly, as needed.

RELATED: Cameron Diaz Reveals The Powerful Truth About Having A Child In Her 40s

Organizers of an online petition called “Hey Facebook, breastfeeding is not obscene!” said some women had been warned not to repost photos that had been removed from their pages or they would risk being kicked off the site.

“I find it offensive that (Facebook) can remove my photo but not the close up picture of a thonged backside I (have) seen on a friend’s page…” one mother wrote.

In a statement, Facebook spokesman Barry Schnitt said, “Photos containing a fully exposed breast (as defined by showing the nipple or areola) do violate those terms (on obscene, pornographic or sexually explicit material) and may be removed. The photos we act upon are almost exclusively brought to our attention by other users who complain.”

Fast forward to 2015, and Facebook finally bowed to the pressure, “clarifying [its] definitions of nudity,” by specifying that it would “restrict some images of female breasts if they include the nipple, but we always allow photos of women actively engaged in breastfeeding…”

Why Celeb Breastfeeding Photos Are Important

Many celebrity mothers have been vocal about their breastfeeding journeys over the years, and while they are no more important than that of any other mother, many have massive followings and are therefore able to make a larger impact on society at large.

In other words, not only are celebrities who breastfeed more likely to reach more people and incur widespread approval, but in doing so, they’re also more likely to change the way a large swath of people think. That’s powerful, and celebs who use their power for good in this way are making an important difference out there IRL.

From joyous celebrations of breastfeeding, to educational, “keeping it real” posts about the health challenges associated with breastfeeding, to struggles with self-judgement in the face of pressures to breastfeed, celebs have been vocal about it all. And it all goes a long way toward normalizing freedom of choice for moms everywhere.

Which Celebrities Are Helping to Normalize Breastfeeding?

In February 2022 after opening up about her struggles with breastfeeding, actress Olivia Munn took to Instagram to inform her followers that, “Breast-feeding is good and so is formula. To the mamas out there — do whatever you need to feed your baby and don’t let anyone make you feel bad about it.”

Munn’s post gets at how important it is to be careful about slinging judgements about what may or may not constitute “better parenting.” After all, as soon as anyone tries telling anyone else what they should or shouldn’t be doing with their bodies, we’re right back where we started.

RELATED: 20 Quotes About Mothers That Are Beautiful and Heartwarming

The Bachelor’s Lauren Burnham welcomed a daughter in 2019, followed by twins in 2021. She has made a point of busting the myth that breastfeeding is easy, calling breastfeeding twins “one of the hardest things” she’s ever done after being hospitalized with mastitis, a type of breast tissue inflammation that can lead to infection.

“No one told me that if you’re a first-time mom, sometimes your milk doesn’t come in right away. I had to supplement her with formula, and I was really upset about that,” she said. “I didn’t give up on it, and I went to a lactation specialist when I was dealing with painful engorgement issues. She helped teach my baby how to latch properly and after that, everything’s been great.”

Loose Women’s Stacey Solomon has likewise shared her difficult experiences with her followers on Instagram, posting that her nipples were like “one giant blister” due to breastfeeding. In a separate post, she opened up more about the difficulties she’d experienced.

“I’m struggling again with feeding this time around, so spending all of my energy trying to feed, eat and rest. Also seeing local breastfeeding specialists and the community midwives who have been incredible, so hoping for a more positive journey in the end this time but not putting pressure on myself. Even though it makes me a bit sad. Whatever will be will be.”

Back in August, singer Halsey posted a photo for World Breastfeeding Week, showing them breastfeeding their first child. Throughout their pregnancy, Halsey shared updates on physical changes they experienced while connecting with fans over “the joys and horrors” they experienced while pregnant, all geared toward smashing oppressive taboos and stigmas placed on parents. In particular, Halsey has spoken out about wanting to remain in touch with their sexuality, even while becoming a parent.

RELATED: How Fergie Redefines Motherhood by Challenging All Expectations For Older Women

“The idea that me as a sexual being and my body as a vessel and gift to my child are two concepts that can co-exist peacefully and powerfully,” they said when showing off their new album cover, an explicit attempt to unpack the Madonna-whore complex.

Before giving birth, rapper Cardi B wasn’t sold on breastfeeding, sharing that she was apprehensive about it because her breasts are “overly sensitive” and she couldn’t imagine a little baby “milking” them. But just months after she gave birth to her daughter in 2018, she released the highly-anticipated video for her hit single, “Money.” And while the video portrays plenty of the usual nudity, it also includes a major acknowledgment to her life as a new mom: in multiple shots throughout the video, Cardi is seen breastfeeding — while looking fly as ever.

Bottom line: breastfeeding should be seen as the perfectly normal and natural (and challenging) act that it is, and if celebrities can harness their superpowers to help normalize all of that and more, then the world is better off for it!