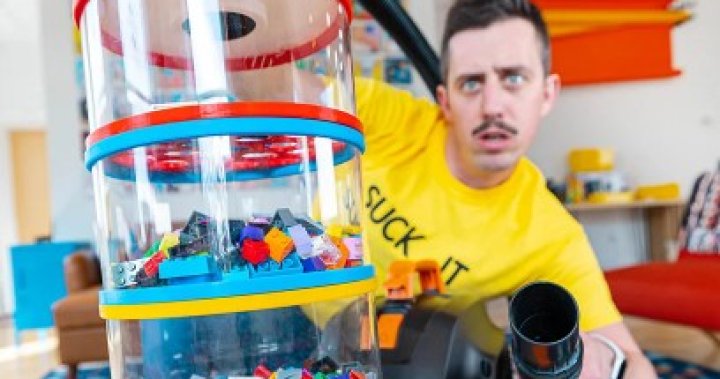 A genius inventor has come up with a brilliant foot-saver, designed to deal with the most menacing of toys – the dreaded Lego.

If Benedetto’s invention sounds slightly familiar, you’re correct. He says he was directly inspired to create the vacuum after watching an episode of The Office, where disgraced corporate CEO David Wallace (Andy Buckley) invents a toy vacuum called the “Suck It.”

Turning Wallace’s idea into reality meant Benedetto modified a Shop-Vac to include a canister attachment for the building bricks.

He used a 3D printer to create his design, and the best part is the canister sorts the bricks into seperate chambers by size.

The chambers are held together with magnets, which makes everything a breeze to dismantle and reassemble.

“The high suction vacuum will ensure that every brick gets sucked up from your floors and swiftly deposited into the clear tube as each Lego piece cascades down and gets sorted into their different sizes. So when things get messy, just suck it,” he explains in a YouTube video.

Benedetto has made a name for himself online by “solving problems that don’t really exist by creating products that no-one is asking for.”

He’s tried to curb Lego-inflicted injury before with his invention of “Lego Socks” – essentially socks equipped with a Lego base footpad that are designed to spare your tender tootsies from unseen pieces of brick hiding in the carpet.

It’s unclear what the future will hold for the “Lego Suck It,” as Benedetto has dubbed it. Will the U.S. Army buy the patent for his invention for $20 million, like they did with Wallace’s “Suck It” on the show?

Will parents eventually be able to print their own canisters?

Only time will tell.