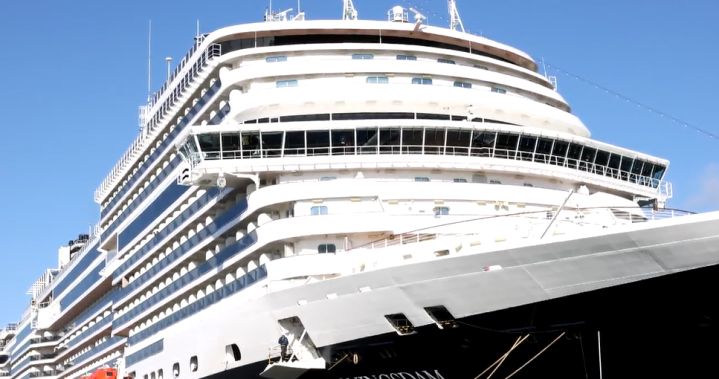 The first cruise ship to arrive in Canada since the start of the COVID-19 pandemic berthed in Victoria, B.C., on Saturday.

Carrying about 1,200 passengers — less than half its capacity — Holland America’s Koningsdam arrived in the provincial capital, marking the return of one of British Columbia’s major tourism drivers.

The return of the cruise industry comes as some experts warn of a sixth wave of the pandemic amid rising hospitalizations and the spread of the new Omicron BA.2 subvariant.

Canada’s new cruise rules require all passengers to be vaccinated and tested, and cruisers Global News spoke with Saturday said they felt those rules, along with the cruise line’s own precautions, were adequate.

“It was extremely safe. All the preparations that went on constantly on the ship for cleanliness, safety, everything. Wearing masks, there were hand sanitizers at every corner. I did not worry,” said passenger Brenda Gundersen.

Gundersen and Dale Short, both of Edmonton, said they’d booked the trip last fall and had wondered at points if the voyage would even go ahead.

“COVID hasn’t stood still — it’s a concern, it’s a less of concern — so we had our ups and downs wondering,” Short said.

“Some of the insurance things that they offered, refunds and so on, gave you a bit of comfort that should something happen, you’re not necessarily left high and dry.”

Sandy Boeshart from Kansas City, Mo., said the cruise was the first trip she’d taken since 2019.

“I have children that disagree with me and they think I’m crazy for doing this, but I do. I don’t know if I would feel the same if they were full.”

He said the company was confident those measures were enough to ensure safe voyages.

“It’s not zero risk, but nothing in life is right now. But we’ve taken all the precautions, working together with local officials and federal officials to make sure we’re confident.”

Saturday’s arrival was also hailed by business and government leaders, who described the occasion as a much-needed kick-start to the province’s beleaguered tourism economy.

“It is truly a great thing to see all of that robust activity happening here again, seeing the Koningsdam berthed here is a fantastic sign that we’ve been waiting for a long time,” Transportation Minister Rob Fleming said at a media event to mark the occasion.

“Normal isn’t quite a word we can use yet,” added Victoria Chamber of Commerce president Bruce Williams.

“But by seeing things recovering in the sense that we can now gather like we are, and see things coming back like this ship, means we are indeed on the way to recovery, and getting ourselves back to the way were were before, so it’s a great feeling of pride.”

The Koningsdam is the first cruise ship to dock in the city in 905 days.

The Victoria Cruise Industry Alliance estimates cruises inject about $130 million per year into the city’s economy. Province-wide, it estimates the industry is worth nearly $1.8 billion to the economy.

The Greater Victoria Harbour Authority is expecting to see more than 350 ships call this season, carrying about 780,000 passengers, up from the 709,000 who came through in 2019.

The Koningsdam wasn’t meant to be the first cruise to hit B.C. waters this year.

Princess Cruises’ Caribbean Princess was scheduled to dock in Victoria on April 6 and Vancouver on April 7 but cancelled the arrival at the last minute.

The company said the move was to give extra time for a planned dry dock on April 7.

However, the cruise had also made it onto the U.S. Centres for Disease Control and Prevention’s “orange” status list, meaning 0.3 per cent or more of passengers had tested positive for COVID-19, triggering an investigation.

The Koningsdam remains listed as “green,” meaning there were no reported cases of COVID-19 or COVID-19-like illnesses.