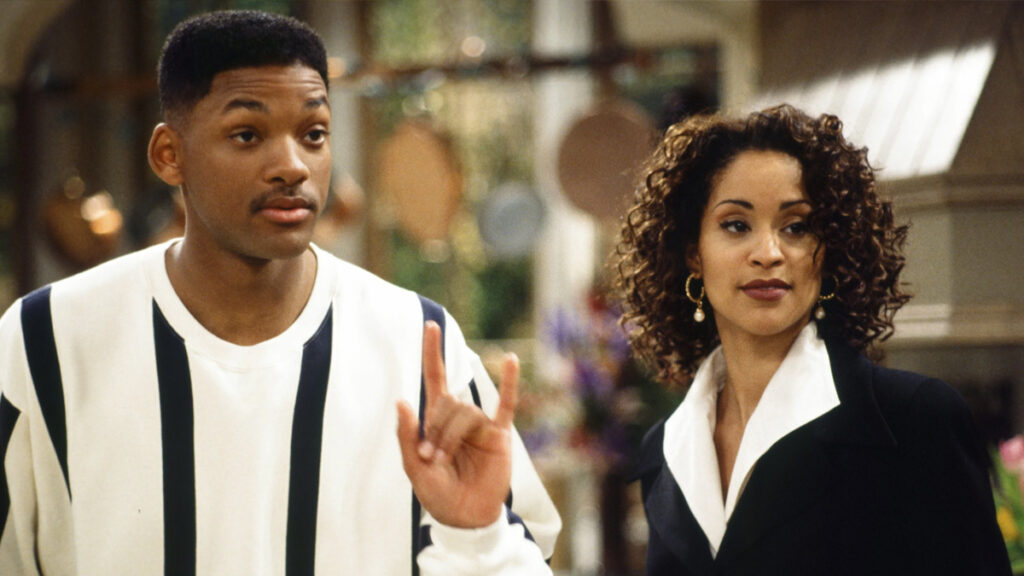 Karyn Parsons began her acting career with a small role on The Bronx Zoo in 1987, but just three years later, she became a household name when she was cast as Hilary Banks on The Fresh Prince of Bel-Air.

She was in her early twenties when she blew up on TV, but her love of acting stretched way back. As she told CrypticRock.com in 2017, she was “one of those kids that wanted to act since I was about six years old and it never went away.”

RELATED: What the ‘Devil’ Did Denzel Tell Will Smith at the Oscars (And Why You Need to Hear It, Too)

She then attended an acting workshop at 13 and became “addicted” to the craft. Vowing to pursue it as a career, she put all of her energy into manifesting her dream. “I said it, I meant it, and then I said it again a year and another year,” she recalled.

Her dedication paid off when she landed the life-changing role in 1990. Despite a headline-making feud between Will Smith and Janet Hubert (aka Aunt Viv), Parsons insists the experience was a great one. “We were like family,” she gushed. “The first week that we worked together we hit it off.”

That love was still there when they met in 2020 for HBO Max’s The Fresh Prince of Bel-Air Reunion. Speaking with TODAY, the actor called the experience “really emotional, and beautiful,” as well as cathartic. “It’s something we all really needed,” she said, adding how she “felt this tremendous weight lifted” afterwards.

Given her positive experience on the sitcom, which ran for six seasons, along with the tight bond she shared with her co-stars, why did Parsons eventually disappear from acting? We explain.

When The Fresh Prince of Bel-Air went off the air in 1996, Karyn Parsons wanted to keep acting. But she also wanted to broaden her horizons. She landed a few TV roles, including appearances on series like Melrose Place, but typecasting proved to be a real problem. “The popularity of the show and definitely the popularity of the character overshadowed anything else that I did,” she later admitted. So, in 2002, she had her last acting gig on a show called The Job, then she decided to pursue other avenues.

Realizing she wasn’t happy being asked to play the same role over and over again, Parsons made the brave decision to step back and reassess her life. Her current situation wasn’t bringing her the fulfillment she deserved, so she chose to be proactive and focus on something that would.

RELATED: What Will Smith’s Oscars Slap Reveals about Anger, Patience and Responsibility

In 2003, she married director Alexandre Rockwell and had her first child, daughter Lana, that same year. As she told Experience magazine, it was her proudest moment. “I was amazed by what I was capable of,” she gushed, admitting, “I call upon that experience sometimes when I need to remind myself of how incredible I am.”

Her decision to hit pause on acting was paying off, but she wasn’t spared from the natural tendency we all have of second-guessing our most life-altering choices. Indeed, she told CrypticRock.com that she did consider acting again and thought she “could just try and get back into doing it here and there.”

However, she soon realized “it takes a lot more commitment” than that. Parsons, now a mom of two (she had son Nico in 2007), was unwilling to step back from her role as a mother — “It was hard to drop everything for the audition” — and she wasn’t about to approach a job half-heartedly. In an interview with Metro.co.uk, she revealed her decision to leave acting ultimately was “not because I don’t love it,” but rather because “I have other things to tend to that are currently more important to me.”

What Is Karyn Parsons Doing Now?

These days, Karyn Parsons’ priorities include her family, plus her new hustle as a writer and founder of the non-profit Sweet Blackberry. While acting may always have a place in her heart, she was able to find new joy and fulfillment in what is a true passion project.

It all began in 2005 when, shortly after becoming a first-time mom, Parsons struggled to find “culturally appropriate films” to show her daughter. She decided to do something about it and started Sweet Blackberry, “to bring little known stories of African American achievement to children everywhere.”

RELATED: Why Daniel Day-Lewis Disappeared – And the Bizarre Job That Ended His Acting Career

Recalling her entrepreneurial journey, Parsons told Forbes how she was researching stories about lesser-known heroes and inspirational individuals from the African American community, and soon found plenty. She decided these stories needed to be shared with the world, so she got to work.

While she admits she “didn’t know anything about business at all,” what she did have an overabundance of was the drive to bring her dream to fruition. Just like she had done with acting when she was a little girl, Parsons believed in herself and didn’t let anything scare her away from the task at hand. “I just dove into it with passion,” she recalled.

Parsons began writing stories about the individuals she discovered and vowed to “do whatever I need to do to make it work.” That included running Kickstarter campaigns to raise the necessary funds, as well as tuning out the critics, and using her Hollywood connections when she could. After the finished writing, she found illustrators to animate her stories into short films, as well as A-listers (think Queen Latifah and Chris Rock) to narrate the projects.

RELATED: Why Maya Angelou Stopped Speaking – and How She Found a Voice that Changed the World

To date, she has made four films (all available on Netflix) and has published two books: “Saving the Day: Garrett Morgan’s Life-Changing Invention of the Traffic Signal” and “Flying Free: How Bessie Coleman’s Dreams Took Flight”.

But she’s not just putting content out into the world and forgetting about it — she’s working hard to ensure it reaches her intended audience. “I go and I visit schools and I screen them for the kids and talk to the kids,” Parsons said, enthusing, “I love it and it’s my favorite thing to do.”

She hopes to teach the next generation the important lessons she herself learned by unapologetically chasing her dreams. “If something is in front of you and it’s blocking you, you can figure out a way to get under it, around it, over it,” she explained, adding, “Don’t just say you can’t do it, don’t give up.”

Karyn Parsons Proves the Value of Refocusing Your Life and Career

As Karyn Parsons shows us, it’s perfectly alright to pursue different passions throughout your life. We all evolve and grow and it’s only natural that our interests should also shift. The key thing to remember is that changing your focus from one thing to another shouldn’t be seen as negative.

Pivoting is not the same thing as quitting, and you shouldn’t feel guilty about walking away from something you love if another priority enters your life. That’s exactly what Parsons did. While she still loves acting, when she realized it wasn’t delivering what it once did (namely because she was being typecast), she kept an open mind and embraced the opportunity to pursue something new.

RELATED: Gabrielle Union, Disney and the Vital Importance of Speaking Truth to Power

What’s more, Parsons is a great example of the greatness you can achieve when you stop placing others’ limitations on yourself. Speaking with Forbes, she shared how her unconventional switch from actor to author raised eyebrows, but she didn’t let that dissuade her. “Writing is something I had always wanted to do,” she said, noting how, “you can’t worry if someone sees you for that or not.”

Yes, it can be scary to take a leap of faith and leave your comfort zone behind, but the payoff can be huge.