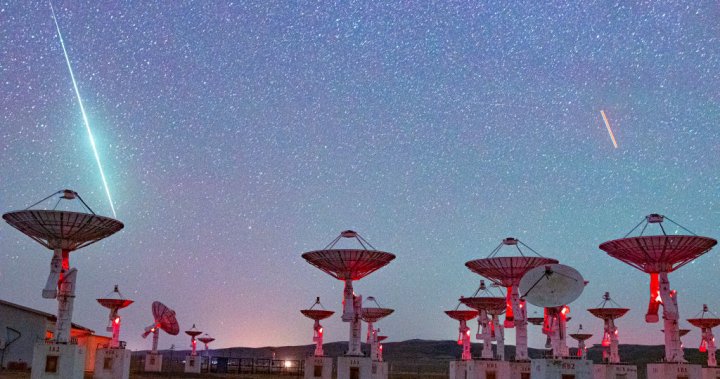 One of the peak days to observe the Lyrid meteor shower this year will fall on Earth Day, an international celebration of our pale blue dot that raises awareness for environmental protection.

And perhaps, there is no better way to celebrate our life-giving planet than to be reminded of the terrifying beauty of outer space — and just how small we are in comparison.

On the evening of April 22 into the morning of April 23, the Lyrid meteor shower will be at its most visible. If you’re interested in a late-night family outing or fashion yourself an amateur astronomer, then break out the lawn chairs and pack up the car for some spectacular stargazing.

What are the Lyrids?

The Lyrids are an annual meteor shower that take place in April.

According to NASA, the light show we see as shooting stars is actually shards of space dust that get ejected off comets as they pass around the sun. The Lyrid meteor shower is a result of the debris trail left by the comet Thatcher.

When the Earth passes through Thatcher’s dust trail, the debris disintegrates as it collides with our planet’s atmosphere, creating fiery and colourful shooting stars.

The Lyrids are one of the oldest known meteor showers in recorded history. The first documented sighting of the astronomical event was in 687 CE by Chinese observers. That means that humans have been enjoying the Lyrid meteor shower for at least 2,700 years.

The Thatcher comet was first discovered and last spotted from Earth in 1861. Its orbital period around the sun is about 415 years so it won’t be seen again until 2276. Until then, we’ll just have to enjoy its beautiful dust trail in the form of the Lyrids.

Tips on how to watch the Lyrids from anywhere in Canada

The timespan between April 21 and April 23 will be the best time to watch the Lyrid meteor shower, with its predicted peak occurring at 12 a.m. EDT on the morning of April 22.

The moon is currently in a gibbous phase which means it is still quite large and bright in the sky, making stargazing more difficult. Thankfully, the moon is waning, which means it will get smaller and smaller each night.

As a result, the best conditions for star-gazing may be the evening of April 22 into the next morning or before the moonrise begins on either night.

If you want to watch the Lyrids by moonlight, it’s best to sit in the shadow of a tree or building. More meteors will be visible if you are out of the direct path of moonlight.

Under ideal conditions, with no moonlight, observers can see up to 10 to 15 shooting stars per hour. But the Lyrids are also prone to unpredictable surges that can result in up to 100 visible meteors per hour.

Canadians are well suited to view the Lyrids as they are most visible in the Northern Hemisphere.

Canada’s spring has been cold so far. Why it may linger for longer

According to EarthSky, a specialty publication focusing on astronomy, the best way to pinpoint where the meteors will start falling is to look for the star Vega: the Lyrid’s radiant point.

Vega begins to rise above the horizon at around 9 p.m. to 10 p.m. local time in the Northern Hemisphere. Look in the northeast sky to spot it (you can use star charts or any number of night sky apps to help you pinpoint Vega.)

At around midnight, Vega will have risen enough that the Lyrids will appear to streak across the northeast sky. Just before dawn, Vega will be high overhead and shooting stars will look like they’re raining down from the top of the sky.

Stargazers who look directly at the Lyrid’s radiant point near Vega will notice shorter shooting stars. It’s best to look in the northeast direction but not directly at Vega to see longer streaks in the sky.

Facebook Marketplace: The good, bad and ugly — and why Canadians remain loyal to declining platform

Some best practices for general stargazing include checking the weather and cloud cover in your area diligently. Clear skies are important for observing meteor showers so check conditions in your area before embarking on a, potentially, long drive to get away from light pollution.

This brings us to our second point – be prepared to drive long distances to get away from urban areas or clusters of bright lights. Too much light pollution will stymie even a pro’s attempt at observing a meteor shower as the glowing space dust is too dim to compete with the bright lights of urban Canada.

0:23
Meteor lights up sky over parts of Vancouver Island

For most regions in Canada, driving outside the limits of your city or town will be enough to escape the majority of light pollution you might see. However, in more developed areas of southern and central Ontario, and along the St. Lawrence River, residents might have a harder time finding dark sites to stargaze.

For Ontario and Quebec urbanites, your best bet is to try a provincial park in order to escape the dome of light pollution.

Our last tip is to be patient.

It’s ideal to wait about 30 minutes in a dark viewing spot to allow your night vision to develop, making it easier to spot shooting stars. During that time, avoid looking at bright lights, as doing so will reverse the progress you’ve made to develop better night vision.

If you need to use your phone, try shifting it to night mode to filter out blue light and reduce the overall brightness.

Bring a lawn chair or picnic blanket so you can watch the night sky comfortably and be sure to wear multiple layers if you’re in a colder part of the country.

Once you’ve followed all our tips, all that’s left to do is sit back or lie down, and enjoy the show.

4:47
The Perseid meteor shower peaks during the month of August