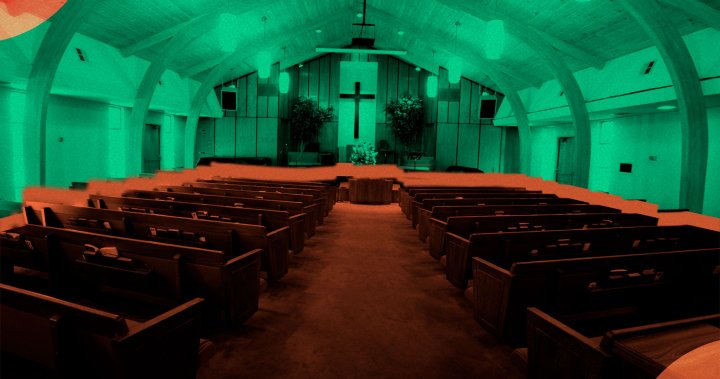 Many Canadians now believe Catholicism, evangelical Christianity and Islam are more damaging to society than beneficial, a new survey shows, as people across the country continue to turn their backs on religion.

A new Angus Reid survey, released Monday, has shone a light on perceptions of certain religions in post-pandemic Canada, at a time when religiosity in the country is already at an all-time low.

“Broader society still is not fully comfortable and fully clear about what to do with religion, and therefore they show some signs of discomfort,” Abdie Kazemipur, a University of Calgary sociologist and the chair in ethnic studies, explains.

“It’s not intolerance at the moment, it is discomfort.”

The survey reveals that all religious groups surveyed viewed evangelical Chistianity as more damaging to society than beneficial, while Islam was also perceived in a largely negative light. Respondents from both religions were also more likely to feel that Canada doesn’t make room for their beliefs in society.

3:21
How has religion’s role changed over the years for Canadians?

How has religion’s role changed over the years for Canadians? – Jan 8, 2022

Rania Lawendy, CEO of Action for Humanity and former Muslim Association of Canterbury spokesperson, says that’s because Islamophobia remains rife in Canada and Muslims are still made to feel that their religion is “not conducive to the universal values of Canada.”

“You only feel ‘othered’ when others make you feel like ‘the others’,” Lawendy says.

“How can I not feel othered when Bill 21 exists?”

The survey comes after data released by Statistics Canada in late 2021 showed only 68 per cent of Canadians 15 or older now report having a religious affiliation. It’s the first time that number has dipped below 70 per cent since StatCan began tracking the data in 1985.

The new Angus Reid data is a culmination of two 2022 surveys — one conducted between Jan. 21 and Feb. 3 and including a group of 1,290 Canadians from the four largest non-Christian faith groups (Muslim, Sikh, Hindu and Jewish) and another conducted from April 5 to 7, involving 1,708 participants from the general population.

The data shows that one-fifth of Canadians (19 per cent) now classify themselves as “non-believers.”

The largest group of Canadians are the “spiritually uncertain,” representing 46 per cent of the population. One-third (34 per cent) definitely believe in God or a higher power, while 31 per cent think a higher power exists but are less certain.

‘Gone by 2040’: Why some religions are declining in Canada faster than ever

More than half of those who identify as Roman Catholics (52 per cent) and mainstream Protestants (56 per cent) fall into the spiritually uncertain category.

Just 16 per cent of Canadians consider themselves “religiously committed,” with high levels of worship and belief in God, while 19 per cent are “privately faithful.”

In terms of religions themselves, three-quarters of evangelical Christians (74 per cent) and 46 per cent of Muslims are considered religiously committed, while those raised in the Sikh or Hindu faiths tend to be considered “privately faithful” — those who do not necessarily gather as formally and frequently, but continue to profess a strong personal connection to their religion.

Why evangelicals and Islam are ‘damaging’

It is, in turn, the two most committed religions — evangelical Christianity and Islam — which have been reported as more damaging than beneficial to society, according to the new research.

However, these assessments varied widely depending on what religion the respondent identified as.

Survey results showed that atheists, in particular, were overwhelmingly critical of the influence of evangelical Christians on society, but are largely positive about the perceived impacts of Sikhs and Hindus.

Canada’s largest religious group — Roman Catholics — are more likely to perceive evangelical Christians, Muslims and Sikhs as doing more harm than benefit to the social fabric of the country but view other faiths positively.

“There are different dynamics behind the kinds of sentiments that are expressed for these different groups,” Kazempiur explains.

Kazemipur says the “visibility” of Sikhism and Islam is due to the wearing of religious symbols, such as hijabs or turbans.

Islam, Sikhism and why immigration drives religion in Canada: ‘It’s the curriculum of our life’

Lawendy says Canadians have a misperception of what Islam is, often believing it to be a violent religion founded on extremism, due to “how it’s portrayed in the media.”

“If Canadians actually knew what it meant to be Muslim, they’d be encouraging Muslim immigration,” she says.

But, according to the survey, for those who reported no religious affiliation, only the presence of Hinduism, Sikhism and Judaism are more likely to be seen as positive than negative for Canada.

Evangelicals say they are portrayed as ‘deviants’

Evangelical Christianity — which encompasses dozens of denominations such as Baptist, Pentecostal and Mennonite and characterized by its piety — was the only religion seen as more damaging than beneficial by every other self-identified religious group.

Rick Hiemstra, director of research at the Evangelical Fellowship of Canada, says the religion now makes up about seven per cent of the Canadian population, down from about 12 per cent in 2003. However, he says it’s hard to gauge accurate numbers as, in the past two decades, many churches have sought to distance themselves from evangelicalism due to its negative connotations.

“People sort of shun the labels and you see this in a lot of churches, who are distancing themselves from the denominational tradition, becoming community churches and taking Baptists or Pentecostal out and becoming, say, the Community Church of Ottawa,” Hiemstra says.

1:28
Anglican church could run out of members by 2040: Researcher

That’s because, he says, devout religions such as theirs are often portrayed negatively in the media or popular culture — with associations to “pedophilia or people behaving badly,” as well as more extreme forms of evangelicalism found in the U.S.

More broadly, he also believes that while once there was a “social benefit” of being considered religious, there is now a “social cost” to it.

“I watch Netflix just like everybody else. And really when you see the perceptions of evangelicals or Christians or religious people, generally… devout religious people are usually presented as deviants,” he says.

“This is really, I think, where people are getting a lot of their ideas about religious people generally and forming those opinions, not based on firsthand experience or knowledge, but based on what they’re presented with.”

When it comes to self-reflection, the survey showed that those who identify as religious are, naturally, more likely to believe religion makes positive contributions to Canadian society than negative ones. Two-thirds (67 per cent) of evangelical Christians believe they play a positive role in society, compared to 29 per cent of Roman Catholics.

Hiemstra says this is because evangelical Christians tend to be more generous with donations and volunteering.

On the whole, however, 31 per cent of respondents say the good religion plays in society outweighs the bad, while 22 per cent say the opposite. Almost half of Canadians (47 per cent) say religion contributes good and bad to society in equal amounts.

This has perhaps contributed to perceptions from certain religious groups that their beliefs are not welcome in society. More than half (56 per cent) of evangelical Christians say they feel shut out of society for their beliefs, with Muslims being second most likely, at 26 per cent.

How COVID could change religion in Canada forever: ‘There is no going back’

Hiemstra says several factors have contributed to this — more recently because places of worship were considered non-essential services during the pandemic and were closed.

“[It] was sort of an unfortunate language that was adopted,” Hiemstra says.

“So I think a lot of evangelicals and people in religious communities generally sort of reacted to this implicit judgment about their place in society.”

He says Islam and evangelist denominations share a perception of being “strange” to outsiders, and “some of the tension is just the strangeness of of being unfamiliar.”

Lawendy believes the number of Muslims who feel shut out of society is likely “much higher” than 26 per cent.

“I deal with microaggressions all the time around my masjid, my intelligence, my education and these stereotypical views from mainly the media, partly from political discourse, partly from white national supremacist groups and partly from polarized politicians. And this was pre-Trump, too,” she says.

“I’m aware of any danger when I go into a masjid, that’s a problem.”

She says systemic racism must be dealt with in Canada before Muslims can feel totally accepted by society. This is part of the work she’s working on to encourage integration and inter-faith dialogue.

“The vision is to be integrated into society but still have your distinct identity. We want to be part of the fabric of Canadian society.”

How immigration sustains religion in Canada

However, these negative feelings towards religious groups don’t necessarily translate to religious intolerance, Kazemipur says, but more of a “nervousness” or “discomfort” from a modern-day society that does not know how to include religion anymore.

This discomfort can wane with time and integration of religious groups – however, if that doesn’t happen, anti-religious views often become anti-immigration views, Kazemipur says. He points to France’s controversial immigration laws for asylum seekers as an example of this.

Canadians born elsewhere are less likely to report no religious affiliation than those born in the country (18 per cent compared to 27 per cent), the survey shows. At least half of those who identify as Muslim, Hindu or Sikh were born outside of Canada.

A similar trend was reported by StatCan data, because as Christian religiosity falls to unprecedented lows, minority religions such as Sikhism, Islam, Buddhism and Hinduism continue to thrive, fuelled by immigration.

In fact, by 2036, StatCan predicts that the number of people affiliated with non-Christian religions could almost double.

One stand-out aspect of the perceptions portion of the survey concerned Judaism and Islam — which have had a tense and tumultuous history. For Jews in Canada, the only religion they view as more beneficial to society than harmful, other than their own, is Islam. The feeling was reciprocal for Muslims.

In terms of domestic geography, the Prairies continue to be Canada’s most religious provinces, with about one-quarter of respondents in Alberta, Saskatchewan and Manitoba categorized as “religiously committed” — meaning people report high levels of attendance of worship, active prayer and a deep belief in God.

Quebec residents are most likely to eschew religion.

Kazemipur says this is largely down to residents of Quebec living in “homogenous towns or neighbourhoods,” without “a lot of interaction between different groups.”

Women over 55 most likely to be religious

The survey also found that first generation Canadians are much more likely to identify as religious, and being raised in religion remains common in Canada.

Seventy-two per cent of respondents said they grew up with religious teachings, including just over half (54 per cent) of those who currently have no religious affiliation.

Being raised in a religious tradition is more common for those who identify as Muslim (86 per cent) or Roman Catholic (82 per cent) than other religions.

3:21
Sociology teacher on the future of religion in Canada post-pandemic

Sociology teacher on the future of religion in Canada post-pandemic – Jan 8, 2022

Younger Canadians are more likely to be non-believers. One-quarter of men (26 per cent) and 22 per cent of women aged 18 to 34 years old fall into that category. Women over the age of 55 are the most likely of any group to be more religious, and the least likely to be in the non-believer category.

Hiemstra says this decline in religiosity has been accelerated by the pandemic, with many of their churches losing 20 per cent of their participants.

The survey data supports this. In April 2020, just after the onset of the pandemic, there was a slight increase in those reporting as non-believers or spiritually uncertain, whereas there was a slight decline in those who were considered religiously committed or privately faithful.