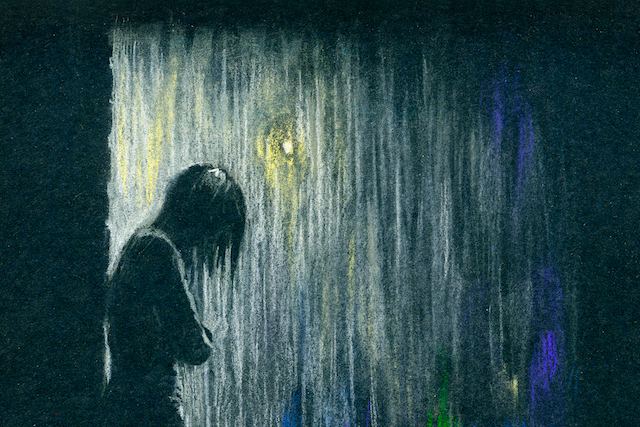 “The reality is that you will grieve forever.” ~Elizabeth Kubler-Ross and David Kessler

March is always hard for me. Has been since March 21, 2017. That’s the day my eldest son, then twenty-seven, found his father hanging in our basement. I apologize for being so brutal.  But it was.

What no one tells you about grief, what catches you by surprise, is the fact that you can be five years out and still, when March comes around, you can find yourself in a fetal position on the ceramic floor of your kitchen—howling like a wounded dog because a memory slashed unbidden across your brain and cut you so deep that your legs couldn’t hold your heavy, heavy weight. And you wonder—no, you know—that this will go on for the rest. Of. Your. Life.

How to describe what it’s like when your heart breaks… It’s something I’ve been trying to do for five years. Not out loud anymore because others tire of it. More so, I try to describe it to myself. Hoping that by describing it I can move forward, categorize it, and store it; put it away, out of sight, out of mind.

Sure, I’ll go on. Most of us do. Muscle memory accounts for 90 percent of how you go on, trust me. In those first days I would say the percentage is even higher. Sleep, get up, make food, eat, feed the dog, put clothes in washer, clean the dirty dishes, put out the garbage, sleep, get up, make food…

Suicide loss, I’ve found, is unlike any other loss. Oh, this is not a contest of feelings. No, every loss of a loved one is felt deeply, profoundly. No contest. Suicide loss, however, results in countless unending ripples of devastation for the survivors every single day of the rest of their lives.

I think of my sons. Always. The oldest is forever altered. His father was his best friend. Their relationship had just achieved that rewarding maturity of mutual respect. They enjoyed each other’s company. The youngest, twenty-three, was still working out childhood resentments, but I could see the potential for closeness. He was spared seeing his father’s lifeless body.

We all now live with the special baggage of suicide survivors: guilt (why weren’t we there? I could have prevented it.), shame, anger (how could he?!), rage, trauma, fear (will my sons, will my mother, will my brother…), regret and deep sorrow for yesterday, today, and what will never be. Every anniversary, every milestone, every holiday, every celebration will rip the Band-Aid off again and again.

Sometimes, the full impact of a loss takes time. For me, the first year was a “roller-coaster of emotions”—a common, but completely accurate phrase.

To the outside world, I was pretty darn normal: keeping house, inviting people over, laughing, going about my business. Few, if any, noticed the cracks: gradual isolation, bathing only twice a week, forgetting things more than usual, horrible financial decisions, sudden breakdowns, crying in the grocery store, in traffic, in the shower, on the phone, in the middle of a conversation. Five years out and many of those symptoms remain.

I found a therapist. She let me talk and weep. I was prescribed antidepressants. Nothing helped. I moved through days, functioned at a primal level showing the outside world only the version of myself that made them comfortable.

No one, I don’t care how well-meaning they are, can understand this loss other than another suicide survivor. It’s true. Just as the surviving parents of a lost child know a uniquely singular, searing pain, so, too, does the suicide survivor.

It’s important to seek out those who understand our pain. I recommend it. And grief counselors. And therapists who are especially trained in PTSD. Seek them out.

I found a group of suicide survivors that met monthly. Hearing about their losses, especially the loss of sons and daughters, allowed me to appreciate the importance of finding a community of people who understand. In the hollowness of these survivors’ eyes, however, even as we embraced, I could see the singularity of their respective journeys. We may share, but we are alone in our pain.

Memories do sustain me, as others so helpfully say. Sunny days at the beach are calming (unless the crashing waves remind me of past vacations with my husband and sons years ago).  Drinks and drugs provide a temporary escape (when I can resist the deadly seduction of blissful nothingness). The company of others can keep my mind from the endless cycles of black thoughts. Music can be helpful. Or dangerous.

“Stay active! Meet new people! Get out and do something! Time to move on! Get over it!” I can hear the words of concerned family and friends.

People mostly mean well. Time will pass. Things happen. Kids grow. Other cherished loved ones will die. I have come to understand that death is relentless, and that I must bear other cruel deaths as well as this one.

My sons are my reasons for living. Period. In my most desperate times the thought of their pain has been the only thing between me and oblivion. I will never do that to them. And they, in turn, know that either one of their deaths would mean my end. I have no doubt that I could not survive that. I need for them to be okay.

I will, as they say, put one foot in front of the other every single day, if not for myself, for my sons. Even though they are grown. Even though they have their own lives of which I am but an infinitesimally small part. I have to stay alive because they have already suffered enough.  Suicide survivors understand that.

And so, I hate March. I begin to dread it in January. By February I am coming up with excuses to stay home. And, on any given night in March, I am balled-up on the ceramic tile of my kitchen floor howling like the wounded animal that I am. But I get up the next day and I try again.

Vicki Schneider is sixty-seven years old. She has two sons, thirty-two and twenty-eight. The eldest is a public defender in Ohio and the youngest is a developer/IT systems administrator in Colorado. Her husband, their father, committed suicide in 2017. She is a University of Florida alum with an MBA from Franklin University in Columbus, OH. She retired in 2013. Currently relocating to Ohio after spending a year in Saint Augustine, FL, trying to figure out what to do with herself.

Dear Everyone Who Tells Me I Should Reconcile with My Parents
Chris Pratt’s Tragic Divorce Taught Him One Crucial Thing before Marrying Katherine Schwarzenegger
Why Stability Feels Unsettling When You Grew Up Around Chaos
5 Times Madonna Completely Destroyed Your Perception of Women Over 50
Corporate Pride: What’s Under Your Rainbow? (i4cp login required)