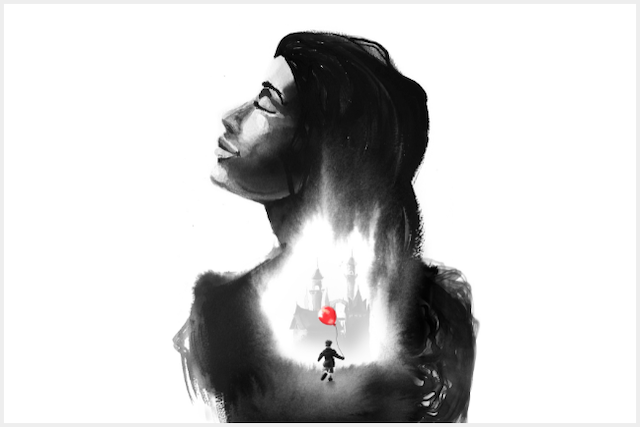 “I love when people that have been through hell walk out of the flames carrying buckets of water for those still consumed by the fire.” ~Stephanie Sparkles

I have a tattoo on my back of Charles Bukowski’s quote “What matters most is how well you walk through the fire.” It spoke to me as I had been walking, often crawling, through a fire for much of my life.

At times, I took different paths, skipping through fields of flowers, but eventually I would find my way back to what I knew, which gave me a strange sense of comfort—the fire whose roots had begun in childhood, with my abusive mother.

I used to be consumed by this fire. I have another tattoo on my foot that reads “Breathe.” For years I lived with a very dysregulated nervous system, constantly alerting me to the threats of the flames forming around me, and breath was something that eluded me.

How could I breathe when at any moment she could walk up the stairs and find something to lash out at me over?

How could I breathe when no one wanted to hear how I felt, and my emotions were something I did not understand, nor know how to handle?

How could I breathe when everything was so frightening?

How could I breathe when no one ever showed me how?

Those entrusted to my care were in their own fires that they had never learned to come out of. So of course, as I grew, I felt unsafe and uneasy. And I learned to ignore my breath, ignore that others were able to feel it move through their body, and learned to see only flames everywhere.

I grew up in a traditional home as a child of immigrants who had come to the USA for work and to give their children a better life. I went to Catholic school, where I threw myself into academics as a way to be seen, and excelled. My parents were excellent cooks and displayed their love for us through the kitchen table. I had all of my physical and academic needs met.

I spent my early childhood playing with my brother, who I latched onto as a support system. My mother’s inability to soothe us as babies and toddlers created very sensitive, shy children, deeply afraid of the world around us and deeply connected to each other.

Unfortunately, my brother and I began to distance during our preteen years. We had created different survival strategies to navigate my parents, and he began to view me as the problem, as my mother was teaching him. I then began to view myself through the same lens.

I was ridiculed, abandoned emotionally, shamed, and made to believe the dysfunction of the family lay entirely on me. There was a period of physical abuse as well, but during these situations, I at least felt seen.

I was gaslit to question everything I believed to be true and found myself in imposed isolation in my childhood and teen years, later self-imposed. The world felt too frightening to face. As I grew older, I rebelled against the isolation by looking to others to help soothe me, especially romantic relationships.

If they didn’t soothe me as I wanted, I grew angry and hurt, isolating myself more and more, or lashing out internally or externally.

I looked to ease the suffering inside with external gratifications, shopping, traveling, and sex. Unfortunately, nothing could soothe the pain I was feeling.

In my early twenties I went to a therapist and could do nothing but cry. After a few months of not being able to communicate, she insisted I take benzodiazepines or we would be unable to continue working together.

My symptoms worsened both emotionally and physically, and I now needed “saving” from both. The helplessness I learned early on continued, as did my need to have others make me feel safe. Both my body and brain became impossible to withstand, and proved to me that I was a victim of life and no one cared about me.

I found relationships to validate this idea, with addicts, narcissists, and codependents who all eventually grew tired of my need to be loved and soothed out of my pain.

I was attracting the familiar in these people, who could not show me the love and safety I needed. In other words, I was attaching myself to others to regulate, but they too were stuck in a cycle of dysregulation.

I found various ways to hurt myself, overspending, starving myself, overexercising, and on more than one occasion taking too many medications to calm myself down, and finding myself in an emergency room. The familiar was living in my nervous system and demanded to be entertained.

After decades of chronic health issues due to emotional and physical trauma, they finally hit a peak when I was forty-seven and no longer able to work, the one area of my life I’d had some control of. I had to learn to breathe or be completely extinguished by the flames. During this time, I began to learn how to put out the fires.

I worked hard on retraining my nervous system out of the fight-or-flight state it had entered when I was not soothed as a baby, and rewiring thoughts and behavior patterns created as an extension of that state. In this process, I found the authentic part of myself, the inner child, which brought a deep peace, the peace of integration.

An integral part of my healing came from practices of forgiveness and compassion. As I rewired old patterns living in my nervous system, I learned about how the brain works, how trauma is stored there, and how our realities are shaped by early experiences.

Each day in my practices I discovered new associations, when new thoughts and behaviors had started, and had to look at these strategies and their results with self-compassion and forgiveness.

At first, this was difficult, as it was new to my brain, but as I practiced it became easier, and I started feeling self-compassion and self-love for the first time.

As I worked with my own toxic personality in these practices, I experienced deep grief for the past and what I was not able to enjoy as a result. Anger was holding on, and I knew it was time to let go. So, I began a practice of curious empathy for the woman who had started my fires, my mother. Awareness of my own dysfunction, self-compassion, and now self-forgiveness allowed me to do the same for others, including her.

In this case, curious empathy meant becoming aware of her patterns and where they came from by connecting to my own experiences and empathy.

I had observed her throughout my life to learn about what I was experiencing and how to navigate her, as well as others in the world. I also read tons of self-help books about personality disorders and toxic people, but cognitive knowledge wasn’t enough to understand my mother.

I watched, listened, and heard stories from my father about my mother’s childhood. I drew upon my own strategies and where they originated. I opened myself up to curiously knowing her, at first from a distance (during this time of healing), and then I incrementally exposed my healing nervous system to her with empathy.

When I felt balanced and regulated enough, I rejoined our relationship, but with strict boundaries—for both of us. And I found a somewhat different human in front of me, one who had softened in her old age but still retained old behaviors when “triggered.”

I began to identify her triggers and remained strong when she reacted. I now knew no other way; my nervous system and heart had been retrained into compassion.

I came to understand that she had created toxic survival strategies because of an inability to communicate and soothe emotions and needs in an effective way. She had been stuck in a fight-or-flight state that prevented her from seeing the world as it was, and seeing the motivations of others clearly.

And I had learned (and now unlearned) similar methods of interacting with the world.

I often pictured her as a child or a teen and connected with this version of her through my own inner child. In the moment, I was able to change the hurt and anger I felt to compassion for the way she was trying to get what she needed. This was followed by an inner forgiveness and releasing of the negative emotions.

I made it clearly known what I would accept, and often joked with her about the way she was acting. She responded with smiling or laughter.

It became clear that she reacted when she felt vulnerable, and I understood that throughout her childhood, vulnerability was not acceptable, and she was shamed in it.

In identifying her methods of showing love, I felt loved and seen, and it was easier to react to her with forgiveness and compassion. It became natural to me to speak as the “parent” (adult) when her old armor of defense came up.

In daily forgiveness and compassion practices, I find enormous love for the woman still stuck in a fight-or-flight state created in her childhood. There are times I pull away to reinforce that her behavior is unacceptable, but these times are not as prevalent as before.

As I changed my behavior toward her, she began to change hers toward me. As I regulated my nervous system into safety, it seemed to soothe hers, and she inched closer to the idea of vulnerability with me.  As I let go and replaced the anger with compassion, she felt safe. It is with this safety that she is able to chip away a tiny piece of her armor in our interactions.

I cannot ever change her, and she will pass with the trauma state she is in as her identity. But, for my own well-being, I chose forgiveness and compassion, to bring her a small drop of water each time I see her. Remaining in the fire with her, by being angry, was not an option any longer.

I found my way out of a fire that had nearly taken my life and hope to continue sharing my experience of healing. These days I find myself skipping through fields of flowers on a regular basis, and feel it is a blessing to share it with those who have not yet gotten there—and those who may never.

**I am not suggesting that anyone should keep people in their lives that they feel are “toxic.” We all need to do what we feel is best for us based on our own unique experience.

Maria spent years looking for relief from the suffering she experienced due to the toxic “stories” she received as a child. These stories, and the medications prescribed to ease them, led to dis-ease physically and mentally. Eventually she reconnected with her authentic self and broke through to a lighter side of life. She works each day to be a better version of herself and learn different modalities to help others. You can find more of her story here.