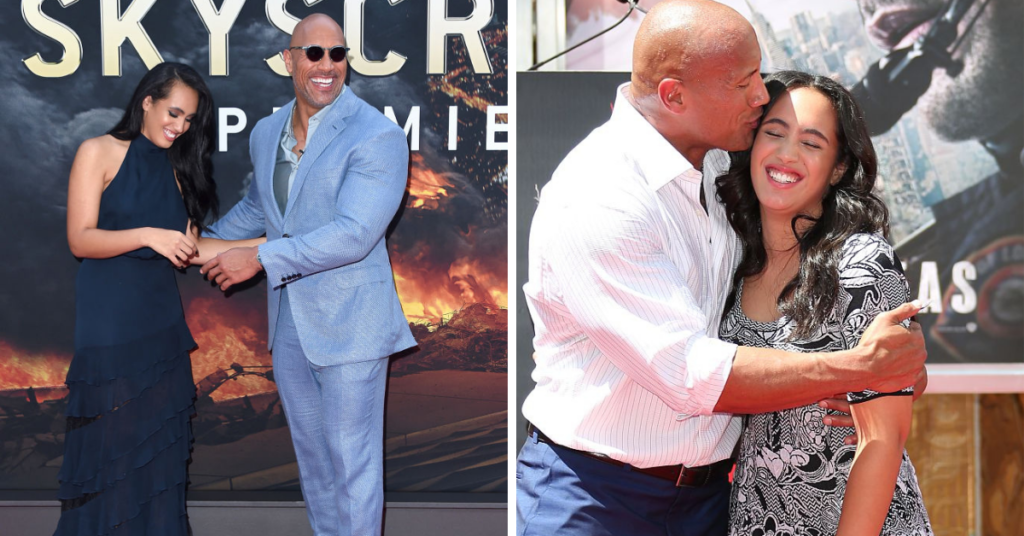 Dwayne “The Rock” Johnson wears many hats. Since getting his start with the WWE back in 1996, he’s become a wrestling legend, an A-list movie star, a doting girl dad, and an all-around inspiration.

RELATED: Dwayne ‘The Rock’ Johnson Rejects a Teen’s Prom Invite – What Happens Next Shocks Her

Johnson’s motivational quotes and approach to life have shown countless fans (us included) the importance of being true to yourself and pursuing your dreams without apology. The Jumanji star has always been a proponent of blazing your own path and we’re now learning that he’s instilled that very lesson in his eldest daughter, Simone Johnson.

So why is she receiving such tremendous hate online?

Who Is Simone Johnson?

In 2019, Dwayne ‘The Rock’ Johnson tied the knot with singer/songwriter Lauren Hashian with whom he has two daughters, Tia and Jasmine. Before that, however, he was married to Dany Garcia from 1997 to 2008. The pair, who are still business partners to this day, had one child together, daughter Simone Garcia, born on August 14, 2001.

Simone first stepped into the spotlight in 2018 when she signed with IMG Models and was chosen to be that year’s Golden Globe Ambassador. The following year, she graduated high school and, as her proud papa shared on Instagram, she was planning to attend NYU.

However, everything changed when she suffered a nasty injury just weeks before she was meant to start college. “I blew my knee out completely,” she told the Swerve City podcast. But that huge curveball turned out to be a blessing: “It sucked but in a way it made me rethink everything,” she shared.

RELATED: Dwayne ‘The Rock’ Johnson Makes a Surprise Appearance at a High School Prom (Sort of)

In the end, she told her parents that she’d rather go to college in Orlando, Florida because that’s where she could also follow in her father’s footsteps. No, not acting — wrestling. Her parents were immediately on board and, in 2020, she became the youngest WWE signee ever at the age of 18.

She has since begun training at the WWE Performance Center in Orlando and, according to Talk Sport, she’s proven to be a “monster in the gym” and a “top recruit”. As Simone explained, the ability to continue her family legacy “means the world to me.” That’s because not only was her dad a 10-time world champion, but her grandfather, Rocky Johnson, and great-grandfather, Peter Maivia, are both in the WWE Hall of Fame.

Simone’s willingness to adapt and face life’s harder moments head-on is a truly valuable lesson. After all, unforeseen circumstances are unavoidable, and it’s important not to let them derail you from pursuing your dreams.

It’s undoubtedly something she learned from watching her dad work through his own uncertainty in order to achieve his goals. As Johnson once admitted to Oprah, he felt shook up when he first decided to swap wrestling for acting full-time, but he also knew it was important to take that leap because it was the only way to fulfill his deepest aspirations.

The Rock’s Approach to Fatherhood

It’s safe to say Simone Johnson has some of the most supportive parents around! Case in point: Shortly after she announced her WWE signing, Dwayne Johnson couldn’t help but gush about how proud he was of his little girl.

During an appearance on The Tonight Show Starring Jimmy Fallon, he said, “It blows my mind. First of all, what an honor that my daughter wants to follow in my footsteps, but more importantly […] she actually wants to create and blaze her own path, which is just so important.” He also gave her props for “working her ass off” from the age of 16 to meet her goals and concluded, “I’m very, very proud of her.”

RELATED: Dwayne Johnson’s Most Inspirational Quotes about Success for When You Hit Rock Bottom

As the actor has repeatedly explained, he believes the most important thing you can do as a parent is to “just be there” for your kids and that’s how he’s raised his daughters. As he told People, he’s learned how important it is to listen and, when things get tough, he helps Simone and her younger sisters, “solve whatever the issue is, but with them compared to for them.”

Indeed, as he shared on Oprah’s Master Class, when Simone was first born, he made her a promise: “I will always, always take care of you, for the rest of your life. You are safe.” He vowed to, “lead our life with love. Not success, not fame, not anything else but, ‘I’m always here for you. I love you.’” And that’s exactly what he’s done.

It’s this unconditional love and support that likely helped Simone be honest with herself and her parents about her career aspirations. It surely also helped her work through her first experience with the negative side of fame.

Why Is Simone Johnson Getting Hate Online?

Fame is a two-sided coin, and for all of the love celebrities can get from fans, they can be faced with just as much hate from critics. Simone Johnson got a taste of this first-hand when, in May 2022, she announced her wrestling name to the world.

The 20-year-old is taking her WWE training seriously and she’s now one step closer to realizing her dream, as she’s revealed that when she finally enters the ring, she’ll be known as… Ava Raine!

Many fans were all for it, but unfortunately, others scoffed at her choice. As Today noted, some Internet trolls took issue with Simone not paying tribute to her dad through her wrestling name, but she simply wasn’t having it.

RELATED: Dwayne Johnson Opens Up About The “Biggest Fight” He’d Ever Had With His Dad Right Before He Died

When one Twitter user suggested she should have chosen The Pebble as her moniker, she clapped back, writing, “I beg of you guys to find a new joke. Anything.” She then explained why it was so important to find her own persona because she wants to build a career in her own right. After underscoring the fact that, “a name doesn’t discredit any prior accomplishments from any family,” she wrote, “I could build my entire career around my father and people would still bash me anyway.”

Simone makes an incredibly valid point with that last statement. It doesn’t matter who you are or how successful you become, naysayers will always find a reason to criticize you. While this is something that people in the spotlight experience on another (very public) level, no one is immune to receiving criticism. It unfortunately happens way too often and, as Simone shows us, the best thing to do is shake off the negativity, ignore the haters, and just do you.

Whatever it is you’re passionate about, chase your dreams unapologetically and don’t allow anyone to tear you down or sow doubts in your head. Rather, allow your passion to push you through the obstacles. What’s more, don’t forget to turn to those who love and support you, whether they be family or friends, because they’ll always have your back.

How to Navigate Your Quarter-Life Crisis in 5 Easy Steps
The Hidden Source of Regret (And How To Overcome It)
You’re Making Decisions The Wrong Way – Here’s How to Do It Right
Why We Champion the 4 Day Week
The Power of Reframing: 3 Ways to Feel Better About Life