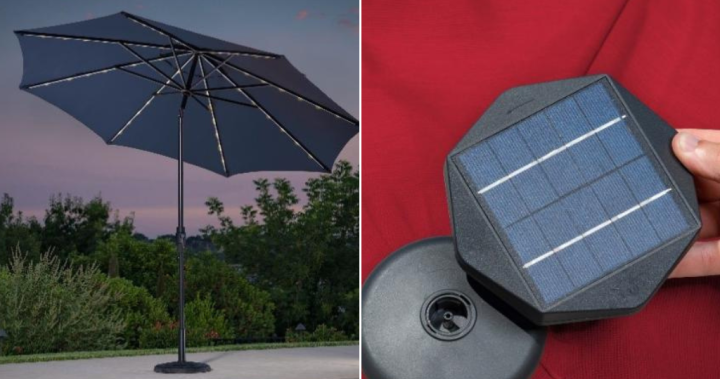 Health Canada is alerting Canadians to a patio umbrella recall, saying the umbrellas are a fire and burn hazard.

The umbrellas, sold at Costco Canada, have been known to catch fire after the battery unit that powers the LED lights in the product overheats.

Health Canada issued the recall on June 23, saying that customers should stop using the SunVilla 10-foot Solar LED Market Umbrellas immediately and return them to Costco for a refund.

According to the government website, the umbrellas have been sold in various colours and feature LED lights on the arms inside the umbrella.

The umbrellas have a solar panel with a black cover on the back of the solar panel puck. The solar panel cover is marked with “YEEZE” or “YEEZE 1” near the top of the cover.

SunVilla recommends that in addition to discontinuing the use of the umbrella, customers should remove the solar panel from the umbrella, store the panel out of the sun and away from combustible material and not charge the panel.

For more information, consumers can contact SunVilla by telephone 866-600-3133, by email at LEDRecall@sunvilla.com or visit the company website.

Confessions of an Extrovert: Why I Now Love My Alone Time
Coping with Abuse: Why Therapy Wasn’t Helping and What I’m Doing Now
Candace Cameron Bure’s Reaction to Being Called “the Rudest Celebrity” May Change Your Mind About Her
The Rise of Damien Rider – Extreme Endurance Adventurer | Surviving Unimaginable Abuse
Outshine The Dark (Official Music Video) Song About Depression