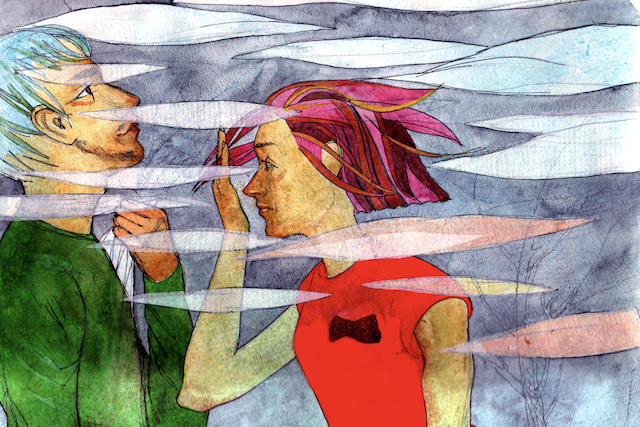 “The truth you believe and cling to makes you unavailable to hear anything new.” ~Pema Chodron

I was recently having dinner with a group of friends, and I casually mentioned that I’ve been making more effort in my life to help prevent climate change.

Across the table, someone looked straight at me and said, “You know human-induced climate change isn’t real, right?”

I was shocked because I’ve known this person for years and we’ve always agreed on important topics in the past. I immediately shot back with, “Umm, yes it is!” and proceeded to tell him exactly why he was so wrong.

I’ll spare you the gory details, but let’s just say the rest of the conversation didn’t go well. It gradually got more and more heated until we were the only two people talking (read: yelling) at each other across the table.

In the end, someone shut the argument down by saying, “You’ll just have to agree to disagree.” We both took the hint, retreated into our corners, and glared at each other for the rest of the evening.

A few days later, I was relating the incident to another friend. In all honesty, I was looking for an ally who would help stoke my righteous indignation. But instead of nodding and agreeing with me, she said, “It sounds a lot like you were trying to force your beliefs on him and got mad when he wouldn’t back down.”

This comment stuck with me, and over time I was forced to admit she was correct. I was so caught up in being right that I had refused to accept anyone could believe differently. Even worse, emotion had completely taken over, and I’d made no effort to find common ground or try and see things from a different perspective.

In hindsight, I’ve realized I was missing the larger truth that we all believe we are seeing the world as it should be. Our entrenched beliefs become part of our identity because they help us make sense of the chaotic world we live in. And when someone holds a radically different view to our own, it shakes the foundation of our own beliefs and makes us feel off balance and insecure.

But the good news is, no matter how differently you see the world from someone else, there’s always a way to find some common ground. Here are six tips I’ve learned to help have productive, respectful conversations and open your mind to different perspectives.

1. Focus on the outcome.

When you get bogged down arguing about specifics, take the argument up as many levels as you need until you find common ground.

For example, in the case of climate change, we could have both easily agreed that the environment is important and we want to leave the world a better place for our kids. We just have different views on how to get there. This is a great way to reset the conversation because you’re focused on discussing the outcome rather than winning the argument.

Learning the underlying reason why someone believes something can help you see a different side of the issue. It might not change your mind, but it will help you treat the other person with more empathy and give you fresh ideas to discuss.

For example, someone’s refusal to accept climate change might be caused by concern about the negative effects it will have on their life. Maybe transitioning to renewable energy means they will lose their job or be forced to change their lifestyle in ways they don’t want to accept.

If you can understand these underlying concerns, you’ll be much more likely to find common ground and have a productive discussion.

A stressful argument can hijack the prefrontal cortex—the part of the brain responsible for critical thinking and decision-making. When this happens, you go into “fight or flight” mode and become more likely to react emotionally, think less creatively, and say things without thinking them through.

The next time you find yourself getting angry or defensive in an argument, take a step back and try to de-escalate your emotions by acknowledging them. Once you’re feeling more logical and calm, you can start to look for common ground again.

Active listening is a communication technique that involves hearing, paraphrasing, and responding to what the other person is saying. It’s an essential skill for finding common ground because it shows that you’re genuinely interested in understanding their perspective.

The next time you’re in an argument, try repeating back what the other person has said in different words to make sure you’ve understood them correctly. Then, add your perspective to what they’ve said. For example, “I can see why you feel that way, but I also think…”

5. Be mindful of your own biases.

We all have biases—it’s part of being human. We want to win arguments, be right, and be liked, so it’s easy to fall into the trap of only listening to information that supports our point of view.

In this case, I was forced to admit that I haven’t actually read any of the climate change research myself. My beliefs are almost entirely based on existing in a bubble with other like-minded people who reinforce those beliefs.

Exposing yourself to different perspectives—even if you don’t agree with them—can help you think more critically about your own beliefs. It might even help you find common ground where you thought there was none.

6. Remember that differing views are important.

If everyone agreed on everything, the world would be a pretty boring place. But even more importantly, differing ideas help to push society forward. They challenge us to think critically about our own beliefs and come up with new solutions to problems.

So the next time you find yourself in an argument with someone, try to see it as an opportunity to learn and grow rather than a chance to prove your point. You might just be surprised at how much common ground you can find.

Every Parent Needs To Know THIS One Simple Truth | Dr. Shefali | Inspiring Women of Goalcast
The Secret To A Life Worth Living | Powerful Motivational Speech by Tom Bilyeu
You Have The Power To Be A Point Of Light | Tyler Perry Inspirational Speech | Goalcast
Morning Routine to Activate Your Brain | Jim Kwik | Goalcast
Jordan Peterson’s Ultimate Advice for Young People | JOURNEY TO SUCCESS