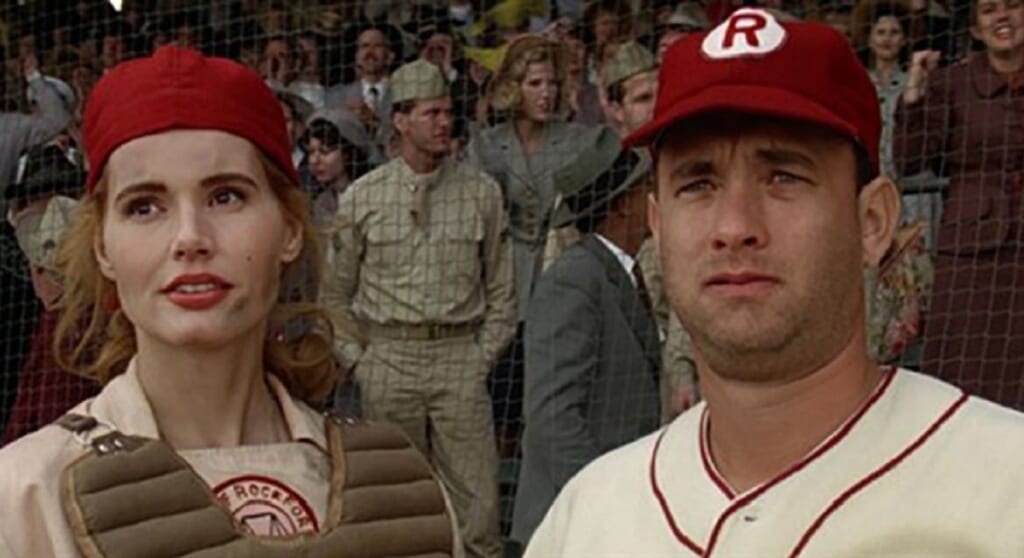 Actor Geena Davis first rose to fame in the 1980s after graduating from Boston University with a bachelor’s degree in drama. She moved to New York City to pursue a career in modeling and acting and quickly booked guest-starring roles in several popular television shows including Remington Steele, Knight Rider, Family Ties, and Riptide.

In 1982, Davis was working as a model, but the fiery redhead quickly rose to fame when she was cast in Tootsie alongside Dustin Hoffman. She starred in several successful films in the 1980s including The Fly, Earth Girls are Easy, and cult classic Beetlejuice. Davis also stole the show when she won an Academy Award for Best Supporting Actress for her work in The Accidental Tourist.

RELATED: Why Natalie Portman Left Marvel Movies – And Why She Returned in Thor: Love & Thunder

The 1990s brought more success Davis’ way with two hit blockbusters that are still wildly popular today: Thelma & Louise and A League of Their Own.

In a bizarre turn, the latter half of the ’90s brought career disappointment with a string of box office failures.

Geena Davis’ Activism Comes From Her Own Experience

Davis worked steadily through her 20s and 30s, she gained fame, fortune, and critical acclaim. Then, she turned 40 and found roles were no longer being offered to her with the same frequency as they had for nearly two decades.

In an interview with Vulture in 2016, she remarked,  “Film roles really did start to dry up when I got into my 40s. If you look at IMDB, up until that age, I made roughly one film a year. In my entire 40s, I made one movie, Stuart Little. I was getting offers, but for nothing meaty or interesting like in my 30s. I’d been completely ruined and spoiled. I mean, I got to play a pirate captain! I got to do every type of role, even if the movie failed.”

RELATED: Jeff Goldblum Never Thought He Would Be a Father Until He Met Wife

While the actor was still beloved by fans, a lack of serious roles was concerning. Davis decided to take an extended break from Hollywood to focus on the bigger issue of how the film industry could be more inclusive. Her amazing journey to activist and role model began.

A League of Their Own marked the 30th anniversary of its release in 2022 and gave Davis a broader platform for her activism. Now 66, she has become an elder stateswoman in the film industry and believes that films and television shows have a long way to go towards righting the wrongs of ageism and inequality in the industry.

Geena Davis Fights For Diversity And Representation In Hollywood

Davis noticed gender issues when her daughter was a toddler. The shows made for entertaining and educating young children were primarily cast with men.

Starting in 2004, she gathered research on the ratio of male to female roles and characters in film and television and took her findings to studios and producers who claimed to be blindsided by how they were not including enough women in their productions.

Davis founded the Geena Davis Institute on Gender in Media in 2007, a non-profit organization that seeks to ensure on-screen representation of gender, race, age 50+, LBGTQIA+, and people with disabilities. Davis and her team aim to ensure that people of all backgrounds appear in film and television. They also work to end the unconscious bias most people have toward people different than themselves and eliminate negative stereotypes in media.

In an interview with Forbes, Davis remarked on this process, saying, “Now, female lead characters in both TV made-for-kids and movies made-for-kids have reached parity, which is very different from when we started. That’s one of our goals. My other big goal is to make the world that the movie is told in reflect real-life – 50% female, 40% people of color, people with disabilities, LGBTQ – that’s my goal.”

Davis has been particularly focused on gender representation in films and television and commissioned a study on gender bias in children’s media. The study found that between 1990 and 2004, a whopping 72% of speaking characters in G-rated films were men. The lack of representation for young girls to aspire to was alarming, to say the least.

Davis was also disturbed by the hyper-sexualization in film and found that women were more than five times as likely as men to be shown in sexually revealing clothing. This was something she’d experienced herself.

RELATED: What Kate Pearson from “This Is Us” Can Teach us About Self-Actualization

In a 2019 interview in USA Today, she revealed she’s experienced “the sort of everyday garden-variety sexism” women experience in Hollywood. In one instance of this, a director asked her to act out a sexy scene while sitting on his lap. She remarked she didn’t know that saying no was an option.

In 2015, Davis founded the Bentonville Film Festival. The goal of the Arkansas-based festival is to build a lineup of movies of which the majority come from women, BIPOC, LBGTQIA+, disabled, and other groups of filmmakers that have been historically excluded. The festival celebrated its eighth year in business in 2022 with the tagline: Championing Women and Diverse Voices.

The Bentonville Film Festival runs both virtually and in person. It aims to foster inclusivity in media and the film and television industries to create a positive influence on society.

The 2022 Bentonville Film Festival lineup is comprised of more than 82% of filmmakers who identify as female or gender non-conforming. Of those, 65% are Black, Indigenous, Asian or Pacific Islander, or a person of color. LGBTQIA+ filmmakers account for 62% of the lineup, 42% are over the age of 50, and 20% of this year’s slate come from people with disabilities.

Not only a model, actor, writer, director, and activist, Davis is also a Mensa member and narrowly missed out on a spot with the U.S. Olympic archery team at the 200 Summer Olympics (a sport she took up at 41).

Geena Davis is one of the good guys fighting for the inclusion of people generally underrepresented. She’s truly an ally of the underdog. And proof that no one can dictate what you can accomplish at any age.

You Have The Power To Be A Point Of Light | Tyler Perry Inspirational Speech | Goalcast
Morning Routine to Activate Your Brain | Jim Kwik | Goalcast
How to Persist, Be Patient and Succeed | Jordan Belfort | Goalcast
Every Parent Needs To Know THIS One Simple Truth | Dr. Shefali | Inspiring Women of Goalcast
The Secret To A Life Worth Living | Powerful Motivational Speech by Tom Bilyeu