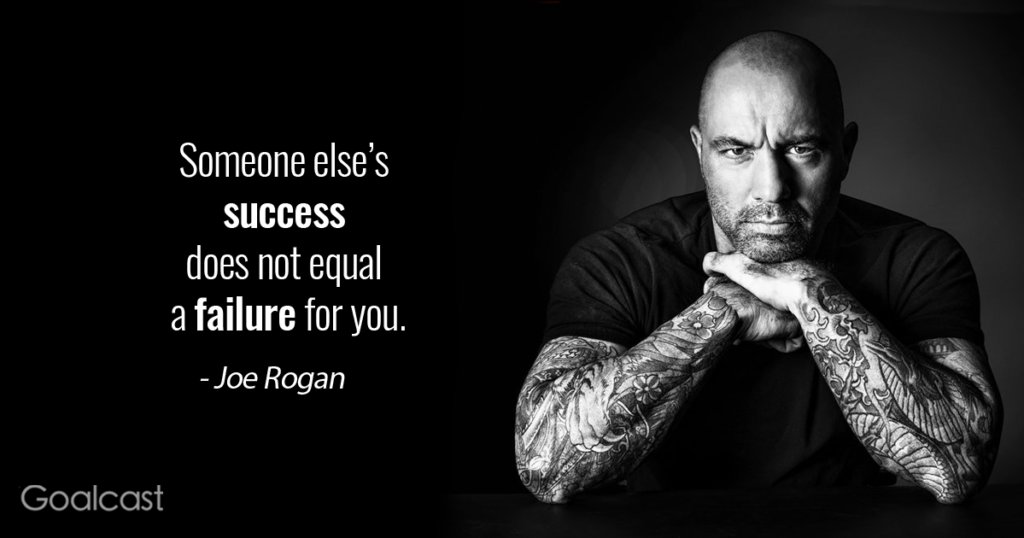 Joe Rogan wears many hats. He is the host for The Joe Rogan Experience podcast on Spotify and a UFC color commentator. Of course, the 54-year-old cut his teeth on fame as a standup comedian, and then as a star on the sitcom News Radio, before becoming the presenter for the TV show, Fear Factor. Rogan has come a long way over the years, but these days may be best known for his controversial opinions.

Rogan has a legion of faithful fans of his podcast and his opinions — and just as many detractors — but how did he become the target of a meme about his height? With a weird rumor going around that he is really 5’3”, both his fans and haters have wondered the truth about his real height. But perhaps the bigger question here is less about one man’s stature, and more about what the proliferation of these rumors and memes says about society.

In June 2021, above the skies of Los Angeles, a skywriter wrote out a message which said, “Joe Rogan is literally 5’3.” That message turned out to be part of a marriage proposal that was followed by the sky-written words, “Will You Marry Me,” Insider reported.

Twitter and Reddit users immediately made Rogan a trending topic, noting this odd happenstance and debating his height. For the record, at the time, Google listed Rogan’s height as 5 foot 7 inches tall. Rogan, meanwhile, claims he’s 5’8”.

People who claim to have met him say he’s taller than 5’3” but definitely not more than 5”5” tall. A quick Google search of ‘Joe Rogan height’ reveals a slew of photos of the UFC commentator appearing to be on the shorter side of the national average height, and varying “confirmations” showing him next to other stars whose heights are less in question. It all remains a mystery, but his rumored height of 5’3″ does seem to be a tall tale.

Whether Joe Rogan is the 5’8” tall he claims to be, the fact is to be at least average, he’d have to be an inch taller. The average height for men in the United States is 5’9”.

Now, this varies from state to state, though, so if Rogan wants the “How tall is Joe?” debates to end, he just needs to point out that the global average height for men is just a hair under 5’6”. Of course, this is assuming he is not exaggerating his height, which as Men’s Health points out, most men do.

Women generally assume if a man is under 6’0, the height he claims to be is one to two inches shorter. There’s no need to wait, applying that principle to Joe Rogan’s claimed height of 5’8” would make him 5’6”, though of course this is, again, all guesswork. Comparing photos of him next to other people back up the fact that it is likely Rogan is actually 5’6” — so, he’s taller than 5’3” tall and shorter than 5’8” tall.

Why would he lie about his height? Men are generally rewarded (consciously or subconsciously) for being taller. Taller men are seen as more masculine, more successful, more virile, more attractive to women (which is, of course, totally subjective as many women like shorter men), and more able to succeed in life. Fair or not, this is why this conversation is even being had.

For the purposes of this article, Goalcast is going to assume Joe Rogan is 5’5” tall or just under it. Other well-known people who clock in at this height or shorter include rapper Lil’ Wayne, Bruno Mars, Daniel Radcliffe, and Charlie Chaplin, who were all 5 foot 5 inches tall. Actor Seth Green and comedian Kevin Hart are 5 foot 4 inches tall and legendary director Martin Scorsese is 5 foot 3 inches tall. The late, great Prince was just 5 foot 2 inches tall.

CelebrityNetWorth.com lists the net worth of Joe Rogan at $120 million. Rogan holds his own among this esteemed group of entertainers but he is far from the richest. Rogan is richer than Daniel Radcliffe ($110 million) and Seth Green ($40 million). However, Lil Wayne ($170 million), Bruno Mars ($175 million), Martin Scorsese ($200 million), Prince ($200-300 million), Charlie Chaplin ($400 million adjusted for inflation from $100 million at time of death), and Kevin Hart ($450 million) are all under 5 foot 5-inch men who are richer than Joe Rogan.

What Are Joe Rogan’s Other Controversies Besides Height?

On his podcast, Rogan discusses current events, comedy, science, politics, philosophy, and hobbies with a rotating panel of guests.

During the COVID-19 pandemic, Rogan faced some heat for his anti-vaccine stance. In December 2021, Rogan interviewed Dr. Robert Malone, a scientist who is critical of the mRNA technology used in the vaccines against COVID-19. Malone made disproven claims, including saying that vaccinated people put people who already had COVID-19 at a higher risk.

RELATED: Who Is Chris Evans’ New Girlfriend, and What Does His Love Life Say About Dating?

After Rogan contracted COVID-19, he used the largely disproven treatment that included the horse dewormer ivermectin, a controversial drug that is not approved by the FDA as an effective treatment for COVID-19.

Some of his listeners took the same course after infection and were allegedly hospitalized from the use of the veterinarian version of ivermectin. As a result, 270 doctors and scientists wrote an open letter to Spotify criticizing Rogan’s long track record of offering misinformation about the pandemic and vaccines while promoting unproven treatments.

What Does The Popularity Of The Joe Rogan Height Memes Say About Us?

Internet commenters can be brutal. When the question of Joe Rogan’s actual height hit Reddit, Twitter, and other online forums, users latched onto it. They created memes of him standing next to various people and comparing his height to theirs. For instance, a photo of Rogan next to 5’8” MMA athlete Domnick Cruz shows that Rogan is markedly shorter than him. Now, this may be true, but those images may also, of course, be photoshopped.

Snopes.com says the rumor that Joe Rogan’s height is 5’3” is false and yet the internet forums cannot let it go, largely because Rogan has such “bro” energy and bravado that the idea of him being shorter than the average American man brings glee to his detractors.

One aspect to consider is that Joe Rogan may be in on the joke about how tall he is. After all, as the saying goes, there’s no bad publicit. If Las Vegas put odds on it, they’d favor the fact that Rogan is enjoying the publicity of the debate over the entire Joe Rogan’s height drama.

Rogan is, after all, a comedian first and foremost, so it’s not hard to believe that he’s both in on the joke and enjoying the debate about his height. After all, with a net worth of $120 million, he can take his 5 foot 3, 5 foot 5, or 5 foot 8 self, whatever his actual height is, and laugh all the way to the bank.

Confessions of an Extrovert: Why I Now Love My Alone Time
Here’s How Sleep Deprivation May Be Preventing You From Becoming Successful
How I’m Healing from Abuse After Going in Circles for Years
The Rise of Damien Rider – Extreme Endurance Adventurer | Surviving Unimaginable Abuse
The Rock Records a Video With His Stunt Double – But the Real Reason for Filming Left Him in Tears