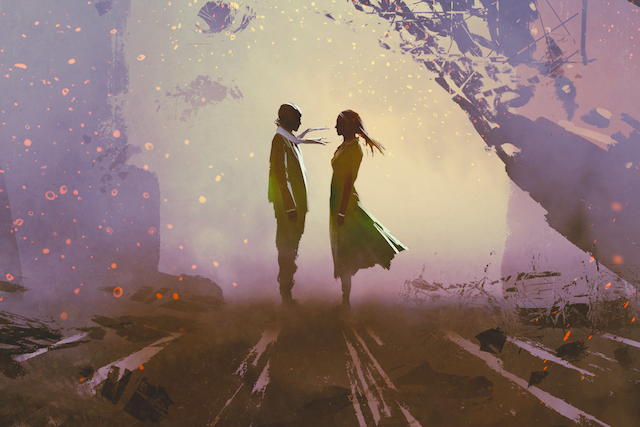 “It’s okay to let go of those who couldn’t love you. Those who didn’t know how to. Those who failed to even try. It’s okay to outgrow them, because that means you filled the empty space in you with self-love instead. You’re outgrowing them because you’re growing into you. And that’s more than okay, that’s something to celebrate.” ~Angelica Moone

I thought I had married the love of my life. I had never felt a connection so strong before. I was sure he was my soul mate, and I thoroughly believed he was my twin flame—my one and only.

I can’t even begin to tell you the horror that started to unfold after we got married. The accusations that my beloved other started to hurtle at me. That I didn’t care about him and I didn’t love him enough. He was convinced I was having affairs behind his back, and conspiring against him, and was clearly out to take his money.

I was not just perplexed by this, I was shattered. How could he not see that I loved him unwaveringly, without question, and that I never even considered having eyes for anyone else? And trying to take his money? That was incredibly bizarre because I discovered, contrary to his initial proclamations, that he hardly had any.

Yet I didn’t care. I loved him. I tried to love him, and I was convinced that my love would be enough—that he would know that I loved him, and we would soon return to the comfort and the knowing that our love for each other was real, safe, and forever.

No matter how much I tried to love him, things were spiraling out of control. I couldn’t be five minutes late from the supermarket without suffering his wrath. Life outside of “us” was getting smaller and smaller.

If I looked out the window, I was thinking the wrong thing or looking at something the wrong way. If I didn’t take his hand when we were together, I was advertising that I was single. Visiting friends or family or working outside of the property became as possible as flying to the moon.

Eventually it happened: I stopped trying to love us back to unity and fought back. Initially to try to stop the despair that he didn’t trust me, then for my literal sanity, freedom, and autonomy. Without these things I was losing my soul.

None of it worked. As my attachment to him became more panicked and devastated and I was losing control of my reactions, his abuse accelerated, and then I realized I was coming close to losing my life.

I had complicated post-traumatic stress disorder. I shook. I sweat. I couldn’t eat. I could barely sleep. Everything and everyone I cared about was turning away from me.

I had married a narcissist. I didn’t realize it at first, because back then, fifteen years ago, not many people were talking about narcissism.

I had always believed that narcissists were arrogant people who were “up on themselves.” I had no idea that they were people who presented in our lives offering the love, total acceptance, validation, and “life” that we thought we had wanted our entire life. I had no idea that someone like this could enter my life and they would feel so right to fall in love with.

The day that the word “narcissist” popped into my head, and I googled it, I nearly fell off my chair. I was ticking every point that was so “him” off a list of traits and behaviors. I was in shock.

Entitled—tick. Can’t take personal responsibility for wrongdoings—tick. Has hair-trigger reactions to things that most adults don’t get bent out of shape about—tick. Argues in circles in ways that make your head spin—tick. Pathologically lies while looking you straight in the eye—tick … and on and on the list went. I needed to get to the punch line: Could a person like this be fixed? Could they get well from this disease?

I searched high and low; I turned over every possibility and read all the research I could find. The answer was a flat “no.” Then, believing there is always a solution, I was determined to heal him, to fix our marriage, to return to the dream of the “one and only” that I just knew he must have been.

It didn’t turn out well. In fact, it turned out terribly. Now I was experiencing things I never believed I could or would: Mental and emotional abuse that had me curled up in a corner. Physical abuse that had me fearing for my life. Financial abuse that was ripping my life to shreds. At times, for self-preservation, I had to escape. Eventually, I left him and relocated.

But I wasn’t getting better away from him. I was totally unprepared for feeling so haunted. By the fact that he was in the home I had bought, seeing other women and seemingly having a great life while I was so empty, devastated, and traumatized that it hurt to breathe, it hurt to live, and I thought that I was going to die.

I returned to him countless times. Either because he would contact me and promise to change, or I missed him so much I couldn’t function.

Every time I returned, it got worse. The makeup periods were briefer, and the explosions more damaging and horrifying. Then, I broke. I had a complete psychotic and adrenal breakdown. I was told I would never heal from it and would need three anti-psychotics to be able to function, but I would never be the same again. I was told I now had permanent brain and nervous system damage.

Of course, he didn’t care. He did what he had always done when I needed him—he discarded me. It was then that I decided to die. So, I started trying to formulate how to do this in the kindest way for my family and son.

However, my soul had a different idea for me. A voice in my head kept insisting, “No, there is another way.” I thought it was just my madness speaking. I argued with it, but it wouldn’t let up. In desperation I walked into my bathroom, fell on the mat, put my hands in the air, and shrieked, “Help me, I can’t do this anymore!”

In that moment the most incredible thing happened. It was like my head parted and the blinding truth entered me. I had never known such clarity in my entire life. Maybe you have to be “out of your mind” to really know the truth?

The voice in my head told me that my husband was a catalyst. He was never meant to grant me my “self” and my “life”; rather he had come into my life to show me the parts of myself that were unhealed, that I hadn’t healed yet, to generate my true self and true life.

A whirl of incidents and truths flashed into my mind. The ways I was so hard on myself and was always needing more, saying to myself, “Melanie, I can’t even like you (let alone love you) if you don’t get your to-do list all done, if you don’t lose ten pounds, if you don’t look like this or that … “ and how he had treated me the same—as not good enough, right, or acceptable.

How I had always kept busy rather than “be” with myself, care, validate, and love myself. How I had terminally self-avoided and self-abandoned my inner being, and how I had yelled at him, “You don’t even know who I really am!” yet had never taken the time to have a real relationship with myself.

I knew that if I let go of him, healed, and came home to my inner self, I would recover. I would save my sanity, life, and soul. I knew I could heal, get better, and do better. I knew that finally my life and love could be real and work.

I knew this because in this divine intervention experience, I had been thrust into a vision in the future where I was healed and whole, and I had felt it for real. I saw who I was. I saw what I had and most importantly, I felt who I had become.

He wasn’t the healer of my wounds; he was the messenger of them instead.

I let go. I turned inward. I healed.

This I now know at the highest level of truth: A twin flame, as the nemesis who reflects back to us our unhealed parts in intensely painful ways, offers the greatest love of all—the returning home to ourselves. From there my life has blossomed, from this true relationship with myself, life, and others in ways that I could never have previously imagined.

I am love. I am self-acceptance. I am free.

Melanie Tonia Evans is a global narcissistic abuse recovery expert and the creator of the Quanta Freedom Healing method and the Narcissistic Abuse Recovery Program (NARP). Melanie’s leading edge healing methods have helped thousands of people make astounding full recoveries from toxic relationship abuse. She is the author of You Can Thrive After Narcissistic Abuse—The #1 System for Recovering from Toxic Relationships.  For more information, you can view her website at https://www.melanietoniaevans.com.