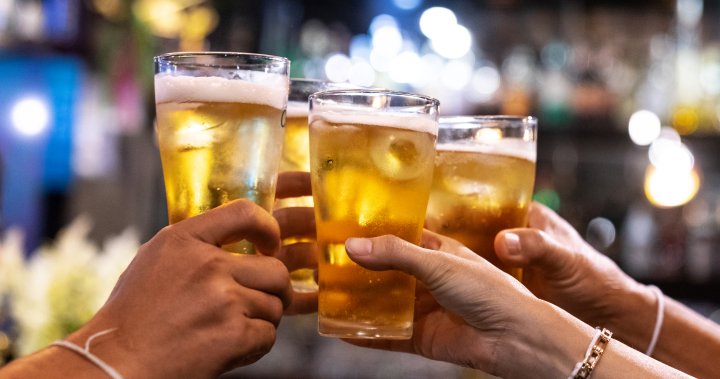 A study, the first of its kind in the world, has found that people under the age of 40 risk their health if they drink more than a few sips of beer or wine per day, and recommends that young people not drink alcohol at all.

These findings are part of the wider Global Burden of Disease (GBD) study, a comprehensive research program that was started in 1990 by the World Bank to assess disability and mortality on a global scale.

This analysis on alcohol consumption was funded by the Bill & Melinda Gates Foundation and published in The Lancet on July 14. It’s the first study on alcohol use that breaks down risks by geographic region, age, sex and year.

The study reports that young adults between the ages of 15 and 39 face only health risks, no benefits, when drinking alcohol, and are also the most likely to drink excessively.

Using a massive data set across 204 countries that looked at health outcomes for men and women aged 15 to 95 years between 1990 and 2020, researchers were able to estimate the average daily intake of alcohol that posed little to no risk to a population.

For those under 40, the recommended amount of alcohol that people can consume before they take on extra health risks is only about 15mL of wine or 50mL of beer, or “a little more than one-tenth of a standard drink.”

A standard drink was defined in the study as 10 grams of pure alcohol (100mL of wine, 375mL of beer, or 30mL of liquor). Using this template, researchers found that young people start risking their health after drinking 0.136 standard drinks a day.

‘She couldn’t take the pain’: N.B. couple get turned away at several ERs

“Our message is simple: Young people should not drink, but older people may benefit from drinking small amounts,” said Dr. Emmanuela Gakidou, a professor of health metrics sciences at the University of Washington School of Medicine’s Institute for Health Metrics and Evaluation, in a press release.

“While it may not be realistic to think young adults will abstain from drinking, we do think it’s important to communicate the latest evidence so that everyone can make informed decisions about their health,” she added.


Public health officials certainly have their work cut out for them in trying to reduce rates of drinking amongst young people, as the researchers found that 60 per cent of people across the globe who consumed unsafe levels of alcohol in 2020 fall into the 15 to 39 age bracket.

Currently Canada is ranked 44th in the world for alcohol consumption based on a 2019 report by the World Health Organization and our per capita drinking rate is well above the global average.

But while young people are being advised to cut down on drinking, the study found that older adults can benefit from a drink every now and then.

People over the age of 40, with no underlying health problems, can consume “a small amount” of alcohol every day to “provide some benefits, such as reducing the risk of ischemic heart disease, stroke and diabetes.”

Those between the ages of 40 to 64 can safely consume about half a standard drink to almost two drinks a day, with more precise estimates varying by sex and region. People aged 65-plus can have just over three standard drinks, based on the findings.

So, according to the study, though drinking in one’s youth can be hazardous to their health, once they get older, consuming alcohol can actually be a benefit.

Taryn Grieder, an assistant professor in the psychology department at the University of Toronto, said she isn’t surprised that the GBD found only health risks for young people who drink.

“Their brains aren’t finished developing until they’re between 25 and 30 years old, so I’m really not surprised,” she said. “Alcohol is a depressant on the brain. So it’s kind of shutting down normal functioning.”

One of the aims of the study was to inform public health policy makers about the risks associated with alcohol, and encourage countries to reassess their guidelines on safe drinking habits.

For this reason, the authors of the study call for alcohol guidelines to stress consumption levels by age to make a distinction between when in one’s life it is safer versus more hazardous to drink.

2:16
Rethinking the wine-to-unwind culture amid the pandemic

Rethinking the wine-to-unwind culture amid the pandemic – Jul 13, 2021

The researchers also emphasized that countries need guidelines specifically tailored to men under 40, as they represent the group who is mostly likely to use alcohol harmfully.

Around 77 per cent of people who drank to excess in 2020 were male, yet Canada’s guidelines suggest that men can safely drink more than women.

Grieder says those recommendations based on sex are considering the difference between male and female body composition and metabolism, but that guidelines must change in the wake of these findings.

“The wording needs to be revisited in terms of the low-risk drinking guidelines, because now we can see that there really isn’t low risk,” she said. “It’s risky regardless of how much consumption is going on.”

The real issue lies in how public health authorities can communicate this risk to young people.

Grieder noted that “there’s this idea that if we arm young people with information that they’re going to use it, but they are at this period where they feel quite invincible in a way.”

A culture shift in drinking is unlikely to happen in the same way that attitudes changed about the use of tobacco, because the danger isn’t as immediately obvious. While lung cancer was the poster child against smoking, there is no singular “big bad wolf” tied to drinking.

According to Grieder, alcohol is a health risk, “not only for the physical effects, but the long term psychological mental health effects are also pretty significant.”

Sleep is one major area that is affected by alcohol, Grieder says, and people aren’t aware enough about the negative impacts that not getting a good night sleep can have.

“There’s lots more accidents that are caused by alcohol use,” she added.

This awareness of other complex factors that impact health is part of the “biopsychosocial” approach.

“Biological in the sense of what’s happening physically to the body, but including the effects of psychological events, like suicide,” Grieder said.

“Depression is linked with alcohol use as well.”

This danger that drinking poses to mental health and increasing the likelihood of an accident all contribute to shaving years off a person’s life. And Grieder has observed that it’s not going away any time soon.

“Consumption is increasing, especially coming out of the pandemic. People are thinking that it’s time to get out there and live their life, because they’ve been restricted for so long.”

While it’s unlikely that young people will stop drinking altogether, this study suggests it time to change social perceptions on what is considered risky behaviour.