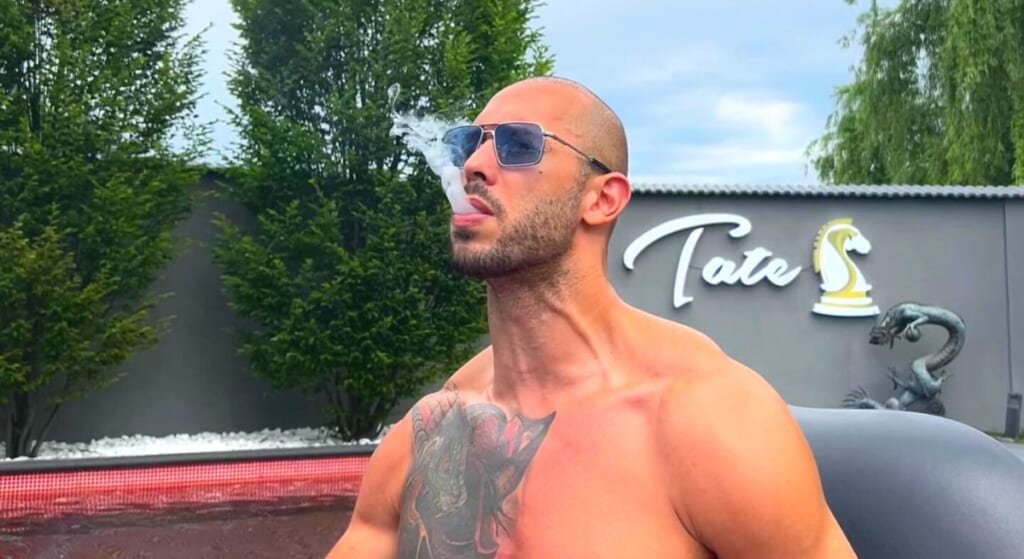 British-American kickboxer Andrew Tate has become one of today’s biggest influencers by posting divisive content that calls into question the legitimacy of mental health, a woman’s role in society, and what it means to be a man.

Youtube has no issues posting his commentary as it pull in millions of dollars in monthly ad revenue. But as of late, both Facebook and Instragam have banned Andrew Tate from their platforms.

RELATED: 5 Daily Habits to Steal from Joe Rogan, Including His Bulletproof Attitude Towards ‘Haters’

Tate’s videos have been viewed over 11.6 billion times to date, according to The Guardian, and in July 2022, more people in the UK Googled his name than Donald Trump or Kim Kardashian. So who is Andrew Tate and why do so many want him banned from TikTok? We explain.

Who Is Andrew Tate?

Andrew Tate grew up in Luton, England and worked as a TV producer before becoming a professional kickboxer. In 2016, he was cast on the British version of Big Brother but was kicked off by producers after The Sun showed them a video of Tate hitting a woman with a belt and slapping her face. Tate claimed the footage was of consensual roleplay.

After his dismissal from the show, Tate continued making headlines by sharing controversial opinions on social media. In 2017, for example, he tweeted that depression isn’t real and argued that women need to “bear some responsibility” if they are victims of sexual assault or harassment. He tweeted, per Metro, that “a man looking at you or whistling at you or asking your name isn’t harassment.” He also argued that some of Harvey Weinstein’s accusers weren’t victims but opportunists.

RELATED: R. Kelly’s Sadistic 30-Year Rampage Is Our Fault and We Have to Do Better

In addition to making such incendiary statements, Tate also likes showing off his wealth (think expensive cars, fancy cigars, and lavish holidays) on his Instagram and telling his 4.4 million followers how to get rich and live life like a man’s man.

What’s more, he runs a subscription service called Hustler’s University which has 127,000 members and counting. As Tate explains on the website, for £36 (or about $44) a month, men can become part of “a community where me and dozens of War Room soldiers will teach YOU exactly how to make money.”

Tate claims he wants to teach men how to be the best version of themselves, but according to critics, his rhetoric is dangerous. He’s been called “the scariest man on the internet” and the “king of toxic masculinity” as his Instagram posts and TikTok videos often spread misogynistic views and worrisome ideals.

For example, Tate has said that women belong to men, that women shouldn’t be allowed to drive, that “men can cheat but women can’t,” that “breakfast breeds arrogance and laziness” because you shouldn’t eat food “you didn’t have to hunt and kill,” and that “a life without trauma cannot create a man — it creates a weakling.”

RELATED: The Tragic Tale of Nikocado and the Dangerous Effect Tik Tok Fame Has on Mental Health

As journalist Nicola Thorp argued in a Metro opinion piece, “those Andrew Tate TikTok videos pose a very real threat to women [because] his content directly appeals to young, lonely men who blame women as the source of their misery.”

And she’s not the only one voicing concern. Zainab Gulamali, the policy and public affairs manager at Women’s Aid (an organization helped domestic violence victims), told MailOnline that she believes Tate’s content “normalises the misogynistic and sexist attitudes which are at the root of all violence against women and girls.”

Making matters worse, Tate’s offline behavior has also raised red flags. In April 2022, Tate and his brother, Tristan, had their home raided by police who received a tip that a woman was possibly being held in the house against her will. No arrests were made, but according to The Daily Beast, they’re now being investigated for human trafficking.

Both Andrew Tate and his brother are adamant that they’ve done nothing wrong and the influencer has fired back at critics, saying he’s not the problem, they are. In August 2022, Tate announced on Instagram that he would donate “significant funds” to charities supporting survivors of domestic violence, as well as charities helping men with mental health. “I support men and stick up for them, and the haters and liars think this means I hate women,” he explained, writing, “We can support men and women.”

Is Andrew Tate Banned on TikTok?

Andrew Tate has been kicked off of Twitter multiple times, but the platform mistakenly verified him in January 2022. However, the ban appears to be back in place now, but he’s still active on Instagram and TikTok.

RELATED: TikTok Star Has The Best Response To Bullies Who Think Her Relationship With Her Husband “Doesn’t Make Sense”

TikTok has said that it does not tolerate hateful speech or misogyny and that it’s “working to review this content and take action against violations of our guidelines.” All the while, Tate’s popularity continues to grow. According to The Guardian, he uses copycat accounts and members of Hustler’s University to promote his content on TikTok and cheat the algorithm — something TikTok also says isn’t allowed.

How to Protect Your Family From Influencers & Dangerous Ideologies

The harmful effects of toxic masculinity impact everyone in society. As John Carnesecchi, a psychologist and licensed clinical social worker, told Shape, “This toxicity can affect the physical and mental health of women, non-binary people, and men, too.”

Not only does toxic masculinity propagate misogynistic views, but it tells men that they need to be dominant, suppress all emotions, and be unapologetically tough in every situation. That, in turn, can take a real toll on their physical and mental health. Indeed, a 2019 study even found that “social media makes toxic men more depressed.”

Unfortunately, these unhealthy ideals are promoted by some of today’s biggest social media sensations, like Andrew Tate, and once a video goes viral, it’s hard to stop. What can you do to ensure your family isn’t influenced by such rhetoric?

It can be hard (nearly impossible, even) to stop a child from seeing problematic content on social media. Given that the minimum age to join TikTok is just 13, this can be particularly dangerous. The key is to communicate openly and frequently.

As Parents Together suggests, it’s important to speak to your child about the pitfalls and dark side of social media and explain to them the red flags they should be looking out for. Encourage them to ask questions and speak to you honestly if they see something that strikes them as not quite right.

What’s more, Scary Mommy underscores the importance of showing young boys that embracing their emotions is not just acceptable, it’s desired. Equally valuable is teaching them that stereotypical divisions between what’s “manly” and “girly” are to be ignored and that having female friends is healthy. The outlet also suggests picking up an educational, age-appropriate book or two, like Tough Guys Have Feelings, Too or The Boy with Big, Big Feelings.

Last but not least, always lead by example. Children learn from those around them and if they see you eschewing gender stereotypes, they’re more likely to do the same.

From Mean Girl to Dropout: How Amanda Seyfried Beat a Poisonous Hollywood Stereotype

You Have The Power To Be A Point Of Light | Tyler Perry Inspirational Speech | Goalcast
Jordan Peterson’s Ultimate Advice for Young People | JOURNEY TO SUCCESS
Every Parent Needs To Know THIS One Simple Truth | Dr. Shefali | Inspiring Women of Goalcast
The Secret To A Life Worth Living | Powerful Motivational Speech by Tom Bilyeu
How to Persist, Be Patient and Succeed | Jordan Belfort | Goalcast